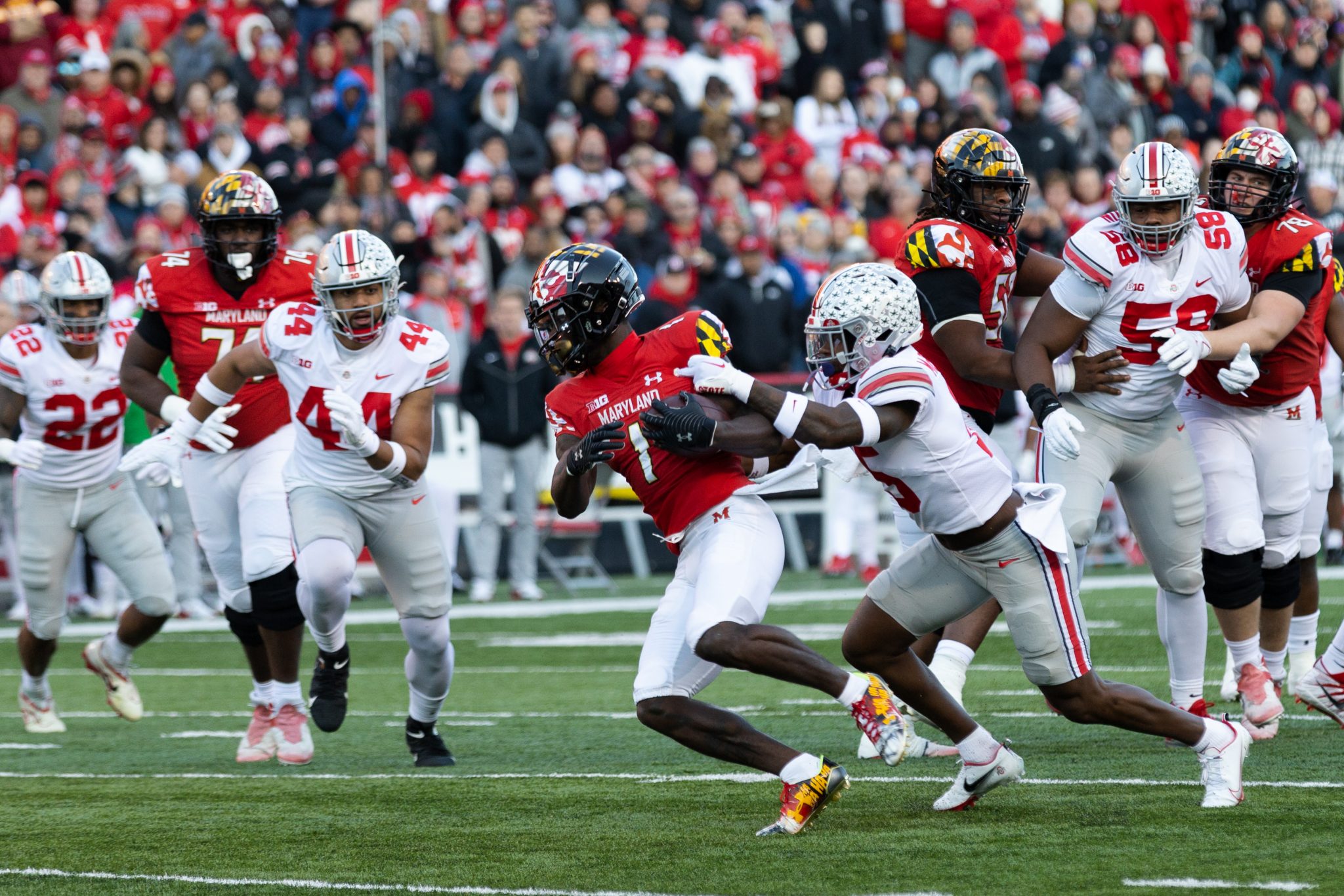 Maryland football had one last chance to pull off one of the biggest upsets in program history.

After forcing Ohio State into a late field goal to push its lead to six points, the Terps had 42 seconds to procure a game-winning touchdown drive for their first win against a top-two team since 1955.

But Maryland’s hopes quickly faded. Deep in his own territory, quarterback Taulia Tagovailoa was stripped by an Ohio State defender who waltzed into the endzone for a game-sealing touchdown.

The Terps’ furious comeback fell just short under the SECU Stadium lights as they dropped their third straight game of the season to No. 2 Ohio State, 43-30.

“I’m really proud of our team,” head coach Mike Locksley said. “We’re never satisfied with a loss, obviously, but what you saw today is us go blow-for-blow with a team that I consider to be one of the best in the country.”

Maryland’s comeback bid came just after the Buckeyes had seemingly blown the game open. Ohio State running back Dallan Hayden had just powered his way into the endzone to give his team what looked like a two-touchdown lead in the fourth quarter in College Park.

But Deonte Banks blocked the Buckeyes’ extra point attempt, and Jakorian Bennett scooped the ball off the turf and into the endzone.

That momentum swing brought on Tagovailoa and the offense. Facing a second and 10 at the Maryland 42 yard line, he stepped up in the pocket and floated a high-arcing ball to Rakim Jarrett, who brought the pass in for a 49-yard gain.

Moments later, the Terps were just one yard from drawing a touchdown closer to the No.2 Buckeyes.

Coach Mike Locksley entrusted Roman Hemby with the ball on the first of two attempts to punch the score in, but he was stuffed shy of the goal line.

That forced the Terps to make a difficult fourth-down decision. Tagovailoa pleaded with Locksley to keep his offense on the field, confident in his ability to make a game-changing play.

“It was just the feel of the game,” Tagovailoa said. “Especially when you’re playing against a team like that, you always want to make good use of your opportunities.”

The coach obliged and his quarterback delivered.

He rolled right, evading a swathe of Buckeye defenders before finding Jeshaun Jones in the endzone for the score.

“Jeshaun did a really good job of doing the scramble drill, especially in the red zone … I just found him,” Tagovailoa said.

But despite his late heroics, the Terps came up just short in the end — watching the clock dwindle as their hopes for their first win over a top-two opponent faded.

It was a disappointing end to a sparkling day for the junior quarterback, who completed 26-36 passes for 293 yards and three total touchdowns. He became the program’s all-time passing yard leader in the loss.

The quarterback’s offense had scored just 10 combined points over the past two weeks on the road against Wisconsin and Penn State. Tagovailoa set career-lows in passing yards on consecutive weeks as offensive coordinator Dan Enos’ once-potent offense stalled against its Big Ten foes.

But in the first half Saturday against the No. 2 Buckeyes, Maryland found life.

It started on the first offensive play with tight end CJ Dippre, who caught a Tagovailoa pass before hurdling a defender by the sideline. Minutes later, he hauled in a one-yard pass for the Terps’ first touchdown of the game to give Maryland its first lead of the afternoon.

Dippre was one of nine Terps to catch a pass from Tagovailoa in the opening half. The quarterback completed 16 of his 18 first-half passes for 180 yards and one touchdown, easily surpassing his output over the previous two weeks.

[‘Where are we?’: Maryland football held a heartfelt meeting after Penn State loss]

Wide receiver Dontay Demus Jr. broke out for his best half of the season, catching three of Tagovailoa’s passes. His 58 first-half receiving yards marked his highest output in a game since returning from his season-ending leg injury sustained in 2021.

“[Demus] is a competitor,” Locksley said. “He’s still recovering and getting better and better … today [Tagovailoa] gave him a chance, the offensive line did a pretty good job.”

Maryland’s offensive success came as its defense stepped up to slow the Buckeyes’ attack. Ohio State quarterback C.J. Stroud had trouble finding his receivers downfield in the first half — save a one-handed Marvin Harrison Jr. snag on the opening possession.

Stroud completed just nine passes before halftime. The Terps also slowed the Buckeyes’ run game, holding their running backs to a combined 28 yards on the ground. Maryland got the ball to start the second half but had to punt, a Colton Spangler attempt that was blocked.

Two plays later, the Buckeyes were back in the lead, with Hayden scoring one of his three touchdowns in the game. The Terps entered the game only having given up 16 points in the third quarter but allowed 17 to Ohio State in the frame.

Hayden and the rest of the Buckeye run game racked up 160 yards on the ground, crucial ones late in the game that helped them bleed Maryland’s comeback dry.

“I still feel that the best is ahead for this football family,” Locksley said. “We’re gonna finish this thing out the right way at home next week against Rutgers.”