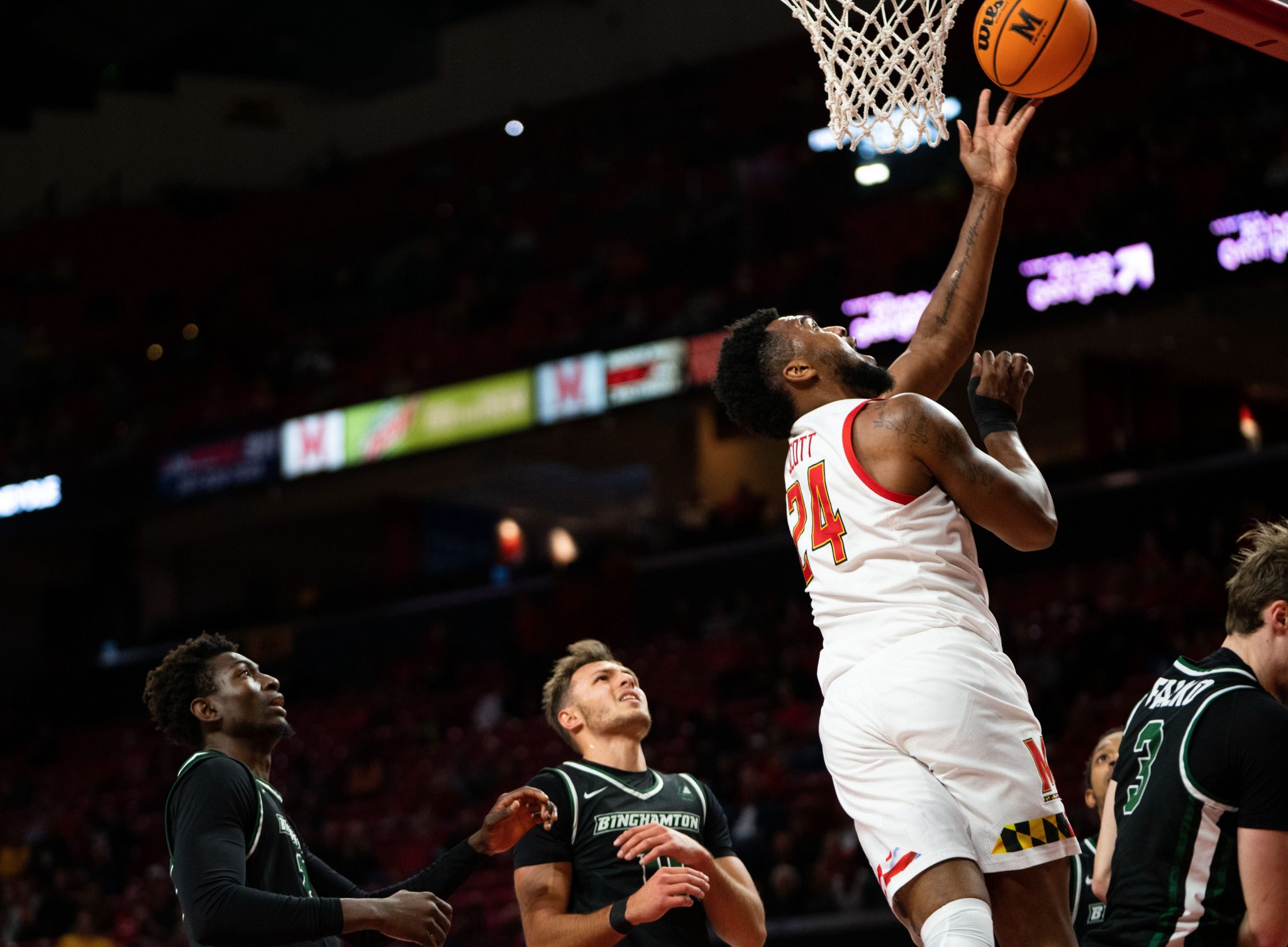 Julian Reese rose up and blocked a weak Bearcats layup before trotting up the court early in the second half.

Just under two minutes later, he got to the basket and got an and-one to fall before sinking the ensuing free throw, showcasing the manner in which the Terps had success both offensively and defensively throughout the night.

Maryland men’s basketball dominated defensively in the paint as it eased to a 76-52 victory over Binghamton Tuesday to advance to 3-0.

The Terps smothered the Bearcats early on, forcing turnovers on each of the Bearcats’ first three possessions. Maryland sprinted out to an 8-0 lead thanks to two field goals from Reese and Jahmir Young.

Three consecutive field goals off Binghamton giveaways from Reese, Hakim Hart and Ian Martinez extended Maryland’s lead to double-digits. The Terps’ advantage grew as large as 25 in the opening half as they held the Bearcats to just 12 points in the first 18 minutes.

Ike Cornish notched his career high in points on two shots just 25 seconds apart after not playing last season. The redshirt freshman stepped through the lane for his first bucket before getting a reverse layup to fall, finishing the game with nine points.

“[Cornish’s] been working hard, really hard,” Reese said. “He’s been working like one of the hardest workers I know really. I feel like he just deserves everything he’s getting right now. I feel like y’all haven’t really seen all that he can do out there.”

Maryland relied on success inside the paint after going 2-for-12 from behind the arc in the opening period. Thirty-two of the Terps’ 44 first-half points came in the paint, with Reese contributing healthily to the total.

The sophomore hit double digits in points for back-to-back games, only the second time he’s done so in his Maryland career. Reese tied his career-high in points a game after setting it and finished with 19 points, seven rebounds and two blocks.

“[Reese’s] started playing a lot more physical,” Willard said. “His duck-ins are getting more physical. I think he’s embracing physicality a little bit. He’s not shying away from it.”

Maryland finished the game with a season-high 48 points in the paint and continued to badger the Bearcats in the second half, forcing 15 turnovers throughout the game.

The Bearcats hit four straight field goals toward the end of the half but were held to a 36 percent shooting percentage and put up 13 less shots than the Terps through 20 minutes. Maryland held a 44-23 lead at the break.

The Terps continued their dominance in the paint on the offensive end early in the second half, as Reese and Patrick Emilien both converted and-one opportunities on drives to the basket to spurn any momentum the Bearcats could have generated with their efficient end of the half.

Maryland saw 13 different players take the floor as it maintained a lead that hovered around 30 points throughout the second half. The Terps notched the most points of the season and won by their widest margin so far this year as they defeated the Bearcats by 24 points.

Willard was glad he could rest some of his starters toward the end of the game ahead of two tournament matchups this weekend and a busy schedule ahead.

“I was hoping that would be the goal,” Willard said. “Just being mindful of really the next, not only this week, but the next two weeks with the amount of games and who we’re playing, making sure we’re not taxing ourselves when we don’t need to be.”