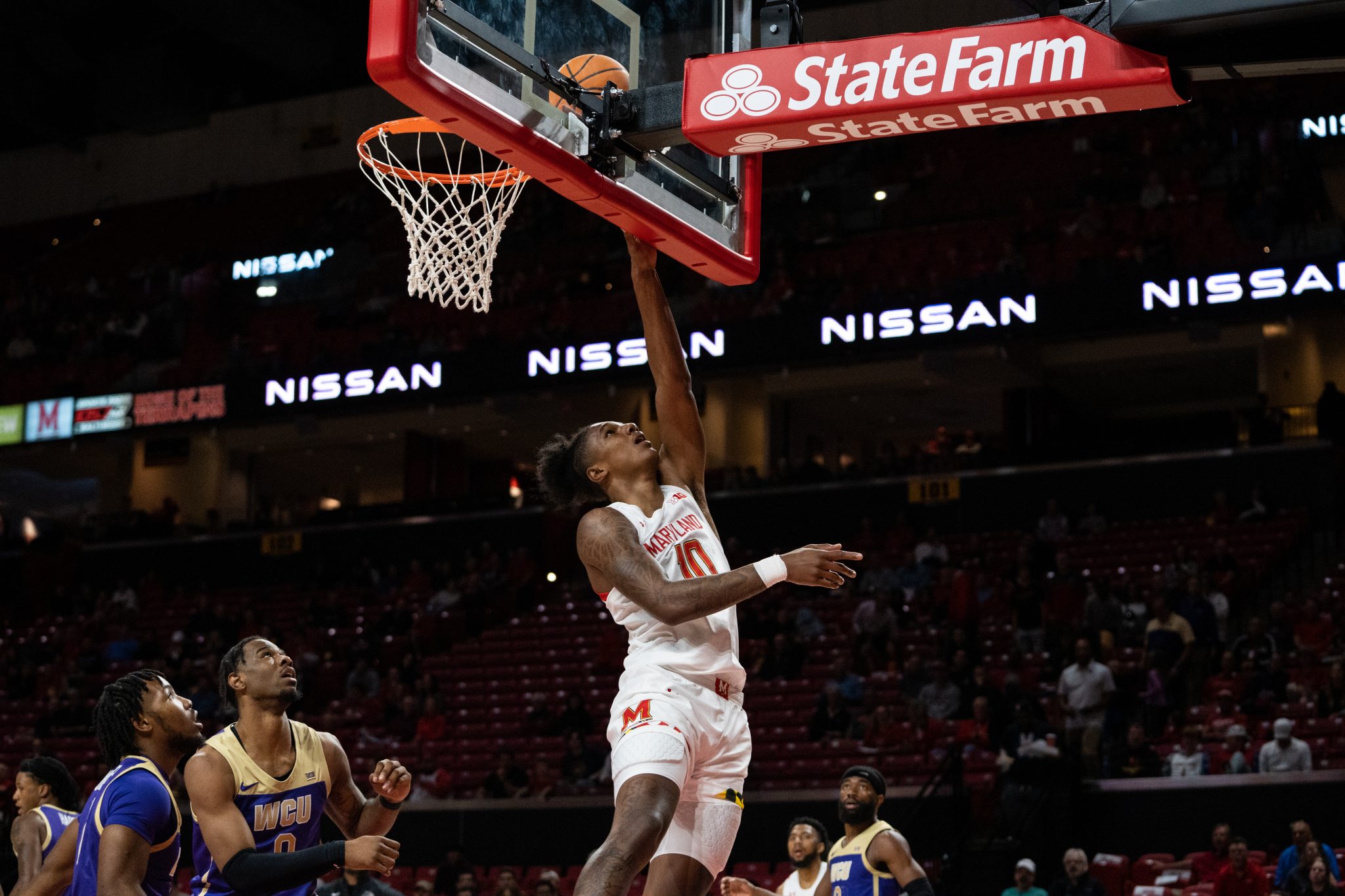 Reese then trailed Jahari Long into the paint — receiving a nifty pass before wiggling his way up to rim while drawing a foul and softly deflecting the ball off the glass and through the net.

The crowd screamed, his teammates flexed and Reese sank the free throw to help guide Maryland to a decisive 71-51 win over Western Carolina, achieving his first career double-double and a career-high 19 points.

“What I saw today was a kid that accepted my challenge and wanted to be dominant,” coach Kevin Willard said. “I think you’re just seeing a small sliver of what [Reese] could be.”

On Tuesday, Reese had no shot attempts in the first half against Niagara. But facing the notably smaller Western Carolina, the sophomore dished out physical play in the paint early and often.

Reese scored 10 of Maryland’s first 14 points as an early emphasis around one of the Terps’ primary big men unraveled. He added his career high in rebounds with 12 on the night.

“Everyday in practice this is the Julian we see,” Willard said. “What I saw in the first game was a guy that didn’t play a whole lot last year [and] had a little nerves in his first game.”

However, Western Carolina’s size disadvantage didn’t stop it from impairing Willard’s squad on the perimeter. The Terps went 0-for-8 from three in the first period to keep the game in reach for the Catamounts.

The Terps covered their inefficient shooting up with suffocating defense, best epitomized by a crowd-pleasing chase down block from Donta Scott midway through the first half on Catamount Colin Granger.

“This is a team that understands that every game we’ve played so far from Virginia to now, we’ve gotten better and better defensively,” Willard said.

Western Carolina kept pace until Jahmir Young and Hakim Hart kicked Maryland’s offense into gear in the last minutes of the first half. Young started the rally off slashing into the paint and down the baseline for a reverse layup with 1:38 remaining in the half, and then followed it up with an and-one with his left hand after a Catamount three.

On the ensuing possession, a lost dribble from Western Carolina’s Tre Jackson floated to Hart for a quick fast break layup, with the guard stutter-stepping a defender on the way to the rim.

Soon after, Don Carey grabbed the ball after a Young block, and lobbed it to a coasting Hart for an easy score. All-in-all, Young and Hart combined for nine points at the end of the half to give Maryland a 32-15 advantage at the break.

“It was important, especially on the defensive end,” Young said. “[Hart] was able to bring that spark for us, I felt that later in the game that also helped.”

After warming up to a pair of Western Carolina scores in the second, the Terps continued the momentum that Hart and Young showcased at the end of the first.

Young called his number numerous times Thursday night as he went 6-for-15 from the field, including a smooth mid-range jumper to jumpstart Maryland’s scoring in the final half.

The Terps’ next two scores originated from a strong Scott layup, his first points of the game, and a Reese layup. Hart didn’t have to wait long to be involved again either as the senior broke open on a fast break and sank Maryland’s first three of the game to put it up 20.

After that, Western Carolina sank and never recovered. Reese’s points midway through the second-half put the Terps on a run that allowed them to coast to the finish line — one that included a thunderous slam from Scott to rile the Xfinity Center crowd up.

Time wound down as Willard guided several bench players onto the floor — Noah Batchelor, Ike Cornish and Ian Martinez among others — as the Terps’ lead stretched to as large as 33.

Western Carolina ended the game on a 14-1 run but the shots fell too late for the Catamounts, as Reese put up one of best games of his career in a Maryland uniform.

“I feel like previous coaches had confidence in me as well,” Reese said. “But for Willard to be so vocal about it, so adamant about it, that brings more comfortability in my game.”