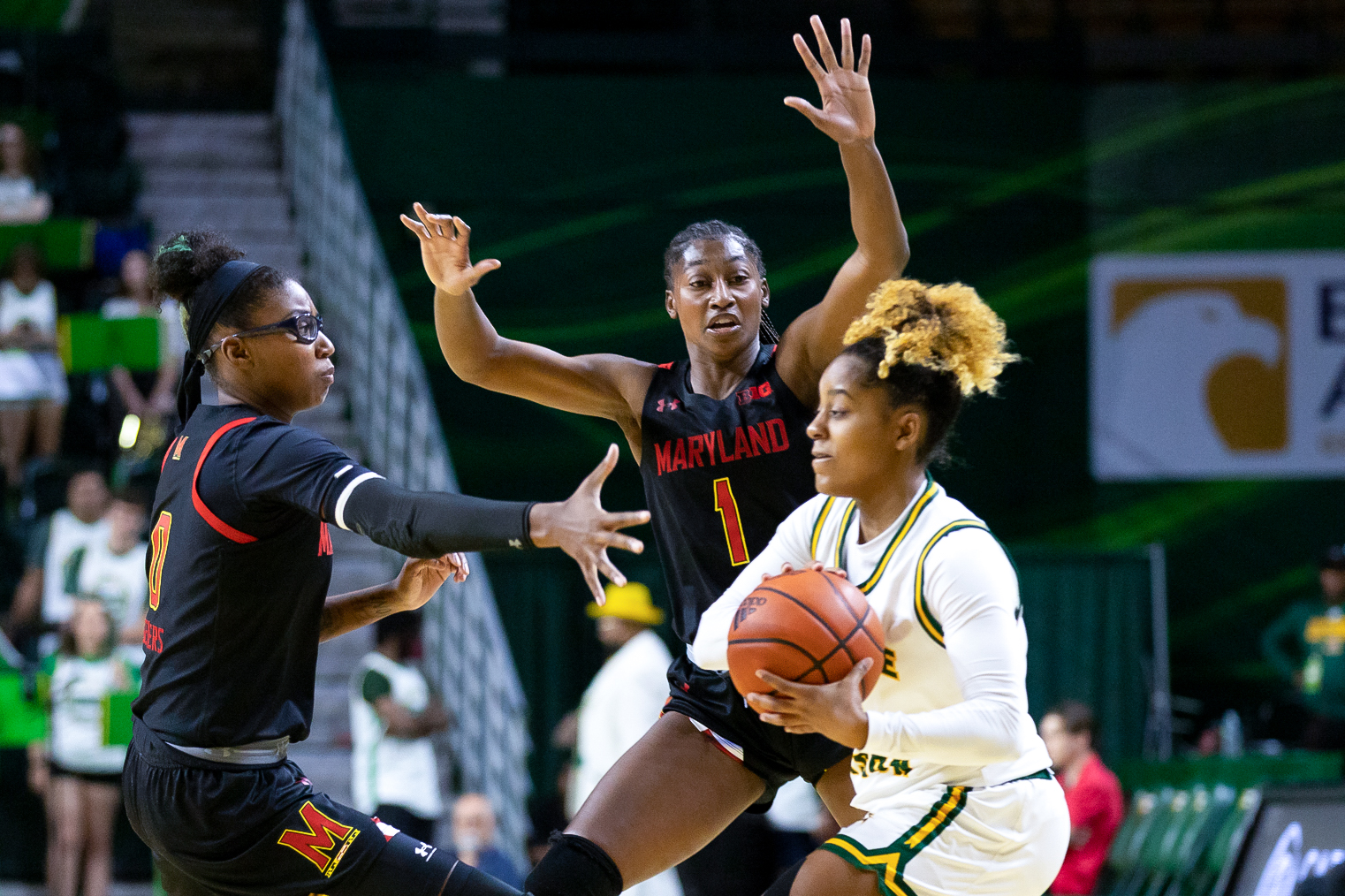 A win is a win, and sometimes that’s enough.

At least that’s how Maryland women’s basketball coach Brenda Frese felt after her team eked out a seven-point win Sunday over a veteran-laden Fordham team.

“Sometimes you got to have an ugly win,” Frese said. “And we were able to keep our poise and our composure in that fourth quarter. But I think overall, we know we can play better and a lot of lessons we can learn.”

The Terps had a 10-point lead after the first quarter but let Fordham back in the game after getting outscored by nine in the second. Maryland also gave up 17 offensive rebounds and converted just four of its 11 attempts from 3-point range.

After a 25-point loss to No. 1 South Carolina on Friday and an unconvincing victory against Fordham, Maryland dropped two spots in the national ranking to 19th.

But while the Terps were knocked down a couple pegs in the national standings, Fordham is a capable squad; the Rams’ started three graduate students and two seniors, with Anna DeWolfe, Kaitlyn Downey and Asiah Dingle combining for 57 of the team’s 76 points as well as 15 rebounds and 11 assists.

“Definitely concerned going into this game just with their experience in that starting lineup,” Frese said. “Three of those kids are grad seniors — an entire starting five of seniors.”

Anticipating a competitive game against an experienced team, Maryland focused on moving the ball and prioritizing open shots. The Terps had 18 assists, a third of which came from graduate guard Elisa Pinzan, and made about 50 percent of their shots from the field.

“I think we also learned that playing against a team like that, we wanted to put an emphasis on sharing the ball, and we made it work,” senior forward Brinae Alexander said.

Sunday was Maryland’s second of three games against a member of the Atlantic 10 conference — it plays Davidson on Wednesday in the annual Field Trip Day Game and defeated George Mason by 37 points in its season opener.

“They tend to be really competitive, top to bottom,” Frese said of the A10. “So those types of mid-major teams are going to prepare you; you’re not just going out and getting a 50-point blowout that oftentimes doesn’t teach you a lot.”

One of the bright spots from the mid-day contest was the return and strong play of senior guard Diamond Miller, who missed the South Carolina bout with a knee injury.

Miller logged her first double-double of the year and grabbed a career-high 13 rebounds. Her 34 minutes and 22 points (13 from the free-throw line) also led all Maryland scorers.

Despite her rebounding acumen, she struggled from the field  — connecting on just 33 percent of her field goals and committing eight turnovers.

“I’ve got lots to work on — a lot of turnovers and stuff like that,” Miller said. “But overall, I think my teammates helped me and pushed me through. We all did come together to get the win. That’s all that matters.”

Despite winning a closer-than-expected match with Fordham, Miller’s health, along with a 15-point game for sophomore guard Shyanne Sellers and a 14-point outing for Brinae Alexander, is an encouraging sign for a Maryland team with one of the nation’s most arduous schedules.

There are six teams currently ranked higher than the Terps that they will face this season, with an additional two also ranked in the top-25.

The Terps will need their senior leader in every one of those games.

“It’s fun,” Miller said of her return to the court following an absence. “Healthiness is the motto for this season for me and for all my teammates. So to finish the game feels like a lot of fun, just happy to play.”