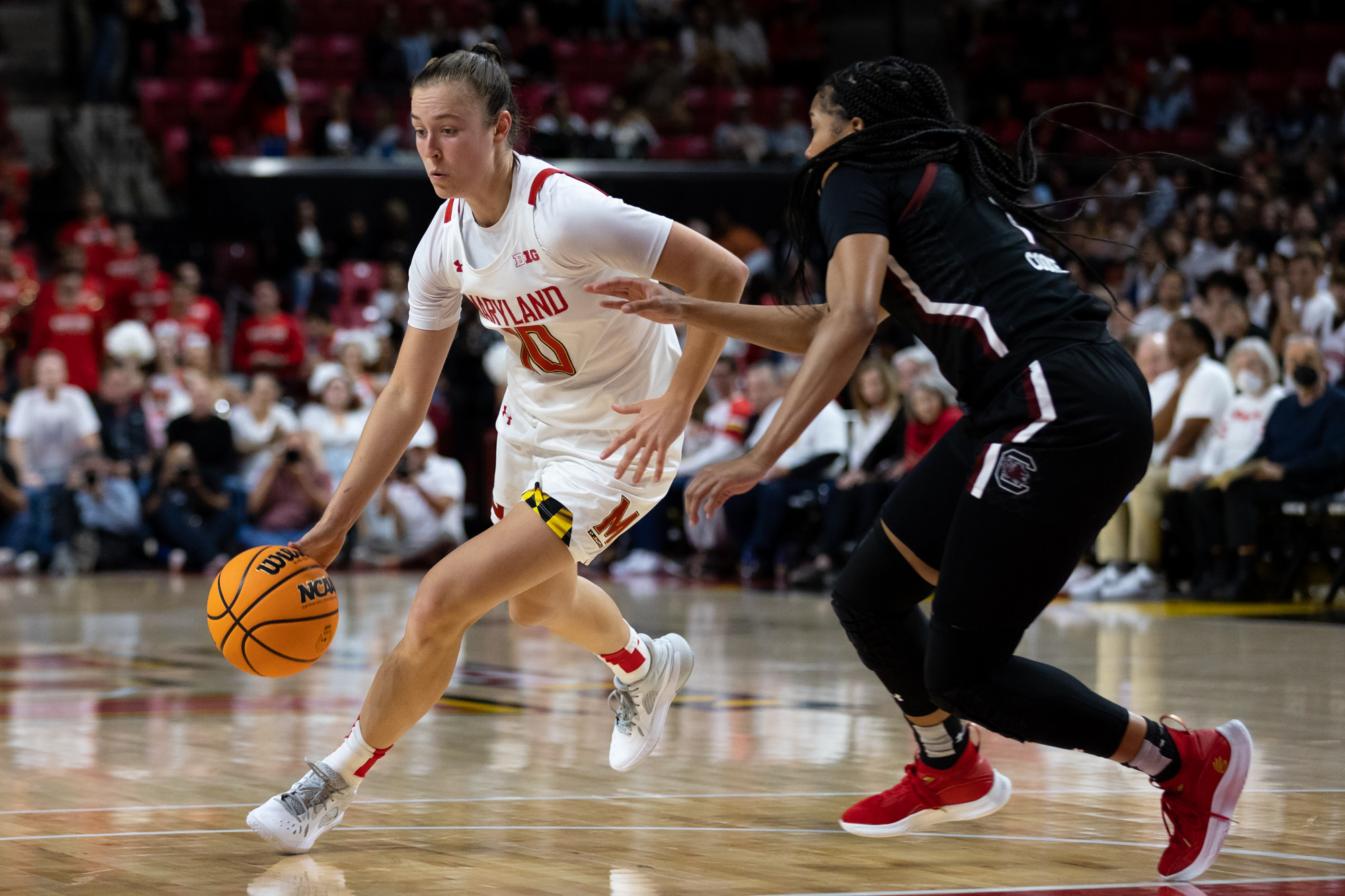 With all of Bethesda, Maryland, packed into the Xfinity Center Friday night, senior guard Abby Meyers did everything she could to will her side to victory. The Princeton transfer scored 14 of Maryland women’s basketball’s first 17 points, combining a mix of dribble-drives with early threes to keep the Terps within six at the half.

At one point, after Meyers hit a fadeaway two, defender Zia Cooke threw her hands up in exasperation. Little No. 1 South Carolina threw at Meyers in the first half slowed the Maryland native, but the Gamecocks adjusted in the second.

After putting up 16 points on 7-for-15 shooting in the first half, Meyers scored only five in the second on 25% shooting from the field. She logged a game-high 38 minutes but didn’t get enough support from the Terps’ depth, a unit that failed to score efficiently in Maryland’s 81-56 loss.

[Without Diamond Miller, No. 17 Maryland women’s basketball loses 81-56 to No. 1 South Carolina]

After pacing Maryland on Monday with 19 points against George Mason, Meyers again led on offense with a team-high 21 against the Gamecocks. But she was the only player for coach Brenda Frese’s squad to score in double digits; sophomore guard Shyanne Sellers had nine in 23 minutes before fouling out and suffering an injury in the process.

The two combined for over half the team’s total points and tallied 11 rebounds on 13-for-33 shooting. The rest of the team shot a collective 7-for-33 from the field and 3-for-11 from three.

“We got a number of experienced players that can come in and give them different looks, and I thought we used our size and our length to our advantage tonight,” South Carolina coach Dawn Staley said.

Staley, who wore a ‘Phree BG’ number 42 t-shirt and an orange ‘WE ARE BG’ pin during the game to continue to bring attention to Brittney Griner’s imprisonment in Russia, showcased her deep rotation by calling on 12 different players.

“We have a lot of depth,” Aliyah Boston said. “They do what they need, they understand the flow of the game and what they need to do.”

The Terps hung with the defending national champions through the first half but gave up 30 points in the third quarter and went over four minutes without a field goal. The frame allowed South Carolina to balloon its lead to 16 on an evening where it never trailed.

“You just saw the third quarter got away from us, obviously because of the depth that they had, the size, the experience,” Frese said.

Frese’s side fell in its home opener by 25, but did so against the No. 1 team in the country — a difficult proposition made harder to due Diamond Miller’s absence. The senior guard missed the match after participating sparingly in practice due to a knee injury sustained on Monday against George Mason.

Through the game, the coach noticed one thing about her team that gave her cause for optimism despite the poor offensive performance.

“This group didn’t flinch, and they didn’t hang their heads,” Frese said. “They didn’t feel sorry for themselves.”