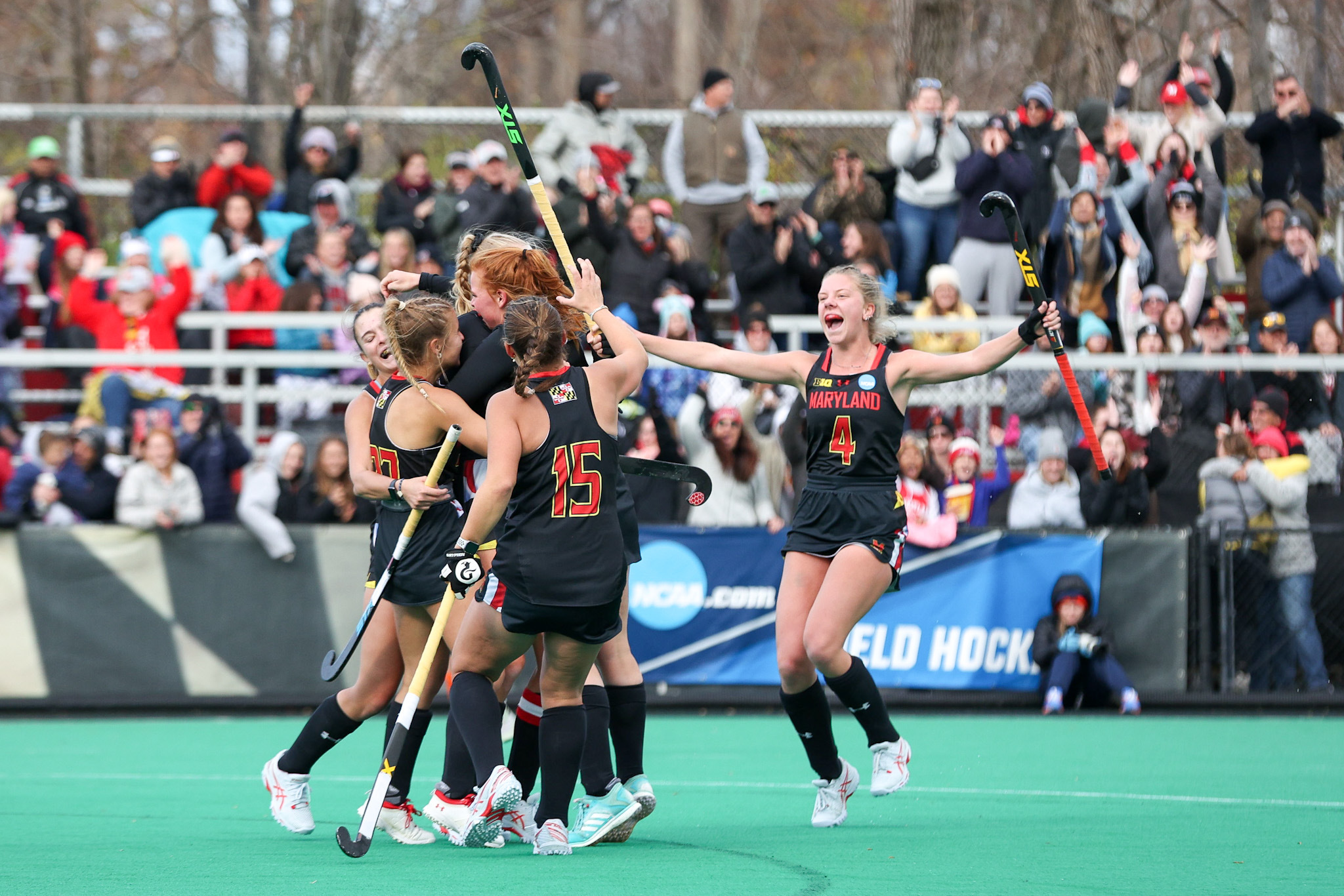 Paige Kieft has been Missy Meharg’s go-to goalie for shootout situations all season. The coach particularly likes how the sophomore defends drag flicking, a key component of scoring on a shootout.

For the first time all year, Kieft’s specific skills were called upon. She’d been used for penalty strokes a few times, but never a shootout.

The sophomore entered off the bench, relieving starter Christina Calandra to keep Maryland’s season alive in the NCAA quarterfinal. She let the first two Syracuse shots go through and with no goals on their first attempts, the Terps found themselves in a 2-0 hole with three more to go in the best of five competition.

Maryland’s season was largely up to Kieft, who needed to stop the next three Orange shots. Her mind went completely clear, which allowed herself to move past the first two shortcomings.

She stopped the next four Syracuse tries, including its first in the sudden death period, while the Terps equalized and eventually put another shot through to lead No. 2 Maryland field hockey to a 3-2 shootout victory over Syracuse Sunday and send it to its second consecutive Final Four.

“I’ve watched Paige well enough to know she’s a student of the game,” Meharg said. “She’s not going to make that mistake twice. I wasn’t concerned, it was just our job to make sure we put ours in.”

Hope Rose and Bibi Donraadt gave the Terps their two scores. They were the third and fourth shooters respectively who came after Leah Crouse and Riley Donnelly misses.

“Going to shootouts, we’ve just done it yesterday actually in training,” Meharg said. “The same order of people. We were ready to go and prepared. … We simulated it pretty much exactly.”

The even score after five attempts each produced a sudden death period, where teams alternate shots and the game ends on a made goal after both sides get a chance. Rose took Maryland’s first and scored easily after dancing around Syracuse goalie Brooke Borzymowski to create an open look.

Kieft shut down the ensuing attempt by the visiting team, making the game-winning save and leading to a celebratory dogpile over the goalie.

The two shootout periods followed a pair of scoreless overtime periods. It was the Terps’ second straight postseason contest that needed at least double overtime.

Regulation was marred by missed opportunities for Maryland. It took 17 shots and 11 penalty corners in the first four quarters and failed to score on any of them.

“One of the things we said was ‘just make the goalie play the ball’ because she really hasn’t had a great year,” Meharg said. “Of course we made her play and we shot at her pads all day.”

The Terps’ attack kept the Syracuse goaltender on her toes throughout the first quarter. It took seven shots, five of them on goal, all in a five minute stretch to keep Borzymowski active.

Calandra wasn’t tested nearly as much. The Orange didn’t fire their first shot at her until over 17 minutes into the contest. But despite failing to tally a shot until the second quarter, Syracuse scored the game’s first goal.

An out of position Terps defense that was focused on a fast Orange push upfield allowed the visitors an open look at Calandra and the net. The goaltender moved up to deflect an initial shot, leaving an unattended goal cage behind.

That allowed a weak tap-in shot to dribble over the line, forcing Maryland to start in a deficit in its second straight NCAA tournament game.

The home team’s poor scoring luck carried into the second half, where the Terps were awarded four corners in the first minute and 32 seconds out of the break. None of them went in as Borzymowski employed a variety of diving stops and glove-jabbing deflections to keep the Maryland scoresheet blank. All 10 of its first shots on goal were saved.

Emma DeBerdine was first to break through Borzymowski’s wall, scoring on the Terps’ ninth corner of the quarterfinal 49 seconds into the fourth quarter. Freshman Sophie Klautz, playing in her first postseason, put Maryland up for the first time all game.

Her efforts were quickly erased as Syracuse scored less than a minute later, sending the game into extra time and a shootout that was capped off by Kieft sending the Terps to the Final Four.

“You come into Maryland knowing that you’re part of a legacy,” the sophomore goalkeeper said. “But it’s another thing going to two Final Fours. You don’t get used to that feeling, it’s fresh every single time. You feel a part of something special and something greater.”