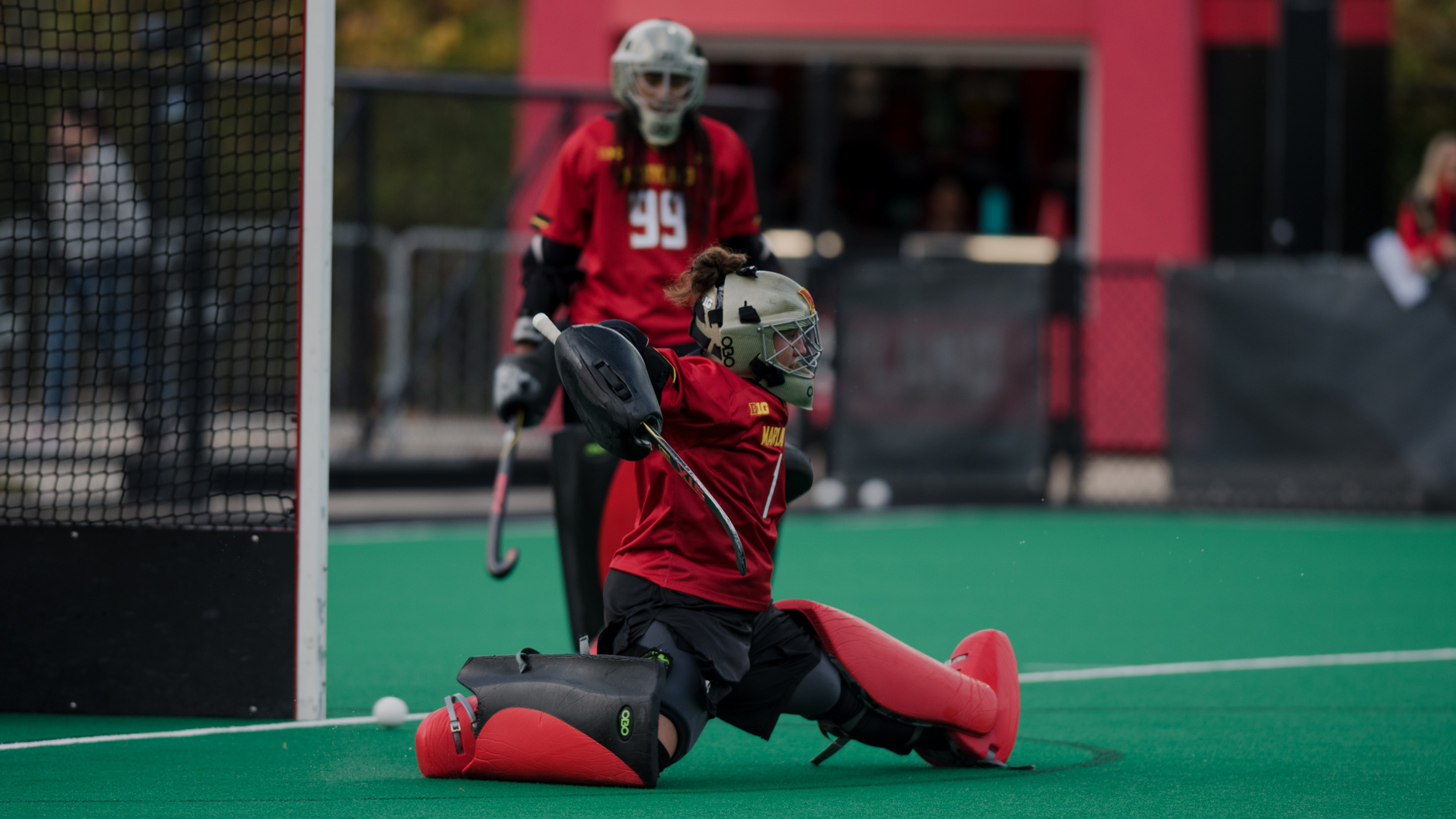 Noelle Frost didn’t know she wanted to be a field hockey coach until she became one.

Frost coached with Freedom HKY, a club team for children, early in her playing career with Maryland field hockey. She was jokingly told earlier that she’d one day coach field hockey by parents of the youth players she volunteered with while in high school.

Now she stands beside Missy Meharg on the sidelines in College Park after being a goalie for the Terps from 2017 to 2021, working as an assistant who specializes in goaltending for the No. 3 overall seed in the upcoming NCAA tournament.

Freedom HKY gave her an opportunity to earn money while she wasn’t playing for the Terps or in school, where she at first had no plans following graduation.

Coaching developed into a passion almost immediately. The role gave Frost an avenue to give back to the sport she played her entire life and opened her eyes to the possibility of a career after Maryland.

“I started enjoying it so much more than I anticipated,” she said. “I would just go to work and have the time of my life. That’s when I realized that I wanted to do this professionally.”

Being a coach gave Frost an ability to positively impact young people’s lives. Parents of Freedom HKY players frequently approached her to share the impact she was making on their children, giving her an understanding of the potential influence a coach can have on their players.

“If you can teach something to anywhere between a nine and an 18-year-old … it helps you rethink how you talk to people and how you coach,” Frost said.

The fulfillment she felt when coaching, despite the unfavorable, long hours the club level requires, pushed her to speak with Meharg about joining her staff with the Terps after graduating.

Maryland’s coach of 35 seasons has become known for developing former players and assistants into head coaches at other programs. Several of Maryland’s opponents this season are led by a former Terp who either coached or played for Meharg.

A similar career arc could be in store for Frost, Meharg believes.

Frost was aware of her former coach’s keen ability to extract the most out of both her players and staff. Her name is renowned in the field hockey world, which became a deciding factor in Frost wanting to be her understudy.

“Everyone in [field] hockey, if you say Missy Meharg, they immediately know she’s hands down one of the best hockey coaches ever,” Frost said.

“You definitely earn a bit more respect because you got a chance to learn from her … When she suggested that position … I don’t even think I thought twice.”

The job was offered after the conclusion of the 2021 season, Frost’s fifth with the Terps. She amassed 229 saves and logged a 0.746 save percentage in 69 career games and contributed to a Big Ten tournament title and a run to the national championship game in 2018.

Frost now works at the Gossett Student Athlete Center as an office manager in conjunction with her coaching role with field hockey. She also spends her Mondays at Johns Hopkins working with the Blue Jays’ goaltenders once a week.

Her departure from the field following the 2021 season left a void at the Terps’ goalie position that she’s now being asked to help fill in a different way. The full time starter for three seasons never dealt with controversy over who would be in net, but the team has divided time almost equally between Christina Calandra and Paige Kieft this season.

Calandra, a senior who backed up Frost for two years, opened the season as the starter before losing the job to Kieft five games in. The sophomore then held the role for 11 games and returned it after surrendering four goals in the first half against Penn State.

Calandra’s been the starter since, allowing just five goals in four full games including a shutout of No. 5 Virginia in the penultimate regular season game. She figures to be the starter for the rest of Maryland’s postseason barring a collapse.

The back-and-forth strategy hasn’t impacted Calandra and Kieft’s personal relationship. Their friendship remains intact, a feat that can largely be credited to Frost and a program tradition the new coach has worked to maintain.

Maryland goalies have long formed tight-knit relationships stretching beyond Frost’s career. She experienced it first hand as a player and wanted to continue it as a coach.

Calandra and Kieft have adjusted to splitting playing time and attacked the situation with a mindset instilled in them by Frost, focusing on what they can control and not allowing what they can’t to wear them down while being a part of a strong culture.

“She knows this program better than anyone,” Kieft said. “She’s been a huge help both on and off the field.”

“She knows the game, she knows what it’s like to be playing, she knows what we need to be prepared for all the games,” Calandra said. “It’s been awesome just working alongside her and having her push us for every game.”

It’s been nearly a decade since Frost laughed off suggestions that she’d blossom into a full-time coach. She’s now doing what she recently fell in love with in a new role for the program she won dozens of games with as a player.

“I get to share my sport with the next generation but also help shape people,” Frost said. “It’s really rewarding. It makes me just feel like I’m doing something purposeful.”