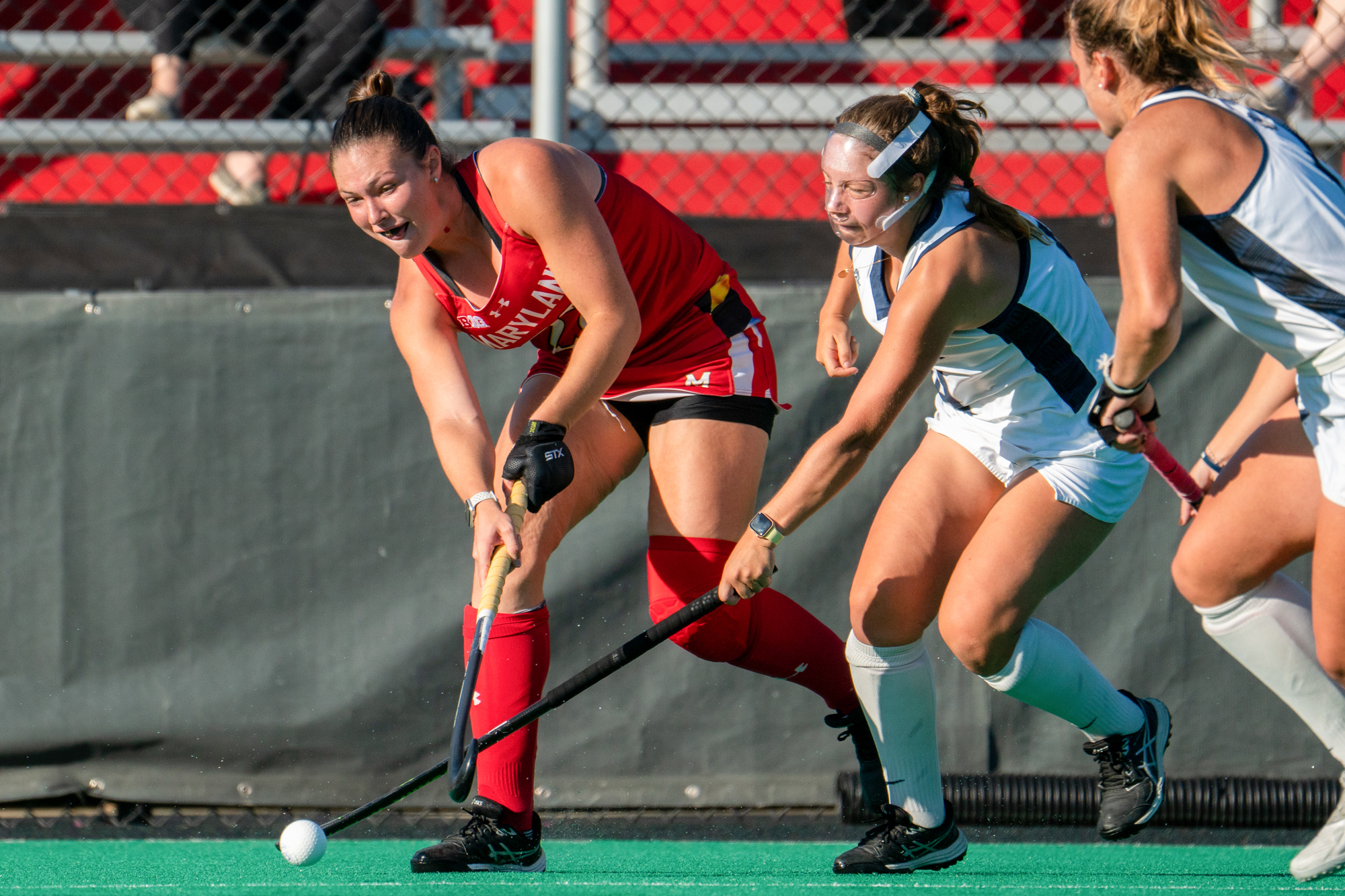 Maryland field hockey’s players erupted in celebration when they saw they’d be taking on Liberty in the opening round of the NCAA tournament.

The Flames eliminated the Terps in last year’s semifinal with a double-overtime 2-1 defeat, preventing Maryland from reaching its second national championship in four seasons.

This year’s Terps were eager to get a chance to avenge that loss. That motivation translated into a fierce intensity throughout the contest that even the heavy College Park rain couldn’t damper.

The two sides needed two overtime periods once again to decide a victor following a closely contested 70 minutes that ended with a 1-1 deadlock. Last year’s battle in the semifinals entered double overtime in a 2-2 tie before Liberty scored to move on.

Danielle van Rootselaar sprinted downfield with just one defender to beat in the opening minutes of the second overtime period. Her initial shot was illegally blocked, giving Maryland its second penalty stroke opportunity of the game.

Riley Donnelly was chosen to take the potential game-winner. She shot to her right, going past an outstretched and diving Liberty goaltender Azul Iritxity Irigoyen to put Maryland on top and send it to the NCAA quarterfinals with a 2-1 win Friday.

“You just gotta find a will,” Missy Meharg said. “You gotta impose your will and you gotta finish when it matters.”

The Flames rank fourth in the nation with 3.37 goals per game this season. Maryland held them to just one, largely due to an offense that seldom gave up the ball.

The Terps’ offensive attack’s potency was on display early. The unit outshot the opposition 7-1 in the opening 30 minutes of play, but entered halftime in a scoreless tie despite that.

By game’s end, the home squad totalled 23 shots to the away team’s six.

Iritxity Irigoyen stunted every Maryland chance at the goal cage in the first half with four stops. She added five second-half saves and three more in overtime for a total of 12 on the day.

The Terps’ defense entered the intermission rested. It was rarely tested as it held the Flames to zero shots on goal in the first half, but finally fell five minutes into the third quarter.

Liberty’s Jodie Conolly took advantage of her team’s second penalty corner of the game, sneaking a shot past Christina Calandra. It was the Flames’ first shot on goal of the game nearly 35 minutes in.

A Maryland offense that was outplaying Liberty’s was suddenly in a deficit despite far outnumbering their shot totals and quality chances.

Margot Lawn finally got the Terps on the board on their first look at an equalizer following the Flames’ strike. She collected a rebound off an Iritxity Irigoyen deflection and fired a missile past her for a goal off the boards, creating a thud that was louder than the subsequent frenzy of celebration.

“These are the moments when you get the highest highs and the lowest lows,” Donnelly said.

The building intensity that grew as the game went on reached a climax in the fourth quarter. The period became highlighted by both team’s vicious backfields with each side forcing a handful of turnovers via an aggressive style of play.

That strategy almost became costly for Liberty when Maryland earned a penalty stroke attempt late in the fourth quarter after a Terp was tripped in the circle. Hope Rose took the try, a role she’s held all season and scored numerous goals off of.

Iritxity Irigoyen dove to her right, blocking Rose’s potential lead-changing goal and the Terps’ best chance at a game winner in regulation to send the win-or-go-home contest to overtime.

Maryland had won four of its five games that needed extra time this season. It’s a situation they’ve trained for extensively in practices all season long.

“You don’t have a set idea of lineups,” Meharg said. “It’s kinda fun with the coaching staff because we have a quick little five minutes to banter on who’s where and how do we do this. It’s about matchups. You go off of what you’ve seen the other team. … The more you practice something, the better you get at it.”

After neither side broke the deadlock in the first overtime period, the Terps found the breakthrough in the second.

Van Rootselaar, pushing the circle with minimal opposition, took a shot that produced Maryland’s second penalty stroke chance after it failed to take advantage of the first.

Just as the team was elated as they watched the selection show and discovered who’d they be playing, a similar feeling swept over Meharg’s squad as they rushed the field to join and celebrate with Donnelly, whose score allowed Maryland to overcome last year’s season-ending defeat.

“Most of us were in that game,” Donnelly said. “But also this year, we’re a new team. Of course we’re looking for revenge. … That’s what postseason is all about.”