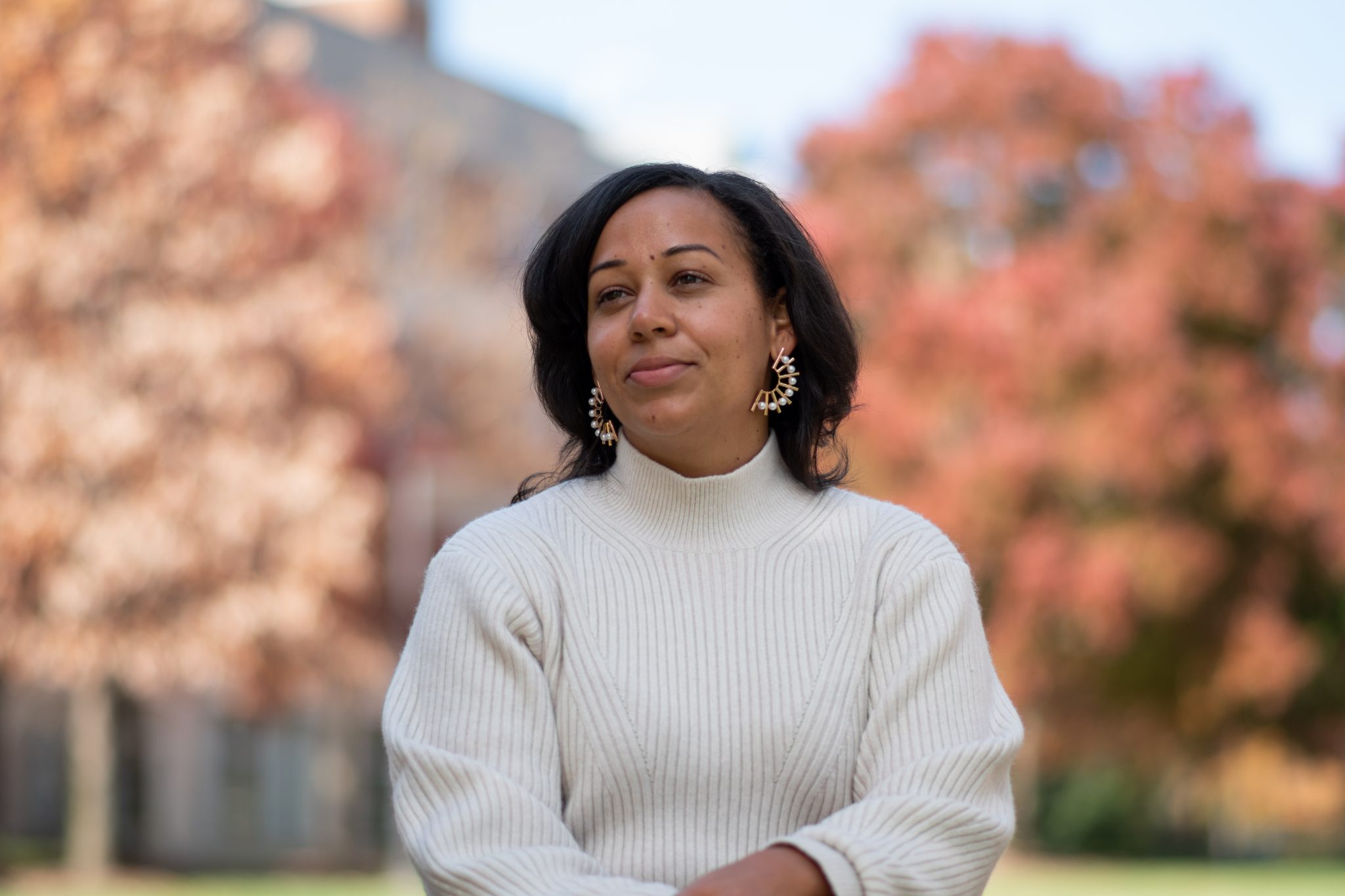 Jeanette Snider, an assistant research professor in the sociology department at the University of Maryland, poses for a portrait outside of Van Munching Hall on Nov. 4, 2022. (Autumn Hengen/The Diamondback)

It wasn’t until admitted students weekend that Jeanette Snider knew she wanted to attend the University of Maryland for graduate school.

Snider, now an assistant research professor in the sociology department who earned her master’s and doctorate degrees from this university, was drawn to the higher education administration program before that weekend. But after meeting Sharon Fries-Britt, a professor in the education college, her mind was made up.

“She is a Black woman. She’s absolutely extraordinary. Her research is amazing,” she said of Fries-Britt. “And when I met her … I was like, This is it. This is where I want to go, to be taught by someone of her caliber, to see someone who looks like me, at the front of the classroom who was just absolutely inspirational.”

The university recently ranked first among non-historically Black colleges and universities for the number of Black alumni who go on to earn doctorate degrees, according to a report from the National Center for Science and Engineering Statistics. Many Black graduates of this university who went on to receive doctorates, such as Snider, have credited the communities they built with other faculty, students and researchers for the success they found continuing their education.

One of the biggest contributing factors to Snider’s success at this university was her close-knit friend group, which was comprised of other Black and Latinx women. They met during the first year of her program and more women joined their group as new cohorts of students entered the program.

“We worked together on weekends in coffee shops. We were writing for years together, and we’re still very much connected,” she said. “Even though many of us have graduated and moved, are faculty in different places, high-level administrators all over the country, we still stay very connected to each other.”

University President Darryll Pines said the honor of having so many Black alumni earn doctorate degrees is a testament to this university staying true to its core values of diversity, equity and inclusion.

On his first day as president, Pines said he wanted “to create an inclusive, multicultural community where everyone can reach their full potential.” This statement reins true today as this university has “almost tripled down on that commitment,” Pines said.

But Black students looking to find success at this university have not always had an easy time forming connections.

Joey Jennings, now a doctoral student in the sociology department, found it difficult to transition to this university when he first entered as a graduate student. Prior to his education at this university, he attended Winthrop University in South Carolina – and had a difficult adjustment to this university because of the differences in the Black student population between the two schools.

At this university, Jennings had to work to find other Black students who made him feel comfortable and made him feel safe. During his undergraduate studies, he was surrounded by a larger population of Black students, and did not have to approach community building with the same intentionality, he said.

During the first few years of his academic career at this university, Jennings found a cohort of Black students who made him feel “safe and feel seen” in a predominantly white university environment that is typically not as safe for marginalized communities, he said.

He said the university and the sociology department didn’t create an environment for students of minority communities. The students were responsible for creating that environment themselves, he said.

Although there was only one other Black graduate student in the government and politics program when William Bishop began his degree, he noticed his department becoming more diverse and working to build a strong community.

Bishop received his master’s degree from this university in 2020 and is working toward his doctorate in American politics. Attending a research program at this university the summer before his senior year of undergraduate school was a “great experience” because it showed him how he could build a community with other students and faculty.

He also found comfort in knowing this university’s wider community of Prince George’s County is far more diverse than his hometown in Michigan.

“Prince George’s County is a majority Black county with a lot of Black professionals,” he said. “I felt like Maryland was a place that was invested in their students, and I felt like they were invested in me and truly wanted me to graduate, not just kind of show up and be a number.”