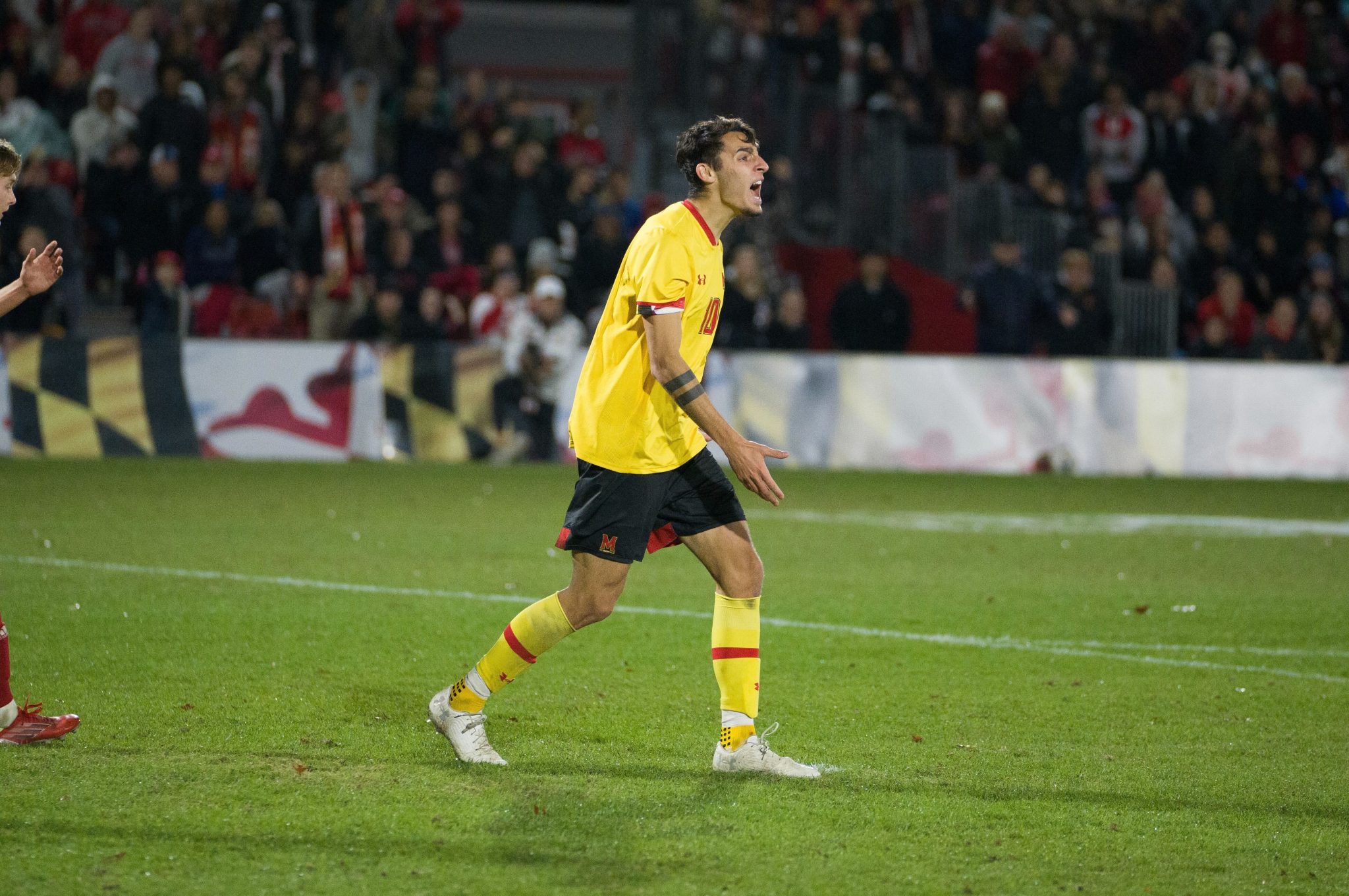 Chris Rindov and Stefan Copetti both leapt up for headers late in the match, chances that could’ve been equalizers for Maryland.

But both efforts hit the crossbar and were subsequently cleared away. The 10-man Terps came close, but couldn’t muster a late comeback effort to overcome a first-half deficit.

No. 6 Maryland men’s soccer’s chances came too late as it fell to Indiana in the Big Ten tournament semifinal, 2-1.

“We gave a good team too many chances … and they capitalized on some quality chances and that can’t happen moving forward,” Malcolm Johnston said.

The matchup was the Terps’ fifth postseason contest against the Hoosiers in the last five years. Maryland advanced just once in the previous four matchups and was outmatched by Indiana once again Wednesday.

The Hoosiers advance to their sixth consecutive Big Ten tournament final, while the Terps will wait for their name to be called in the NCAA tournament selection show Monday.

Coach Sasho Cirovski handed Colin Griffith his first start since Sept. 16 against Michigan after the forward slotted the game-winning strike in the Terps’ quarterfinal win over Northwestern.

Stefan Copetti notched the first shot of the match. He shifted to the right wing to make way for Griffith at striker.

Copetti flashed another shot past the near post but the Terps stumbled early on and didn’t generate a single shot on target in the opening 45 minutes.

Griffith changed that in the 61st minute, scoring in his second straight match. He tucked a curling shot past Indiana goalkeeper JT Harms and into the bottom left corner to cut the deficit to one.

“The last two or three games [Griffith’s] been very good,” Cirovski said. “That’s why he’s getting the minutes he’s getting, because he’s competing hard, he’s holding the ball, obviously scored a nice goal today and he was a menace throughout.”

Indiana punished the home squad by scoring the opening goal just as it did in its final regular season match against the Terps.

The tally came after a William Kulvik giveaway in midfield. The Hoosiers quickly moved the ball forward as Samuel Sarver placed a Ryan Wittenbrink cross into an open net in the 35th minute.

The Hoosiers took their 2-0 lead into halftime, finishing with four shots on target that all came in the last 11 minutes of play.

The Terps came inches away from equalizing four minutes after Griffith’s goal when Rindov’s header bounced off the bottom of the crossbar. But the referee confirmed the ball didn’t cross the line after video review, keeping Maryland from tying the game.

Cirovski’s squad remained on the front foot for the rest of the second half, preventing the Hoosiers from registering a single shot in the second half.“We did everything better [in the] second half, we defended better, we attacked better, we held the ball better,” the coach said. “When you hold a team to no shots you’re doing a lot of really good things. If we did that in the first half, we’d have a better outcome.”

Griffin Dillon picked up Maryland’s first red card of the season as it chased Indiana’s lead in the 75th minute.

“I contemplated taking him out when he had that one yellow card but we needed him in there,” Cirovski said of Dillon. “We took a risk and the risk didn’t pay off, so unfortunately now he’s got to sit in the first game of the NCAA tournament. That’s gotta be a learning moment for him to be a little bit smarter with that.”

Despite losing a man to the ejection, the Terps still generated potential game-tying chances.

Colin Griffith’s blocked shot fell to Joshua Bolma in the 79th minute, who lofted a cross to the back post. Copetti met the ball with his head, but his shot caromed off the crossbar and away from goal — taking with it Maryland’s chances at advancing.