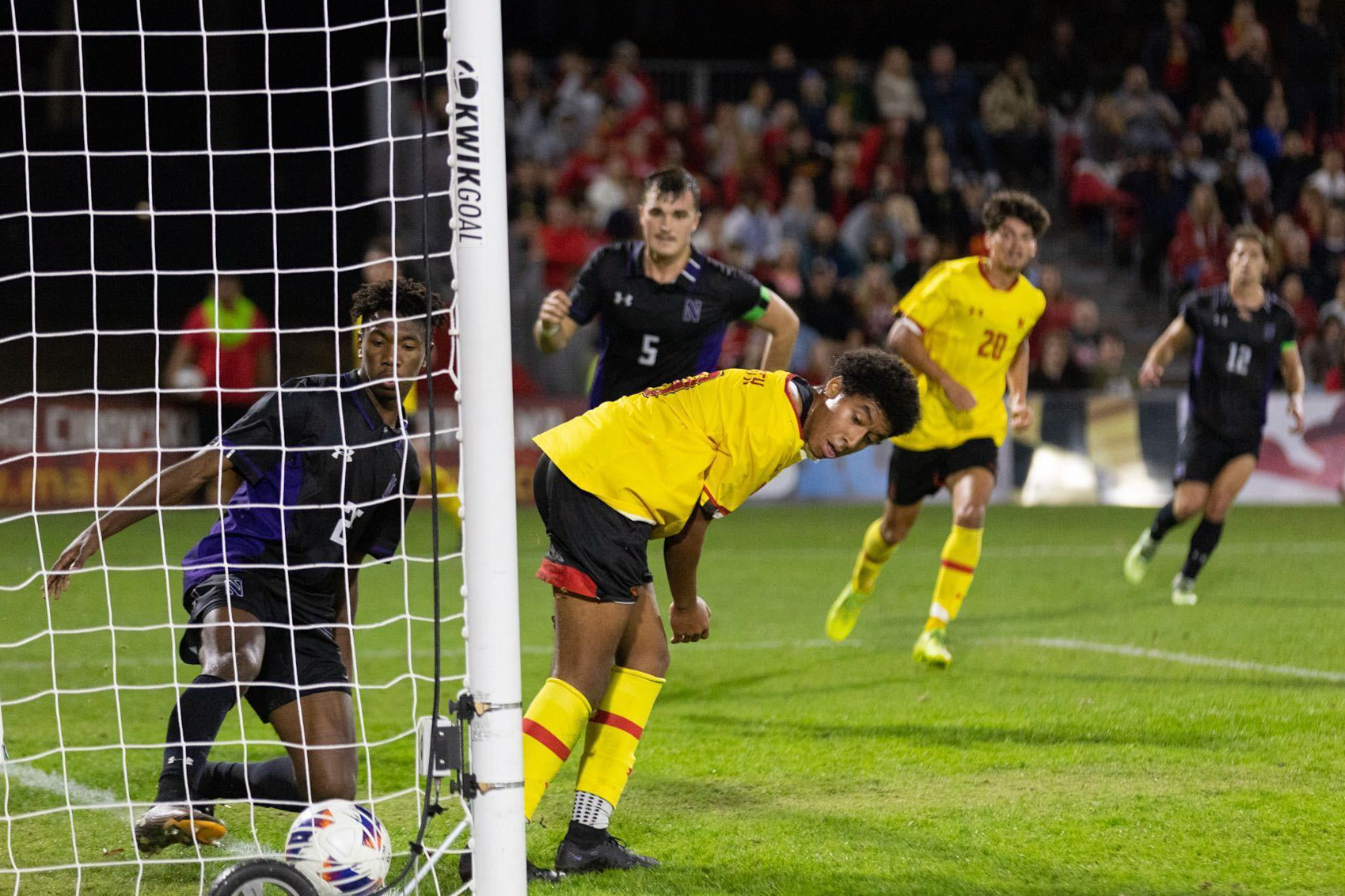 Malcolm Johnston and Joshua Bolma both stepped up to the penalty spot with opportunities to give No. 7 Maryland men’s soccer the lead.

The Terps had slotted every spot kick so far this season but failed to score on both chances. Friday marked the first time Maryland missed two penalty kicks in the same match since Oct. 6, 2017 against Ohio State.

But Colin Griffith’s late tally from a Malcolm Johnston cross was enough to push the top-seeded Terps past No. 8-seed Northwestern in the conference tournament quarterfinal, 1-0.

“We always believe we’re gonna get a goal,” Griffith said. “Two penalties missed, that rarely ever happens but we bounced back, we always believed and we just kept shooting.”

Maryland will take on Indiana in the Big Ten semifinals at Ludwig Field on Wednesday. The Terps claimed the conference regular season title with a late 1-1 draw against the Hoosiers on Oct. 30.

Northwestern crafted a well-worked counterattack early on as Joseph Arena played through Bardia Kimiavi, who curled a shot toward the back post. Niklas Neumann matched the strike, one of the three saves he made on the Wildcats’ opening three shots.

Early pressure let the visitors gain possession and create chances, Nick Richardson said. But the Terps found opportunities of their own in the middle of the first half.

Coach Sasho Cirovski’s squad couldn’t break the deadlock despite coming inches away from scoring twice toward the end of the opening 45 minutes.

Maryland didn’t notch its first shot of the half until a Stefan Copetti header sailed over the net in the 24th minute but earned a penalty kick seven minutes later after Bolma was brought down in the penalty box.

Johnston stepped up to the spot having scored his first four attempts of the season, but couldn’t put away his fifth.

The miss echoed the Terps’ conference tournament quarterfinal loss to the Wildcats last season when Jacen Russell-Rowe missed an attempt in regulation before Maryland fell in penalty kicks.

Joshua Bolma had a similar opportunity to slot home the opening goal from the penalty spot in the 62nd minute but sent a weak shot down the middle that was easily saved by Northwestern goalkeeper Christian Garner.

Missed opportunities nearly doomed the Terps, William Kulvik almost gave his squad the lead at the end of the first half, but his header was cleared off the line by Northwestern defender Nigel Prince.

Chances like Kulvik’s and the two misses from the spot prevented coach Sasho Cirovski’s squad from breaking the deadlock for most of the game.

“Unfortunately it’s a game where if we score at least one of the penalties and get a couple of other goals that the keeper somehow miraculously kept out … we played well enough to win this game by several goals,” Cirovski said.

Joe Suchecki started the match as Maryland’s attacking midfielder, but the Terps shifted Bolma to the center of the pitch at the beginning of the second half.

The redshirt sophomore made an immediate impact and nearly broke the scoreless tie, putting a low cross from Johnston just past the near post.

The Terps sustained their pressure throughout the second half, totaling 10 shots in the final 45 minutes to Northwestern’s zero.

“We upped our pressure as the game went on,” Richardson said. “It’s very difficult to play for 90 minutes in the way that they came out with the high press and all over our midfield. But credit to us, we kind of built into the game and became better on the ball and better in possession.”

Albi Ndrenika almost scored the first goal of his collegiate career as Gardner struggled to keep his header out in the 71st minute, but the Terps were denied by another one of his six total saves on the night.

Maryland finally broke through in the 76th minute with Griffith’s goal, the freshman’s first since the season-opener.

“When I came in I made sure to bring the energy, bring the threat to goal, cause some problems,” Griffith said. “That’s what coach wanted and that’s what I brought.”

The Terps’ defense held the Wildcats without a second-half shot as Cirovski’s squad overcame the two premier scoring chances to avoid an opening-round defeat to the Wildcats for the second straight year.