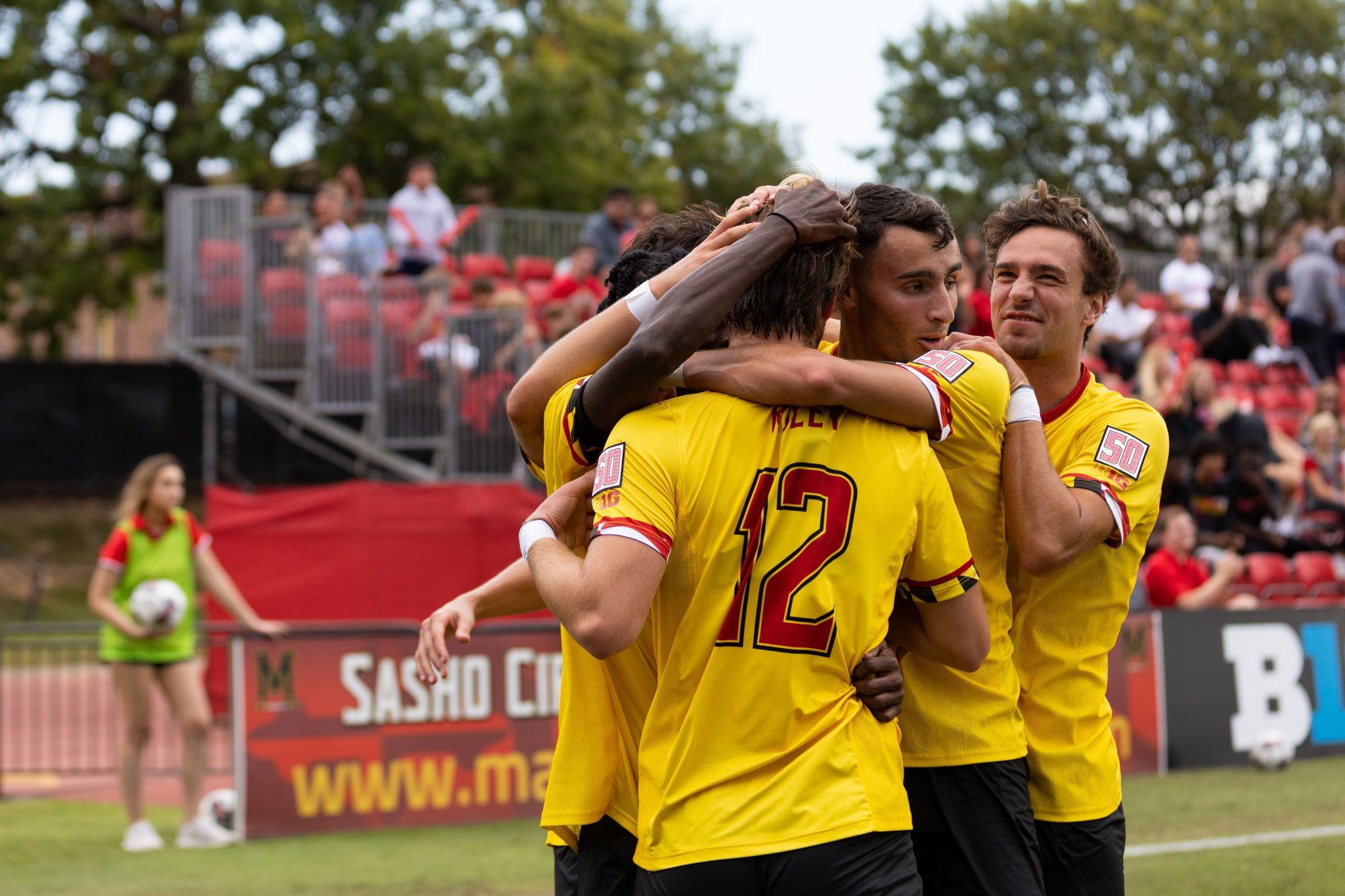 Joshua Bolma launched a curling cross into a crowded penalty box with just three minutes remaining and found one of them.

Stefan Copetti rose above his defender and powered a header past Hoosiers goalkeeper JT Harms with just over three minutes to go before his teammates dove on him in celebration.

His goal helped No. 8 Maryland men’s soccer overcome an early deficit to draw Indiana and claim its first Big Ten regular season title since 2016 Sunday with a 1-1 tie.

“I’m incredibly happy for our players, for the toughness and resilience that they showed in finding a way to score that great goal at the end that gave us the Big Ten title,” coach Sasho Cirovski said. “This is a team that’s [had] great character, been really fun to coach. They are just made of the right stuff.”

Ohio State could’ve won the conference championship with a victory, but the Buckeyes’ 3-2 loss to Wisconsin on the final day meant a tie was enough for the Terps to secure the trophy for themselves.

“I had heard before I went and subbed back in the second half that Wisconsin was up 3-2,” Copetti said. “In my mind I thought Wisconsin was gonna hold on and that a tie was enough. So, as soon as that ball went in the net there [were] so many emotions going on in my head. I was so happy and couldn’t be happier for the rest of the guys too.”

Cirovski’s squad will host every game of their conference tournament run after earning the No. 1 seed and will host No. 8-seed Northwestern in the quarterfinal.

Indiana started the match on the front foot, but Maryland created its first chance in the 11th minute as Luca Costabile cut a pass back just behind Hunter George, who launched a shot over the crossbar.

The Terps committed multiple fouls in dangerous positions early on, and were punished by Ryan Wittenbrink in the 25th minute.

The forward curled a free kick from about 25 yards out into the top left corner past a helpless Niklas Neumann to give the Hoosiers a 1-0 lead.

Maryland managed to outshoot Indiana 5-4 by the half’s end, but its strikes turned into just two simple saves for Hoosiers goalkeeper JT Harms. The Terps remained down one goal after the first half.

Nick Richardson sent a low cross into the penalty box in the 48th minute that found Stefan Copetti. The forward’s shot seemed destined for the bottom corner, but Harms made a diving save to maintain Indiana’s 1-0 lead.

Cirovski’s squad was able to limit the Hoosiers’ opportunities after their opening goal, holding Indiana to just six shots throughout the entire match.

Maryland’s defense helped it maintain the lead, maintaining possession through the second half. But the Terps failed to turn that advantage into concrete scoring chances until Copetti’s fateful tally.

“In the second half I just thought that we were in control the whole game with the exception of the two turnovers that led to their half chances,” Cirovski said.

Freshman Albi Ndrenika latched onto the ball just outside the penalty box twice with about 10 minutes to go, but both of his strikes sailed wide of the net.

[No. 8 Maryland men’s soccer coasts to 4-1 win over Delaware]

Colin Griffith earned a free kick that led to a slew of Maryland throw-ins, ultimately resulting in a corner kick that was only half-cleared before Bolma’s cross created Copetti’s title-winning goal.

“I’m still in shock, this is still surreal,” Chris Rindov said. “It’s been a hard hard year coming back from last year, kind of got beat down, but we knew what we were capable of and we knew if we continue to stick with it we’d be able to get it done.”

The Terps’ defense continued to clamp down after that goal, preventing a single shot on goal as they secured a much-needed victory that ended a six-year conference title drought and placed it atop the Big Ten standings again.

“The reason I came here was to win championships,” Copetti said. “Malcolm [Johnston]’s one of my really close friends and when I committed here I told him over text that ‘it’s time to win some rings here.’”