No. 8 Maryland men’s soccer coasts to 4-1 win over Delaware 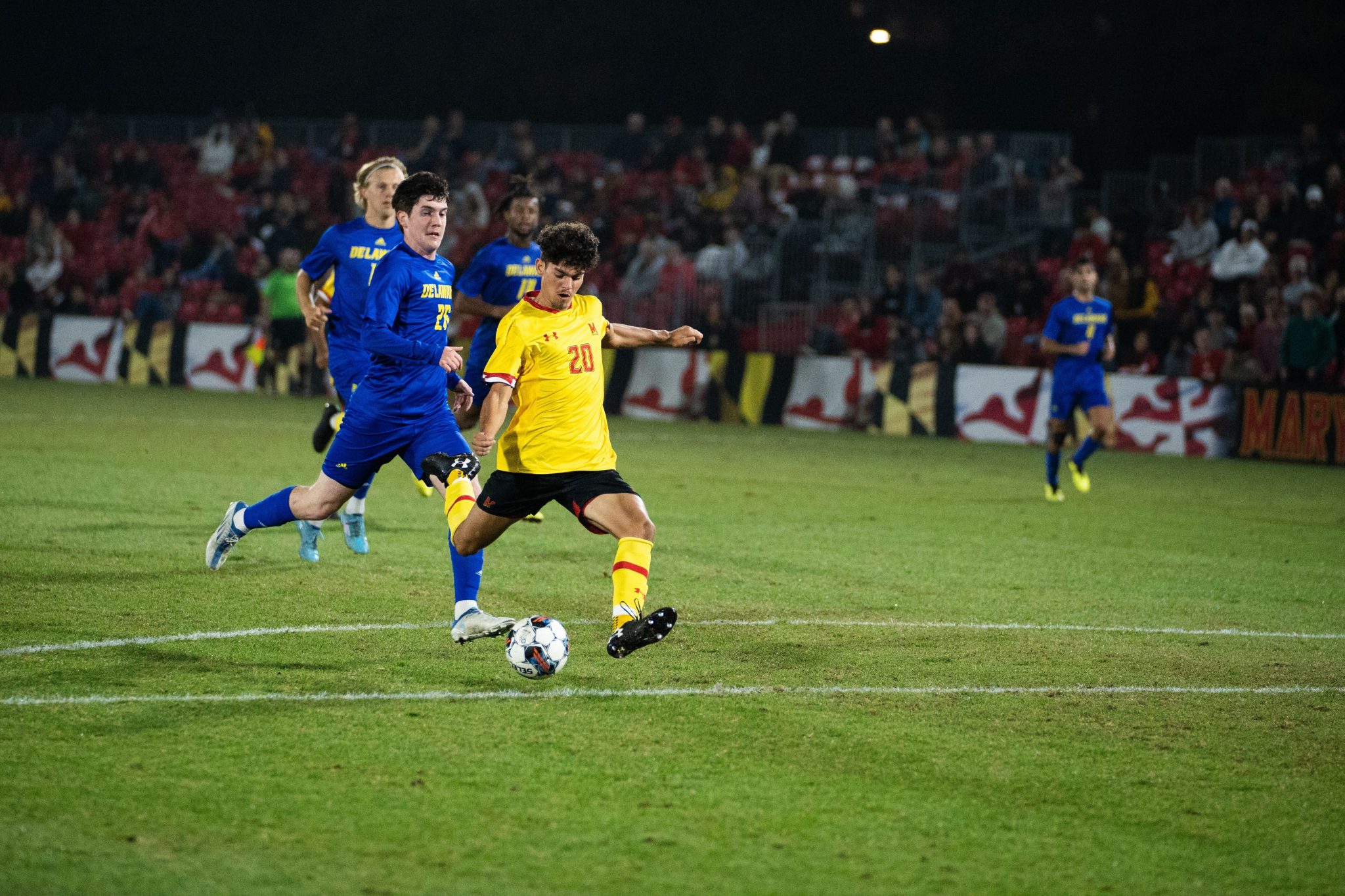 Stefan Copetti held his run before sprinting after Nick Richardson’s through ball.

The forward met the ball with lots of space but fired his strike straight at the Blue Hens’ goalkeeper. But on his next attempt, Copetti leapt over his defender and powered a header into the bottom right corner before celebrating under Ludwig Field’s flashing lights.

Copetti’s goal was the highlight of a strong day for the Terps’ offense, who scored three first half goals against Delaware. No. 8 Maryland men’s soccer cruised to a victory in its penultimate regular season match, defeating the Blue Hens 4-1 Tuesday.

The Terps will have a chance to clinch at least a share of their first Big Ten title since 2016 on Sunday against Indiana in their final regular season game. Maryland can win the conference regular season championship outright with a win over the Hoosiers.

Hunter George floated a lofted cross in behind Delaware’s defense that found the head of Griffin Dillon, who flicked his header inside the far post to give the Terps the lead in the 14th minute.

“Honestly, great ball from Hunter,” Dillon said. “I didn’t really have to do much, that ball was served on a platter for me so all I had to do was just redirect it on goal.”

Dillon finished the match with a goal and two assists, while George was subbed out in the 27th minute and didn’t return while sitting just one yellow card off a suspension.

Copetti quickly made up for an early miss to double Maryland’s lead in the 24th minute with a header that found the bottom corner from a Bolma cross.

The Terps continued their scoring onslaught 10 minutes later and converted for the third time on their fourth shot on target of the opening half.

Justin Harris was played in behind the Blue Hens’ defense by Dillon and rattled his finish off the bottom of the crossbar and into the net, his second goal of the year on his second shot of the season.“We’ve got some really good quality and I thought we moved the ball pretty well,” coach Sasho Cirovski said. “That was an exquisite first goal from Hunter to Griffin … It’s just what we needed to kind of get them worried a little bit and then be able to dictate the tempo of the game.”

Maryland’s 3-0 lead at half time allowed the Terps to feature plenty of players deeper on Cirovski’s roster.

St. Martin went from playing no minutes so far this season to the full game alongside center back Chris Rindov, filling in for the suspended Wiliam Kulvik.

“[St. Martin] came in there and we knew he obviously hadn’t played yet this season,” Rindov said. “He’s come in and he’s done the things that he needed to do. He kept it simple, played it smart, found some good passes and played very well.”

The two sides traded goals with under five minutes remaining, as DeVries scored his first career goal to cancel out an Orri Thorhallsson strike.

“Mack, who is a natural left center back, I just wanted to get him in the game and put him at left back,” Cirovski said. “He kind of looked at me on the corner and said ‘Can I go up? Can I go up?’ and I said ‘Go up and get a goal.’ So he listens well.”

The victory was Maryland’s largest since its 6-1 thumping of Virginia on Sept. 5, something the Terps will hope to replicate Sunday against Indiana to claim their first trophy since their national championship triumph in 2018.