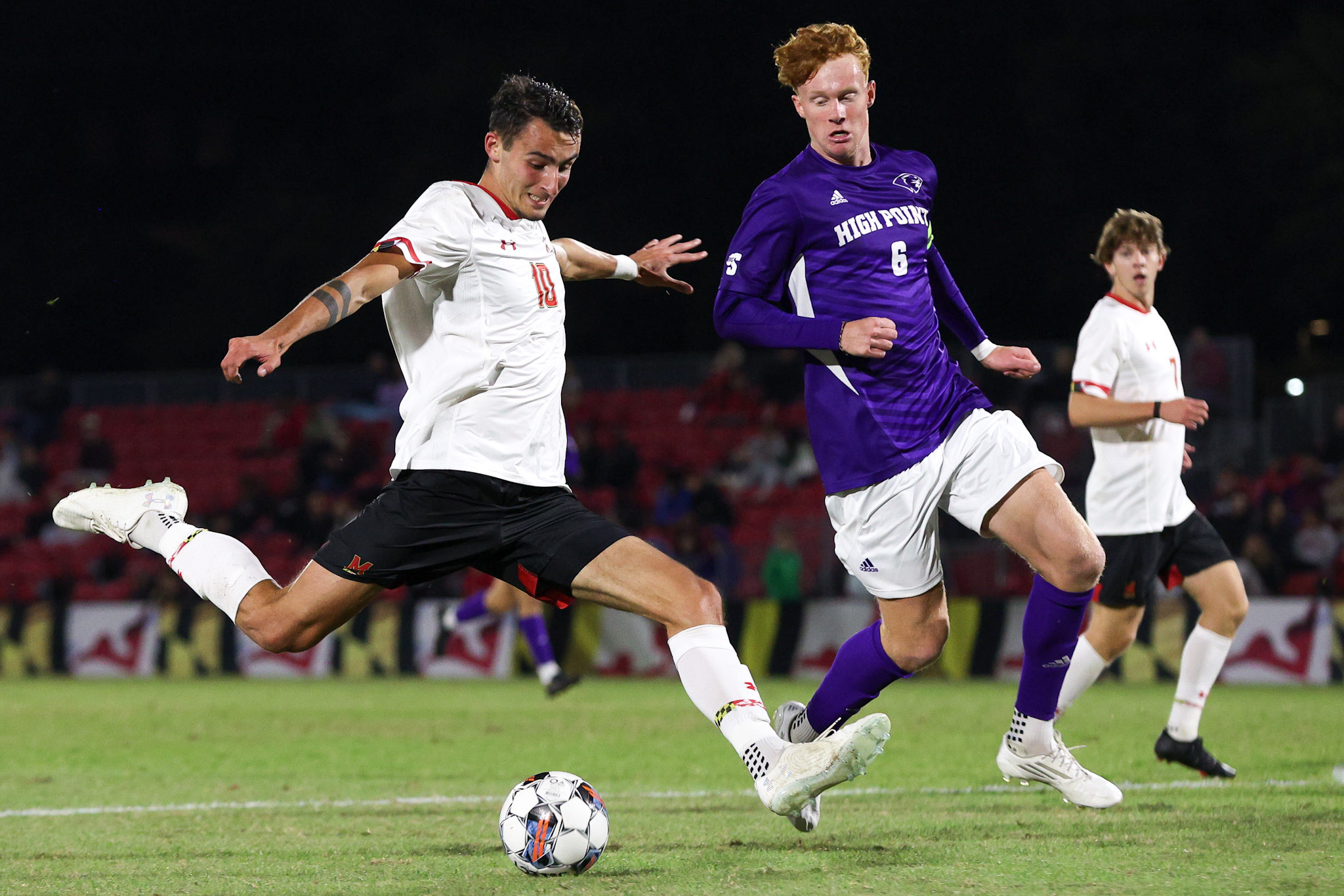 Maryland men’s soccer earned a free kick in its attacking half and lumped players forward, hoping to break a deadlock with just under 15 minutes to go.

But just as quickly as Joshua Bolma swung a free kick into the box, High Point cleared the ball away toward Brendan Krueger.

The Panthers midfielder played the ball through a dilapidated Terps defense to Sebastian Chalbaud. His shot was too strong for goalkeeper Niklas Neumann, who couldn’t keep out the senior’s effort as High Point took an improbable late lead.

“Right now we are the most gracious team in America,” coach Sasho Cirovski said. “We keep giving away soft goals and you can’t be a great team if you’re going to do that.”

“We challenged our team to be better defensively today and we did not meet that challenge.”

Maryland’s undefeated streak turned into a three-game winless run with the loss, as Cirovski’s squad drew Northwestern and Wisconsin before suffering their second loss of the season to the Panthers.

Neither team registered a shot until the 10th minute, as the Terps struggled to convert possession into scoring chances early on. They were without midfielder Malcolm Johnston and forward German Giammattei, who both didn’t play due to injuries, according to a team spokesperson.

Hunter George picked up the ball deep in Maryland’s half of the field. He turned and drove forward at a depleted High Point defense which was lacking players that it committed to a corner kick moments earlier.

The forward ventured up the pitch and knocked the ball through a defender’s legs before he stabbed a shot past the Panthers’ goalkeeper from inside the penalty box to give the Terps an early lead in the 19th minute.

Griffin Dillon came close to doubling the Terps’ lead twice throughout the rest of the half.

Dillon’s first shot crept just past the far post while he forced a diving save from Panthers goalkeeper Holden Trent.

Maryland notched just three shots on target in the opening 45 minutes, but controlled the play in its attacking half of the field. While the possession was split almost evenly at halftime, 64 percent of the Terps’ control came in High Point’s half of the field.

“The first half we played very positive, we scored a great goal, we maybe even deserved another,” Cirovski said.

However, Maryland turned the ball into its own net to start the second half. William Kulvik attempted to cut out a Panthers cross but deflected it toward his own net, looping the ball over Neumann to equalize for his opponent.

“We made a key mistake and that does change the tide, gives them belief and then becomes an uphill battle [in] the second half,” Cirovski said.

The Terps came close to drawing even in the 53rd minute, as a Bolma cross forced Trent out of his net and a failed clearance allowed Joe Suchecki a header at an open net. However, a High Point defender was able to clear Suchecki’s shot off of the line and away from danger.

Maryland had multiple set piece opportunities in the waning minutes of the match, but George blasted a free kick from just outside the penalty box over the bar before Kulvik’s 87th minute header hit the post.

The Terps couldn’t find the back of the net for a second time despite committing almost all their players forward and creating a flurry of chances as the clock wound down. A Chris Rindov header with 31 seconds left was parried away by Trent, and Maryland’s ensuing corner kick went out of play to seal its fate.

“We also need to score more goals in this game,” Cirovski said. “Hunter scored a great goal but we have too many other opportunities, whether it was off headers or chances in the box that we just didn’t take very well.”