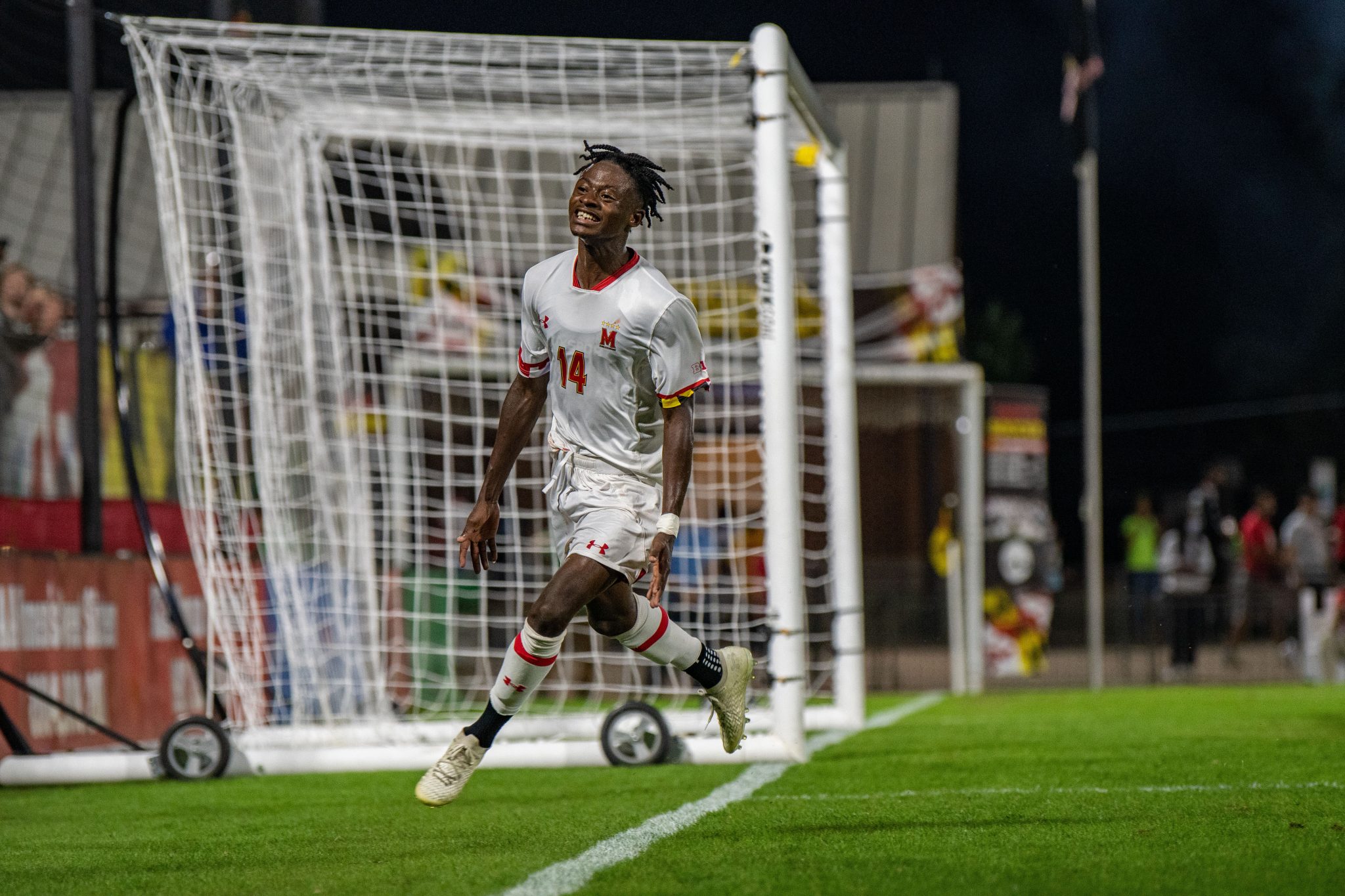 Joshua Bolma used his chest to control a looping clearance before he let the ball bounce once at the top of the penalty box.

His half-volley beat the Wisconsin goalkeeper and found the bottom left corner. Bolma stayed rooted to the spot of his strike to celebrate before Alex Nitzl lifted him into the air.

“I was just trying to wish him a happy birthday,” Bolma said. “It was a special day for him and you know, we’re doing this for him, for us [and] everyone else to just kind of celebrate the moment with him.”

The redshirt sophomore flashed his influence throughout the Terps’ 2-2 draw against the Badgers. He finished the game with a goal and an assist, but also created multiple scoring opportunities Maryland forwards didn’t convert.

Bolma’s goal was his second of the season and the first he scored since a one-goal, two-assist performance against Virginia Sept. 5. He recorded just one point since the Terps’ Labor Day victory, an assist against Ohio State Sept. 25.

“I’m definitely building a lot of confidence,” Bolma said. “I’m a player that needs to be scoring and getting on the end of goals and helping the team of course. It was just kind of a boost for me really.”

Bolma controlled a long pass from William Kulvik to get to the endline and square a ball to Stefan Copetti in the ninth minute, but the forward’s strike from inside the penalty box was blocked.

About six minutes later, Bolma found Copetti again with a looping ball over the top of Wisconsin’s defense. Copetti’s shot beat the goalkeeper, but was cleared off of the line by a Badgers defender to keep the Terps out again.

Maryland couldn’t score in the first half despite Bolma creating another one-on-one opportunity for the Terps, playing a pass with the outside of his foot that beat multiple Wisconsin defenders and found German Giammattei. The Amherst transfer’s strike was kicked straight at an onrushing Carter Abbott.

Copetti blasted a strike into the top right corner, an opportunity Bolma created at the beginning of the second half.

Bolma failed to finish an opportunity himself right after the Badgers regained the lead, sailing a first-time shot from inside the penalty box over the bar. He equalized just minutes later, but the Terps couldn’t find a winner afterward.

“We should have gotten a better result,” Bolma said. “We just got a little unlucky and next time, we just got to take our chances because we could have easily won the game by three or four goals.”

While Maryland dropped two points in conference play against a team toward the bottom of the Big Ten standings for the second straight game, Cirovski was more than pleased with Bolma’s performance against Wisconsin.

“That was the best performance Josh’s had all year,” Cirovski said. “You can see he’s starting to get his body back and his legs back. He’s been beaten up all year, but you could sense tonight that he felt a little stronger.”

“He was the best player in the field,” Cirovski said.