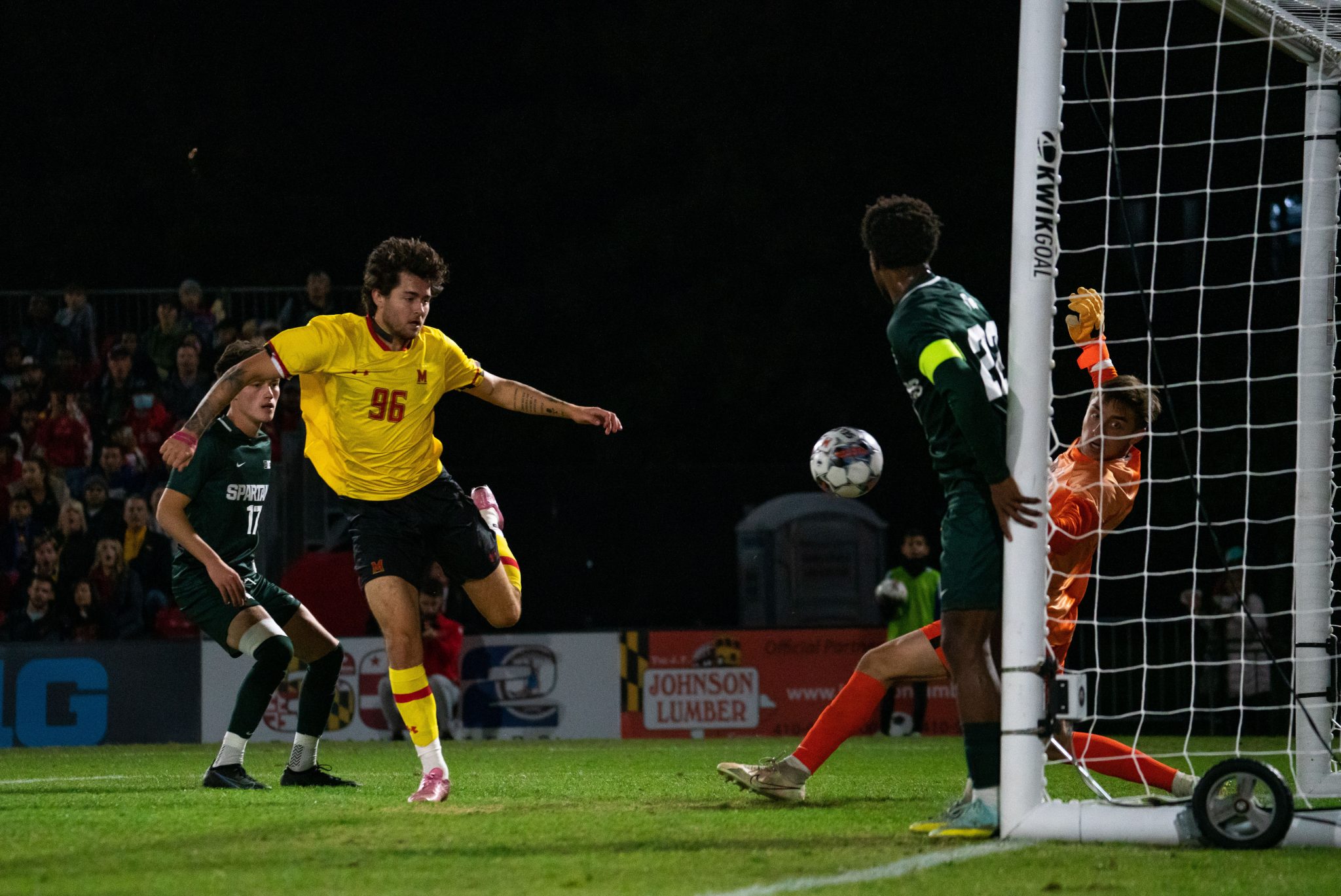 Maryland registered shot after shot as the clock wound down, struggling to find the back of the net for a second time in the match.

However, the Terps didn’t need another goal. Their defense denied the Spartans a shot for the full 90 minutes, and William Kulvik’s early set piece goal kept them undefeated in conference play.

No. 8 Maryland men’s soccer snapped its three-game winless streak with a 1-0 win over Michigan State Friday, recording its first shutout since its win over Old Dominion on Sept. 30.

The victory gives the Terps the opportunity to clinch their first Big Ten regular season championship since 2016 with a win in its upcoming match against Indiana on Oct. 30.

“It’s just everything we wanted, a big night in Indiana against a good opponent,” Alex Nitzl said. “These are the games why you come to Maryland, because you want to play these games and I’m so excited for that … It doesn’t get much better than this.”

Maryland took an early lead after Michigan State couldn’t clear Hunter George’s low corner kick. The forward’s cross was deflected by Griffin Dillon and fell to Chris Rindov, who shoveled a weak first-time strike toward goal. Kulvik pounced on Rindov’s scuffed shot to score his second goal of the season in the 13th minute, both of which came off of corner kicks.

The Terps almost doubled their lead in the 37th minute. Dillon met Joshua Bolma’s free kick with a strong diving header, but Spartans goalkeeper Owen Finnerty was able to parry the midfielder’s attempt away.

Maryland took its 1-0 lead into halftime without allowing Michigan State to register a shot in the opening 45 minutes.

“We kept our lines a little bit more compact,” coach Sasho Cirovski said. “We moved a lot better as a team so I think we were more connected. And then we competed for 90 minutes.”

Bolma created another chance for the Terps to take a 2-0 lead in the 51st minute, playing a backheel pass through the Spartans’ defense to Stefan Copetti. The forward charged through on goal all on his own, but placed his shot straight at Finnerty.

The game slowed after Copetti’s chance with five fouls and six yellow cards handed out in a ten minute span. There were a total of 23 fouls and 10 yellow cards throughout the match.

Dillon was denied by Finnerty again in the 77th minute after his half volley was tipped over the bar. Nick Richardson came close with a chance of his own in the 84th minute, but Michigan State’s goalkeeper was once again able to beat his effort away.

Maryland couldn’t capitalize on any of its late chances, but was able to hold the Spartans zero shots after coach Sasho Cirovski called the Terps “the most gracious team in America” following its 2-1 loss to High Point Monday. The Terps gave up two goals on two shots on target in the defeat.

“Our coach challenged us and I think we all were upset about it,” Alex Nitzl said of the team’s defensive performance. “It was incredible. I mean, we completely outworked them today.”