Review: ‘The Banshees of Inisherin’ is the perfect mix of comedy, gore and beauty 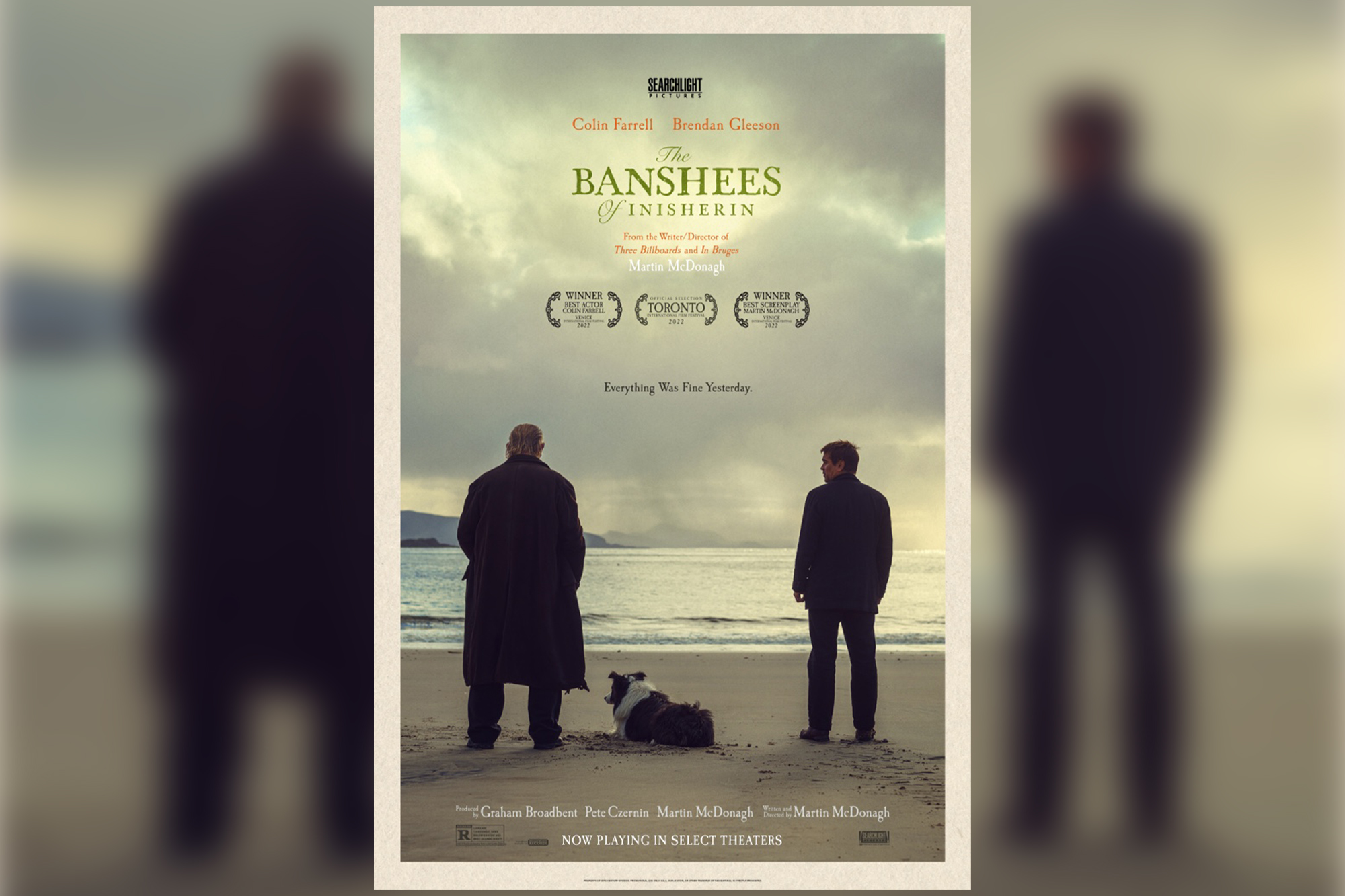 Two men. A friend breakup of epic proportions. 1920s Ireland. A bell-wearing donkey. It may sound disjointed and boring, but Martin McDonagh’s newest dark comedy, The Banshees of Inisherin, is anything but.

McDonagh is one of my favorite playwrights. His often surprisingly grisly, yet tender works just scratch an itch in my brain I cannot place. Some of his most famous plays are in his Aran Islands Trilogy, a collection of plays based in the Aran Islands off the coast of Ireland.

Outside of the theater sphere, McDonagh has had considerable success in film, including the 2017 award-winning drama Three Billboards Outside Ebbing, Missouri and 2008’s black comedy In Bruges. The Banshees of Inisherin actually reunites the two lead players from In Bruges: Colin Farrell and Brendan Gleeson.

Farrell plays Pádraic, a dull but usually well-meaning man who lives on the fictional island of Inisherin with his sister Siobhan, played by Kerry Condon, and his best friend Colm, played by Brendan Gleeson. One day Pádraic goes to ask Colm to go to the local pub with him only for Colm to completely ignore him. Eventually, Pádraic’s pestering leads Colm to tell Pádraic he wishes to end their friendship completely and wants Pádraic to stop talking to him.

[Review: Netflix’s ‘All Quiet on the Western Front’ is a true anti-war film]

Reflecting the Irish Civil War playing out on the mainland, a civil war between the two men brews on Inisherin. As with McDonagh’s other works, this seemingly menial conflict leads to comical hijinks, larger misunderstandings and a bit of vomit-inducing gore. Farrell and Gleeson both give excellent performances in the film, making their characters both annoyingly stubborn and sickeningly sweet. The intertwining of the men’s lives as they try to understand their new relationship and each other honestly plays out more like a harsh breakup than the dissolving of a friendship.

While the film is overwhelmingly funny — the woman next to me in the theater wiped tears away from laughing funny — it also utilizes its humor to delve into darker topics, such as death, isolation and depression. The 1920s island setting hammers in the isolated feel, where there are only limited options for people to talk to on a day-to-day basis and even more limited options of people to befriend.

One of these islanders is the dim-witted Dominic, played by standout Barry Keoghan. At first, Dominic seems like pure comic relief to the dry humor of Pádraic and Colm, but as the film progresses, we see undertones of sadness in Dominic’s behavior. Keoghan, who might be best known for his part as a prisoner hinted to be the Joker at the end of the most recent Batman film, delivers with full force. He plays up the comedic aspects but never lets the audience forget that behind every laughingstock, is a real person dealing with their own problems.

I won’t spoil the entire film for you, as I think the best moviegoing experience for this film is going in blind, but I will warn you there is a plot point that revolves around a rather gory subject that has something to do with fingers. My gag reaction to the gore is nothing compared to the emotional response I had to the rest of the film.

[Review: Netflix’s ‘The Watcher’ is strikingly mysterious but lacks depth]

The sweeping cinematography of rocky cliff sides and rolling hills paired with choral and traditional Irish music create a perfect picture of the place these characters call home. Each frame feels like a painting advertising either the despair of Ireland or its beauty. The dialogue is quick and snappy, allowing for the film to quickly devolve from a small “row” into a full-blown war. It also questions greater topics like how will we be remembered when we die, how can you be happy with yourself and how can you feel less alone.

The connections forged between Pádraic and his sister, Pádraic and his beloved donkey Jenny and Pádraic and Colm make for ever-changing interesting dynamics that never make the film feel slow. If you aren’t a fan of McDonagh’s style, you may not like the anticlimactic ending scene, but will still be satisfied with the action and quick pace of the rest of the movie. Although the film has been released in Los Angeles and New York, it is finally getting its Washington, D.C.-area release on Nov. 4. Already getting awards and garnering Oscar buzz, The Banshees of Inisherin may be McDonagh’s most archetypal film yet, and that is very much a good thing.