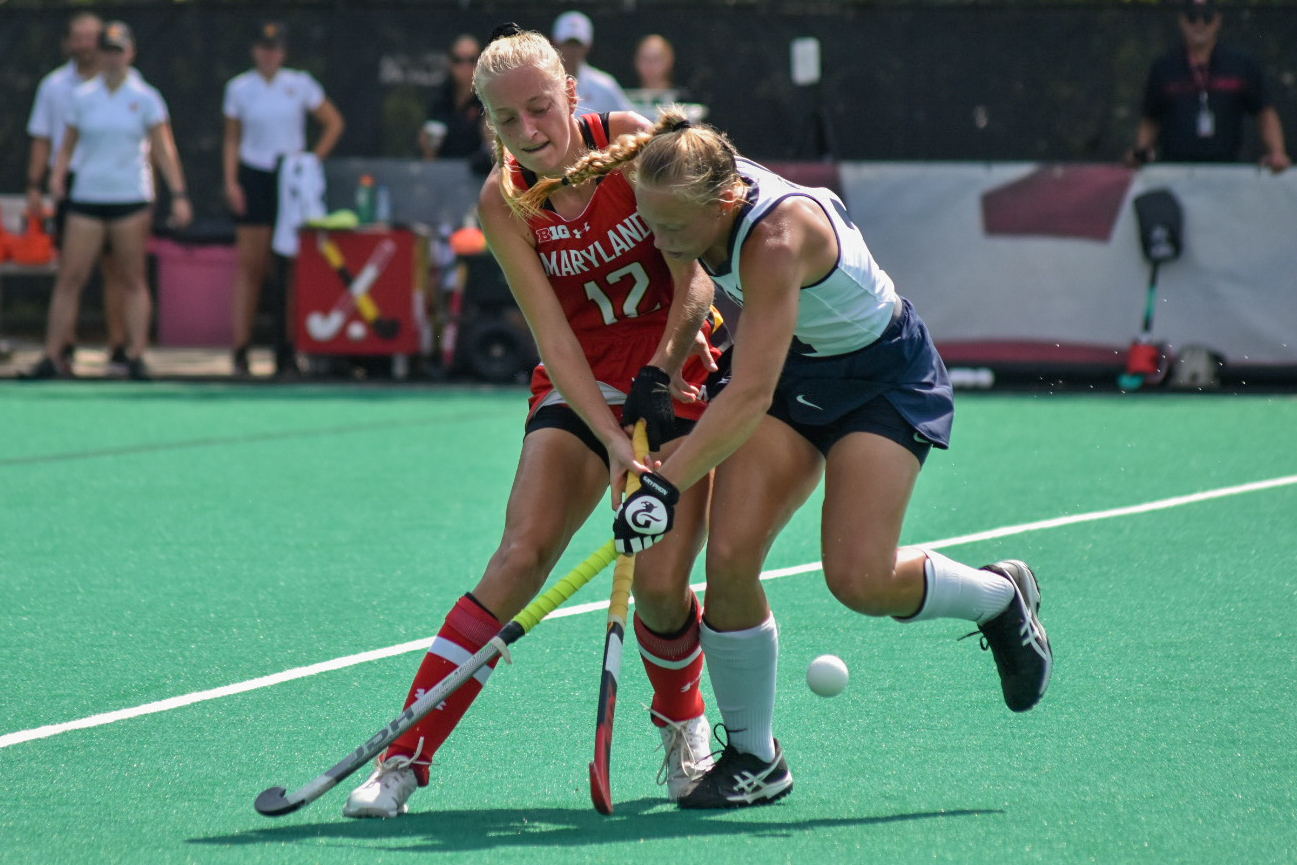 Maryland field hockey hasn’t beaten Penn State in 588 days, dating back to March 2021 when the 2020 season was moved to the following spring.

That stretch includes two losses in the 2021 campaign, one in the regular season and the other to eliminate the Terps in the Big Ten tournament via a 3-2 defeat.

The fierce rivals face off for the first time this year Friday for a top-five matchup in Maryland’s final conference game that could decide the Big Ten regular season title.

“As a team, we’re hype for every game,” Ericka Morris-Adams said. “But this game, I think we’re especially hype.”

The Terps clinched at least a share of the title last week when they outlasted Rutgers after a fourth quarter that featured five goals and three lead changes. The madness ended with Maryland hoisting the conference title trophy — but they don’t have full claim to it just yet.

A win over the Nittany Lions on the road will give the Terps the outright Big Ten regular season title, and thus the No. 1 seed in the conference tournament.

A loss keeps the door open for Penn State to steal it away.

Its 5-1 record against conference opponents puts it within striking distance of a first-place tie. Wins over Maryland and the Scarlet Knights next week would result in a split of the conference title between the Terps and Nittany Lions.

A Maryland win would do more than win the conference. Currently at 7-0 in Big Ten play, defeating Penn State would result in a perfect conference slate. The Terps haven’t done that since 2015 when they went on to win the conference tournament and reached the national quarterfinals.

“It would just be a message,” Missy Meharg said. “Anytime that you go undefeated in anything, it’s just a message that you’re powerful, that you’re dominant.”

Maryland’s loss to Penn State last postseason was the end of the road for its conference championship hopes, but just the beginning of a deep postseason run.

The Nittany Lions matched the Terps until a fourth quarter goal put the opposition up 3-2, a lead Maryland never answered.

But the Terps won their next two games following the loss to advance to the national semifinal following victories over No. 13 Virginia and No. 10 Syracuse.

“We definitely learned from that loss,” Bibi Donraadt said.

They ultimately fell to eventual runner-up Liberty in double-overtime but the Penn State defeat weeks earlier propelled Maryland to its first semifinal appearance since 2018.

“It was a message that if you don’t concentrate, and have preparation — consistent preparation — a good team is going to take advantage,” Meharg said. “It was a bit of a lesson for us.”

The Terps and Nittany Lions’ postseason history goes back further. Maryland lost to Penn State in the 2019 Big Ten tournament, doing so as the top seed in their opening game after earning the coveted first-round bye.

Maryland outshot Penn State 15 to seven, but couldn’t find the net in the 1-0 loss. The Nittany Lions scored the game’s only goal seven minutes in and kept the Terps scoreless throughout. Despite the three years that had passed since the loss, Meharg delivered a thinly-veiled critique of the game’s officiating.

“Go back and look at that game and talk to the people in black and white,” Meharg said. “I’m sorry, we played a really good game … I have nothing to say about that. We were a really good team.”

A win Friday will give Maryland a flawless regular season finish against conference opponents, the outright regular season title and the No. 1 seed in the Big Ten tournament.

The Terps enter the most influential game of their season looking to defeat the Nittany Lions for the first time in two seasons. This time, they’re equipped with the painful takeaways that came with recent shortcomings against them.

“The lessons we’ve learned will definitely help us prepare for tomorrow,” Donraadt said. “It’s going to be very exciting.”