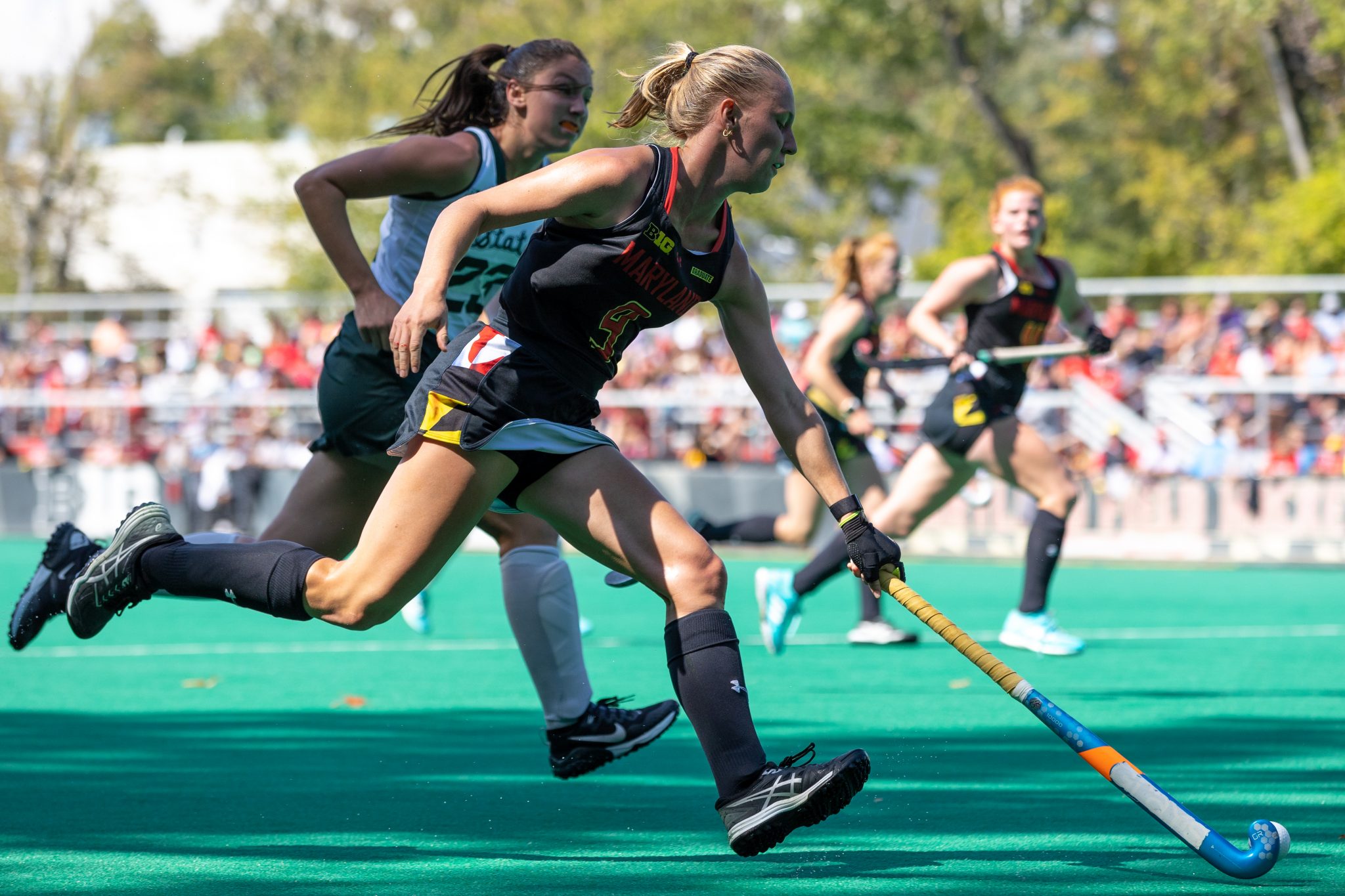 What began as a dominant defensive showing for both sides suddenly became an offensive explosion in the final quarter of Maryland field hockey’s matchup with Rutgers Sunday with a share of the conference regular season championship awaiting the Terps if they were victorious.

Five goals were scored in the fourth frame, including four in the last five minutes. The Terps’ 3-1 lead, which they acquired with five minutes to play, was quickly erased by two Scarlet Knights goals.

However, Leah Crouse scored last during the outburst, finding the net with less than a minute to go after Rutgers fought back for a game-winner that gave No. 2 Maryland a 4-3 win over the No. 20 Scarlet Knights and clinched a share of the Big Ten regular season title.

“I remember a game one time to win a national championship where we were … down and we had pulled our goalie,” Missy Meharg said. “We had the ball in our back left corner against Carolina, we went the distance, got a penalty corner and ended up scoring with no time on the clock to tie it and then won in overtime. It just feels like that.”

The come-from-behind victory marks Maryland’s fifth win of the kind this season. It previously overcame early deficits to Iowa and Northwestern before taking down both in overtime.

It was forced into a similar situation by Rutgers, who deployed an aggressive and fast defensive approach that produced countless turnovers. Stellar goalkeeping contributed, too. Scarlet Knights’ goaltender Sophia Howard made four saves in the first half and five in the second.

It took over 30 minutes of game time, but Maryland finally answered Rutgers’ initial score. Margot Lawn scored the equalizer late in the third quarter and Crouse scored to give the Terps their first lead early in the fourth.

The Rutgers offense did just enough to supply its suffocating defense with an early lead, but little more throughout the second and third quarters. After their game-opening goal early in the first quarter, the Scarlet Knights’s attack didn’t attempt a shot in the second and just two in the third to keep Maryland in the game.

Donraadt opened the late scoring frenzy with five minutes remaining, putting the ball into the net after she collected a rebound on a penalty corner miss.

With Rutgers’ offensive shortcomings since the first quarter, the two goal lead appeared it would be hard to overcome. The Scarlet Knights pulled their goalie to give them an advantage on the forward line, hoping to start a comeback of their own.

[No. 2 Maryland field hockey dazzles in 11-0 throttling of Georgetown]

Fifty seconds passed before Rutgers halved the lead, and less than two minutes later it evened the contest once more at 3-3.

“It becomes their game,” Meharg said. There’s nothing a coach can really do.”

Crouse had a look at an open net with one minute to play. Howard fell to the turf while blocking the previous shot, which gave the graduate transfer an opportunity to tap in the game winner that secured Maryland’s first Big Ten regular season title since 2019.

“I actually was on the board, trying to figure out who had enough physio left in their GPS units to play in overtime so I actually didn’t see the final goal,” Meharg said.

Maryland’s ability to match and surpass Rutgers’ offensive eruption in the game’s final minutes kept the Terps undefeated at home and in conference play, while giving them a share of the regular season conference championship with three games still to play.

“This team’s amazing, they find a way to win,” Meharg said. “The resilience and fortitude and collectiveness to believe that even having two goals scored against you in such a short amount of time to go down and find a way to get a final goal is a testament to their character.”