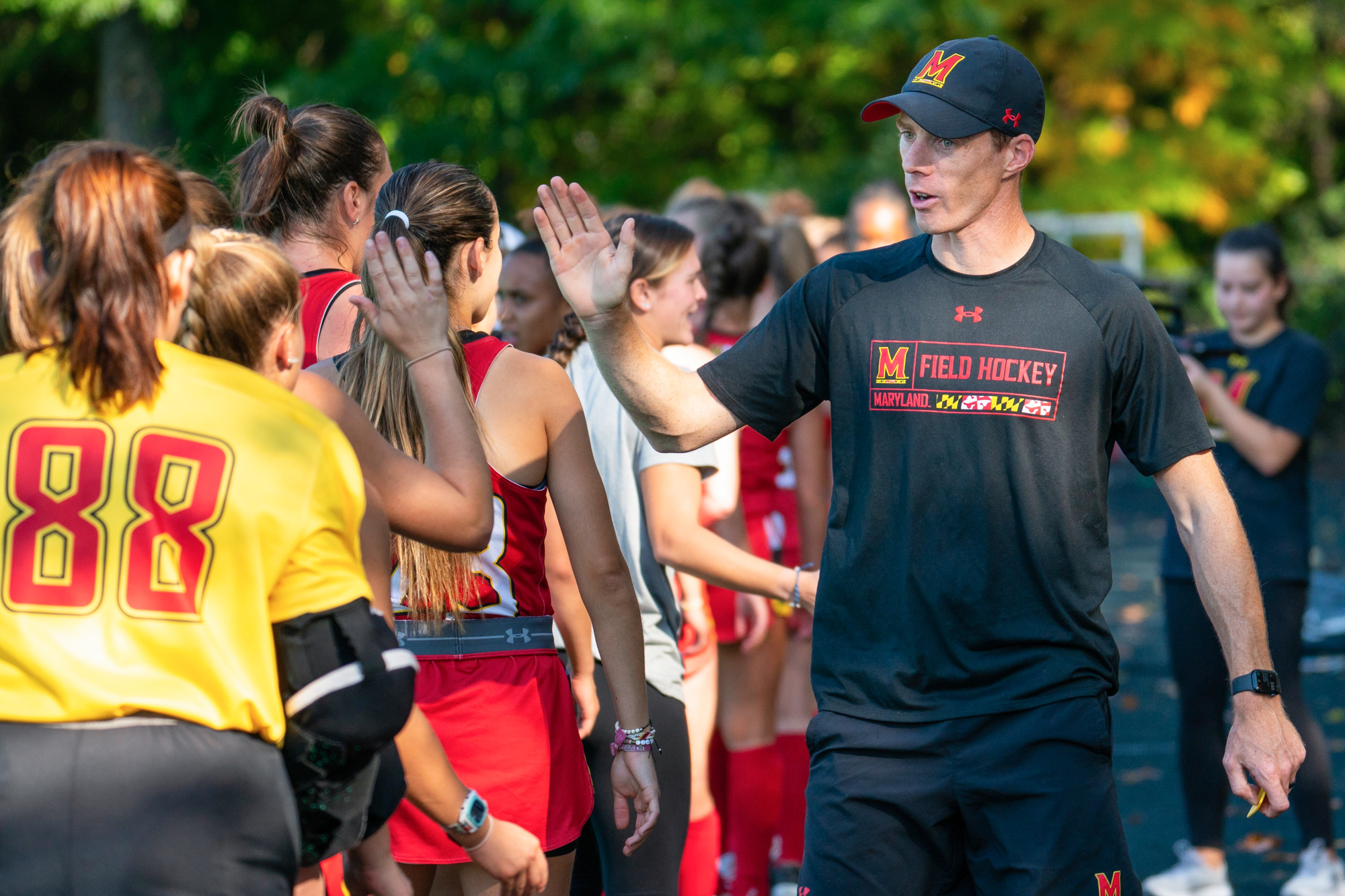 Missy Meharg had a position open on her staff after the 2020 season. Maryland field hockey’s veteran coach was unsatisfied with her team’s defensive performance in recent years, so she began scanning the field hockey world for an assistant to help her improve it.

It didn’t take her long to find the ideal target.

Scott Tupper had played and coached all over the world before Meharg approached him about coming to College Park. He had represented Canada in multiple Olympic games and then climbed the coaching ladder to an assistant role at Lafayette, the position he held when Meharg called him to offer the job.

After a lengthy recruiting process, Tupper brought his expansive resume and international experience to Meharg’s staff. Now in his second year, a rigorous and demanding coaching style has helped Tupper reshape the Terps’ backfield and turn it into one of the nation’s best units.

His time with Maryland featured “ebbs and flows,” Meharg said, because of how players initially responded to his abrasive coaching methods.

“There have been some moments,” senior defender Maura Verleg said. “We were never used to him being pretty hard on us. I just had to get used to it.”

Tupper, a Seattle Seahawks fan, looks up to Pete Carroll and his coaching philosophies. He read Carroll’s book and applies its lessons to his own career. His international playing and coaching experiences developed his tactical acumen, but Carroll’s teachings shaped his day-to-day approach.

Carroll knew he couldn’t guarantee how his players showed up to practice, Tupper said. But as a coach, both know they have to show up every day to drive the quality of the session, he said. He makes a point of that, trying to increase the energy and demand more of his players.

Meharg, Tupper and the rest of the coaching staff handled all aspects of the team together during the 2021 season. Meharg sought to change that for 2022 and segment their responsibilities. She made it clear that Tupper would become the defensive coordinator, allowing him to work full-time with the unit.

[No. 2 Maryland field hockey dazzles in 11-0 throttling of Georgetown]

The position group is led by Verleg, who mans the center of the field in a similar position to what Tupper played. It’s led to a distinctive relationship between coach and player where the former scrutinizes the latter’s play.

“She might even get a more critical eye … because I really have a feeling of how I want that position to be played,” Tupper said. “She hears my voice raised in her direction more than some others.”

Verleg said she’s learned a lot from Tupper the past two years.

“I can definitely see that I’ve grown as a player,” she said. “He knows exactly what I should do in specific situations.”

Rayne Wright doesn’t play Tupper’s old position, but she’s just as instrumental to the Terps because of her ability to anchor the sideline defensively and eliminate opponents’ passing options.

“She’s extremely, extremely reliable defensively,” Tupper said. “She can be a really difficult player to play against one versus one … She’s tough. While we’re not a contact sport, toughness is a big part of playing defense and being good without the ball. I think she checks a lot of those boxes.”

She won national and Big Ten defensive player of the week earlier this season when Maryland held Iowa and Northwestern to one goal each. Wright in particular stymied Bente Baekers, who leads the Wildcats’ with 18 goals, to one goal.

“He has so much experience,” Wright said. “He just has so much simple insight. If you play simple defense, simple hockey, it’s going to be the best brand of hockey.”

Tupper began amassing that field hockey experience and insight when he was about six years old. Growing up in Canada, his family had no connection to the sport, and his first focus was ice hockey.

But a childhood friend’s father who played for Canada’s national field hockey team introduced a young Tupper to the sport.

The game became a way for him to stay in touch with the friend as the two aged and moved apart and by high school, field hockey overtook ice hockey as his center of attention.

Defense attracted him. It became the position he started to play full time, originally out of necessity because he wasn’t the fastest player, he said.

He joined Canada’s national team years later. He participated in three Olympics and more than a dozen other international tournaments and played in 313 career games.

Tupper holds Canada’s record for goals in a single game with five during the 2016 Rio Olympics and served as the squad’s captain starting in 2012.

Canada lags behind other countries that dominate the sport’s international play, giving Tupper the chance to play against premiere competition — often as the underdog.

The games and training can grow difficult, especially often playing as the overmatched team, Tupper said. He made it a point to separate on-field play from the surrounding experience of the competitions to gain a fuller appreciation.

“I really enjoyed anytime I got to be in an athlete’s village,” he said. “Even just the simple stuff like being in the dining hall with all the different countries.”

Tupper credits the wide array of coaches he played for and the skill of his opponents for influencing his coaching style. He picked up techniques, strategies and ideas from each of his stops, giving him a unique coaching style with contributions from around the world.

His first stop as a coach came at the youth level in his home country. He sent eight Canadians to Division I programs as the head of programming and recruiting and on-field coach at the Rob Short Coaching Academy of Vancouver. Later, he coached Canada’s U21 men’s national team for three years.

Tupper made the move to the NCAA and joined Lafayette coach Jennifer Stone’s staff as an assistant for the 2020 season. Later that year, Meharg reached out and Stone allowed him to entertain the offer, which he ultimately accepted.

“It took me by surprise,” Tupper said. “Missy’s someone who’s done a whole lot in the women’s game and been such an iconic coach within the sport. To hear from her that she would be interested in me putting my name in the hat was flattering but also quite exciting.”

Maryland is coming off of a two-game stretch where they’ve outshot opponents 76-2, including limiting Georgetown to zero shots Tuesday, the first time it’s done so to an opponent in three years.

The Terps also sport the second best scoring margin in Division I this season, powered by the nation’s best offense, but Meharg allots much of the praise to a defense that’s allowed the 19th fewest goals in the country.

“I credit it more towards our defense and the way we structure and handle the ball,” she said. “We’re so crisp and sharp.”

Maryland is on the brink of closing out one of the best regular seasons in program history. It’ll play four more games before moving on to the Big Ten tournament — where it’ll likely have the No. 1 seed.

Tupper’s demanding approach and vast experience has transformed the Terps’ defense. In just his first year in control of the unit, he’s helped shift it from a part of the team Meharg viewed as a weakness to one of her squad’s biggest strengths.