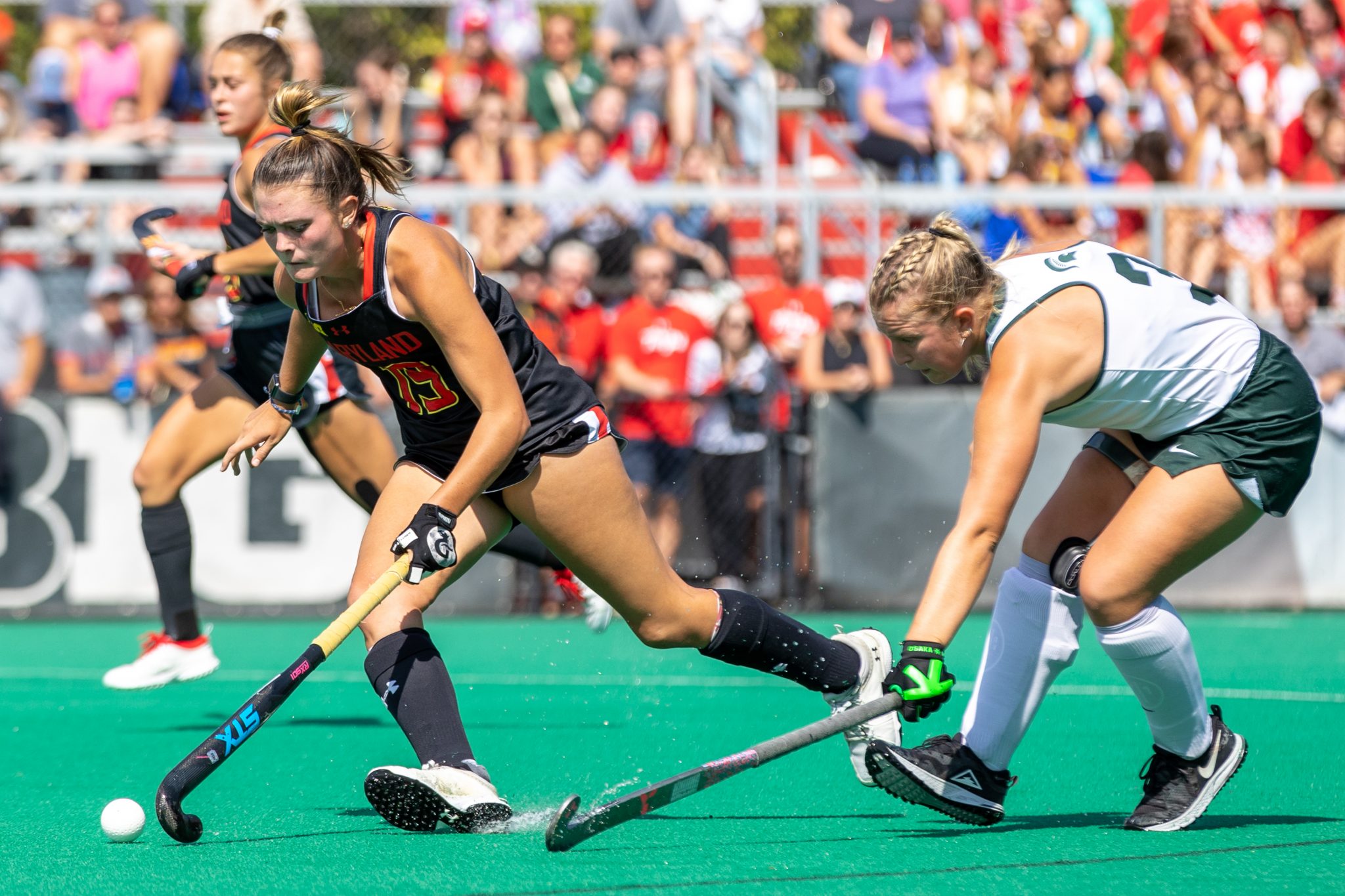 Maryland field hockey took down then-No. 2 Northwestern and No. 3 Iowa — both on the road — and set a new season-high in shots attempted in a 5-1 beatdown of Indiana in its last three contests.

The wins came in different ways. Graduate transfer and team captain Danielle van Rootselaar scored all four of the Terps’ goals, including both overtime game winners, in triumphs over the Wildcats and Hawkeyes. Eight different players logged goals or assists against the Hoosiers.

The one constant in all three of the victories, however, is Maryland came out on top without Hope Rose.

Rose, the team’s leader in goals and assists, has missed three straight games with a lower body injury, according to a team spokesperson. The reigning second team All-American and Big Ten freshman of the year was not in uniform for the Terps’ three wins, instead sporting a walking boot on the sideline.

Despite the absence of its most impactful player, Maryland’s offense has continued to be one of the nation’s best. The Terps took 34 shots against Indiana to remain undefeated in Big Ten play. Twenty-three of them were on goal, translating to consistent pressure on a Hoosiers defense that never found an answer.

Maryland ranks third in goals and assists in Division I play this season, scoring an average of 3.85 times with 3.31 helpers per game. The Terps have scored nine goals in their three games without Rose with almost every score being assisted, a rate that lines up with the one they’ve boasted all season.

Coach Missy Meharg’s offensive depth has allowed other forwards and midfielders to step up and fill the hole left by Rose, including some unfamiliar faces.

Nathalie Fiechter notched her first goal of the season in the win over Indiana and assisted a goal against Iowa. Margot Lawn scored for the first time in five games against the Hoosiers.

Riley Donnelly collected her second goal and assist of the year and took a season-high five shots in just her third start as she works her way back from hip and knee injuries.

“Fortunately, we’re very deep,” Meharg said. “We’ve got 13 or 14 really talented players at every level that can come in and play.”

Versatility is a skill Meharg frequently stresses, and it’s a strategy that’s allowed her to move players around based on her team’s needs or if the matchup calls for it.

The coach has been forced to shift pieces even more without Rose to anchor the offensive attack. She highlighted Leah Crouse and Donnelly specifically as players who’ve shuffled around to take over Rose’s role.

Crouse can play at forward or in the midfield, Meharg said. Donnelly has already been used in a myriad of spots, a usage the coach will continue to deploy as long as Rose is out.

“We’ve got the depth to be able to accommodate her situation,” Meharg said.

Bibi Donraadt, who led the team in goals in 2021, is becoming more relied on to shoulder some of the offensive load. The graduate student who returned for her fifth season has had her three best games of the season by stats in the three matches without Rose on the field beside her.

Donraadt’s seven shots taken in the Indiana win was a season high, and her 10 shots in three games without Rose are her most over a three-game stretch all season.

“Without Hope, it’s really been a change for us,” senior midfielder Emma DeBerdine said. “But we’ve had a lot of forwards really step up.”

Maryland’s currently in line to be the top seed at this year’s Big Ten tournament with five regular season games remaining. The Terps may be forced to hold on to that No. 1 spot without Rose’s help.

The sophomore is being evaluated regularly, a team spokesperson said. It’s unclear when the injury occurred or what her return timetable looks like. But with a heightened focus on positional versatility while using more of its depth and relying on veteran shot takers more heavily, Maryland has handled the burden of the loss with ease.