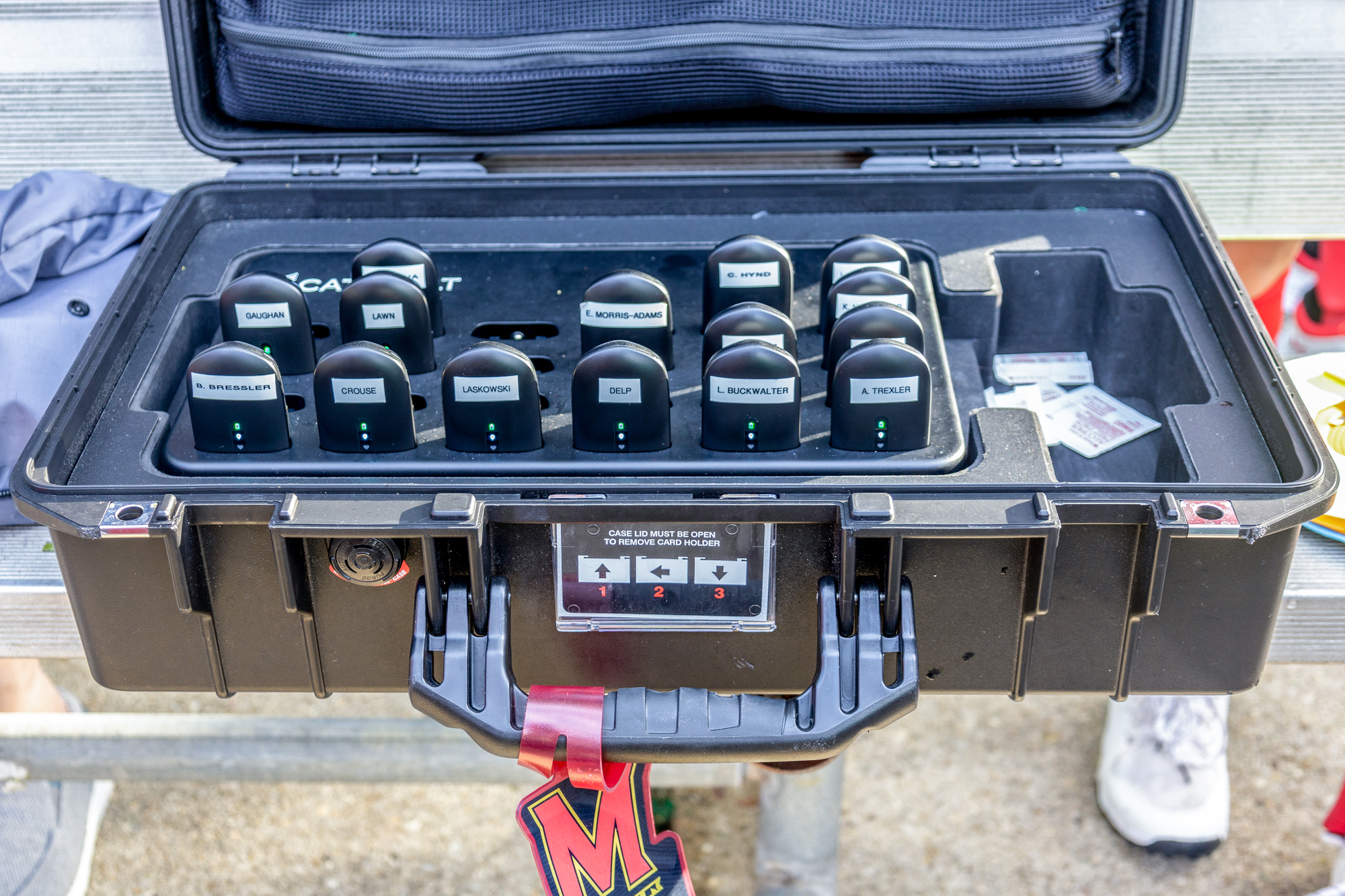 Missy Meharg’s decision-making process used to be solely informed by intuition, but now a device the size and shape of a computer mouse helps Maryland field hockey’s coach with in-game strategy, practice schedules and training regimens.

The team utilizes Catapult Vector GPS tracking devices on all of its players. The devices fit inside a small pocket on the back of players’ uniforms and keep tabs on their sprint speed, distance traveled, heart rate, calories burned and more.

“You can see basically everything,” senior defender Maura Verleg said.

The devices relay those data points to Meharg and the training staff in real time. They are used to make substitutions and are examined extensively throughout the week to keep players in ideal condition.

The technology overhauled how Maryland creates season-long training programs in the decade they’ve been used.

“I like to coach from what I see,” Meharg said. “So this has been a little change for me to look at numbers.”

Among the main data the devices track are sprint speed and distance traveled on the field. They are the key variables that aid substitution decisions and grading practice intensity.

With games typically on Fridays and Sundays, the Terps’ goal is to slowly ramp up to game speed in time for the weekend. They aim to reach maximum speed two days before a game, Verleg said. That’s when the most intense practices, which usually consist of condensed simulated games, take place.

“[We want] to make sure that we get them at the right sprint speeds and mileage that would emulate the type of minutes that they play in a match,” Meharg said.

[Maryland field hockey has excelled in overtime since Princeton loss]

The coach often looks at heart rate to examine players’ anxiety on the field. When it rises but other data points don’t align, Meharg knows they need to rest and reset.

“We can tell if they’re really anxious,” Meharg said. “Heart rate goes up and they’re not really moving … then you can tell we’ve got an anxiety issue going on.”

Meharg personally appreciates breaking the numbers down by quarter, another feature of the Vectors. She emphasizes maintaining the same energy levels throughout the game and the devices can show her if that’s being achieved.

Cara Rapoport, one of the team’s athletic trainers who also works with Maryland football and men’s soccer trainers, manages the data as it is sent to her during games and gets it to Meharg for her to make the final decision on a player.

However, she stays out of Meharg’s way during most of the game unless a player’s numbers are reaching alarming levels.

Rest has different meanings for each position. Meharg tries to get midfielders, who are typically more active than forwards and defenders, in and out of games on two-minute cycles while forwards are changed every five to six minutes.

Rapoport helps Meharg create weekly personalized training programs for players. The coach sends her plans for the week to Rapoport, who then tweaks them based on data from recent practices and games.

The Vectors also help Maryland integrate players back to game speed as they work their way back from injury.

[No. 4 Maryland field hockey defeats No. 2 Northwestern in overtime, 2-1]

Riley Donnelly, a graduate student who returned for her fifth season, has dealt with knee and hip injuries dating back to last season. She missed three of the Terps’ first nine games and didn’t make her first start of the season until game No. 10.

Verleg had a similar experience. She played a stretch of games earlier this season where her trackable data exceeded levels Meharg and the trainers were comfortable with. To counter that, they rested the defender more than normal against Michigan State.

“When someone’s injured or when you have health problems for a while, they always look at your numbers, and they will definitely get you out of the game if you need to,” Verleg said. “I talked to [Rapaport] last game and they took me out for a while just to get some more rest because my numbers were pretty high the last few weeks.”

The devices were introduced to Maryland a decade ago. Meharg experimented with three different companies before finally settling on Catapult, which she called the best.

Although Verleg said she’s never used Catapult or a similar device outside of Maryland, GPS trackers are common across college and international field hockey.

“It’s done all over the world at the highest level,” Meharg said. “This game … you’ve got to run the entire time, and you really need to give your players the right breaks.”

The innovation hasn’t come without its downsides.

Meharg admits there’s been times where players pushed back to being taken out when their numbers reached high levels. The devices also forced her to alter her coaching style, one she describes as “very hands on.”

The first 25 years of her coaching career are different than what the last 10 have been with the tracking data. Instead of making decisions based on what she’s seeing and gut feel, in-depth statistics often help make crucial decisions.

Taking decision-making responsibilities out of the veteran coach’s hands has been an adjustment, but one Meharg has approached with an open mind. She recognizes the health advantages the new strategy provides and how it outweighs any of her gripes.

“That’s why these players can make it 13 weeks and play up to 25 matches,” Meharg said. “It’s these numbers.”