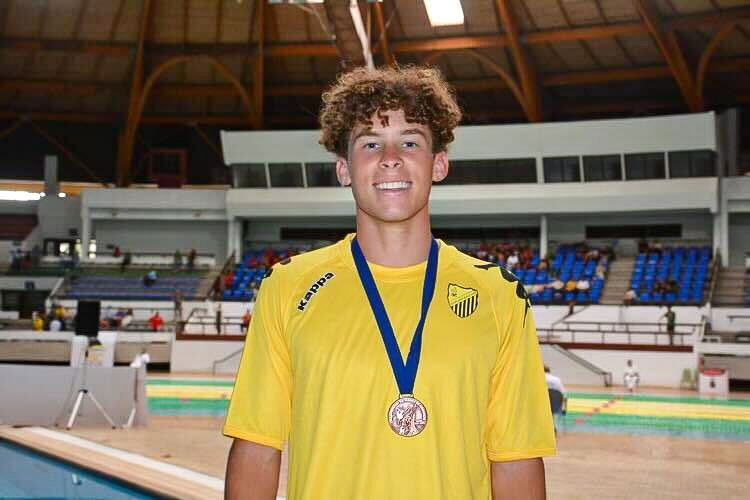 By Alexa Atlas
For The Diamondback

When Karim Elkassem was called up for his first event at the Moroccan Swimming Championships over the summer, he looked to the crowd and found his family cheering for him in the stands.

“It was a great feeling knowing they were there to support me,” Elkassem said.

It was his most memorable moment as a swimmer, the sophomore management major said. A member of the University of Maryland’s club swim team, he competed at the Moroccan Swimming Championships in Casablanca in early August.

Despite competing in a field of more than 200 swimmers, Elkassem thrived in the meet. He placed first in the 100-meter backstroke, second in the 100-meter breaststroke and third in the 50-meter freestyle all in the 2003-2004 age group.

“It felt like an amazing experience knowing that I was able to represent my dad’s country swimming for Morocco,” Elkassem said. “It felt super nice seeing all these other kids from Morocco.”

Elkassem began swimming competitively at age eight and as each year passed, his passion for the sport grew, he said.

“As I got older, I realized how much the sport really meant to me, through the people I was with and how much it motivated me to become better in and out of the water,” Elkassem said.

His passion for the sport is evident through his interactions with teammates and coaches.

“He’s such a genuine guy,” Elkassem’s club coach Dave Crocker said. “He was equally as excited for his friends and his teammates when they did well as he was for his own successes. He is just that kind of guy that is always looking out for others.”

Not only did Elkassem influence the other swimmers on his team, but he acted as a role model to his two younger twin brothers — who are also budding swimmers — Nasim and Samir Elkassem. When all three were teenagers, the brothers received the opportunity to swim together.

Throughout this year, Elkassem was able to lead by example and show them what it takes to be a successful swimmer.

“A good bit of [Nasim and Samir’s] current success has a lot to do with what they saw their older brother doing,” Crocker said. (3.30)

Samir Elkassem agreed that having his older brother as a role model has turned him into the swimmer he has become.

“I [have] loved swimming with [Elkassem] throughout my life. Swimming is a really hard and mental sport, so having him with me really helps,” he said.

Although Elkassem enjoyed swimming in high school, he did not want to swim at the Division I or Division III level in college due to the high level of stress the sport gave him. During Elkassem’s junior year of high school, he began the process of talking to college coaches.

As he moved forward with the process, he decided the money and time commitment of swimming at the highest level in college was not worth it to him.

Ultimately, Elkassem decided it was best for him to stay in state while swimming on the club team at Maryland. This allowed Elkassem to do what he loved with no stress. He said he loves swimming “at the more fun lower level.”

In addition to swimming on the club team, Elkassem simultaneously worked hard to train for the Moroccan National Swimming Championship — a swim meet that takes place in Morocco every summer.

During the school year, Elkassem was able to stay in shape for the championship by attending practices for this university’s club team.

In addition to practicing during the school year, Elkassem swam with his old club team, Rockville Montgomery Swim Club, three to four days a week over the summer. Elkassem’s drive throughout the year allowed him to reach a substantial level of success.

“Karim was always determined as an athlete and a student. And being an attentive listener and good learner, he was easy to coach, [which allowed him to become] a better athlete technically and physically,” Mehdi Elkassem said.

The work Elkassem put forth is what empowered him to successfully compete at the Moroccan championship. So when Elkassem touched first in the 100-meter backstroke, his coach wasn’t shocked.

“I am not surprised that Elkassem found success because of his motivation to always push himself,” Crocker said.

Not only was Crocker thrilled with Elkassem’s performance, but Elkassem was pleased himself.

By sharing the experience with his brothers, the Elkassem family was able to bond over their love for the sport of swimming. The family’s goal is to garner the same experience again next summer.

“I hope to continue doing swim club and training hard enough so I can go back to the Morocco Nationals in the summer [2023],” Elkassem said.