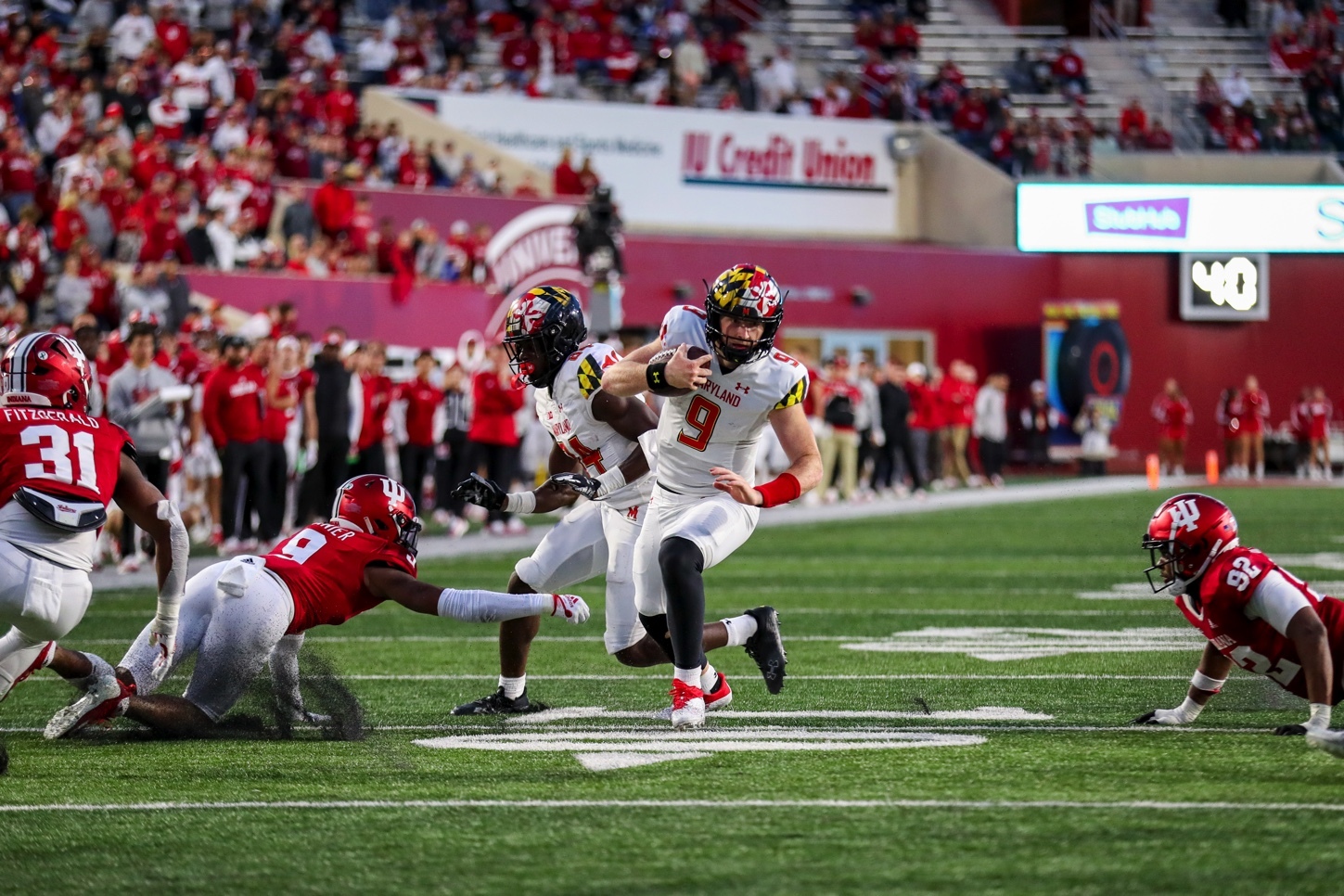 Billy Edwards Jr. hated the reason he came into the game Saturday afternoon.

So did Maryland football fans, who saw Taulia Tagovailoa carted off the field with what head coach Mike Locksley called a lower leg injury.

The doomsday scenario unfolded with the Terps down three in the fourth quarter, as Maryland fans across the nation looked on in dismay.

But when Edwards entered the huddle in relief of the injured Tagovailoa, he only heard encouragement from his teammates.

The backup validated that trust, aiding a run game that powered the visiting Terps to two late touchdowns that sealed a 38-33 win.

Edwards didn’t need to complete a pass. Instead, he and Roman Hemby powered the Terps down the field with their legs. The duo combined for 114 yards on the two scoring drives that gave Maryland an 11-point lead that it would let shrink, but never relinquish.

Coming into the game, the transfer from Wake Forest had barely played this season other than brief mop-up duty in games against Charlotte and Michigan. His first drive against the Hoosiers featured back-to-back incompletions, but Edwards said he eased into the game from there.

He told himself not to make the game bigger than it was and instead focus on doing what he needed to do, he said.

Maryland’s coaching staff prepared him for the moment, giving him around 40 percent of the practice reps each week, Locksley said. Edwards said he tries to prepare like Tagovailoa during a week of practice to keep himself ready for any potential opportunity.

“We have tremendous faith in Billy and his ability to come in and execute,” Locksley said. “It’s a next-man-up mentality and I was really glad to see Billy come in and do what he did.”

Defensive coordinator Brian Williams implored his defense to give the offense enough chances to win the game, cornerback Tarheeb Still said postgame. The unit did that, forcing a quick punt to give Edwards another chance.

The coaching staff adjusted after that first drive. Instead of asking Edwards to throw as they did on those first three plays, they pounded the ball against the Hoosier defense. Six of the seven called plays were runs. The only pass was an incompletion that led to an Indiana unsportsmanlike penalty.

Locksley said that they identified Indiana’s “flavor of the day” at halftime and made necessary adjustments to exploit the Hoosier blitzes and “pop” some runs.

Five of those rushes went to Hemby. But the biggest gain came when Edwards kept the ball during a zone read on third and two, scooting between two defenders for a 31-yard pickup that got the Terps to Indiana’s three-yard line.

Hemby, who finished with 107 yards, scored his lone touchdown of the game two plays later. On the next drive, he broke free for 68 yards, setting up Edwards to dive forward on a designed quarterback run for a three-yard score.

“Our offensive line was blocking phenomenal, the only reason I had the runs I had was because they were keying in on … whoever was [the] running back in the game,” Edwards said. “Obviously I saw green grass on a couple of those and I was able to pull it and kind of make something happen out of it.”

That drive proved pivotal, as Indiana mounted a quick scoring drive to cut the deficit to just one score. Before it started, Edwards turned to his teammates and reiterated his internal message.

“You work throughout the week, Monday through Friday to prepare for your moment and you kind of got to fall back to your training,” Edwards added. “Whether you’re playing in the stadium with no people or 50,000, whatever it is, you kind of can’t make it bigger than it is.”