‘Only rain down the drain’: UMD students paint drains to prevent pollution 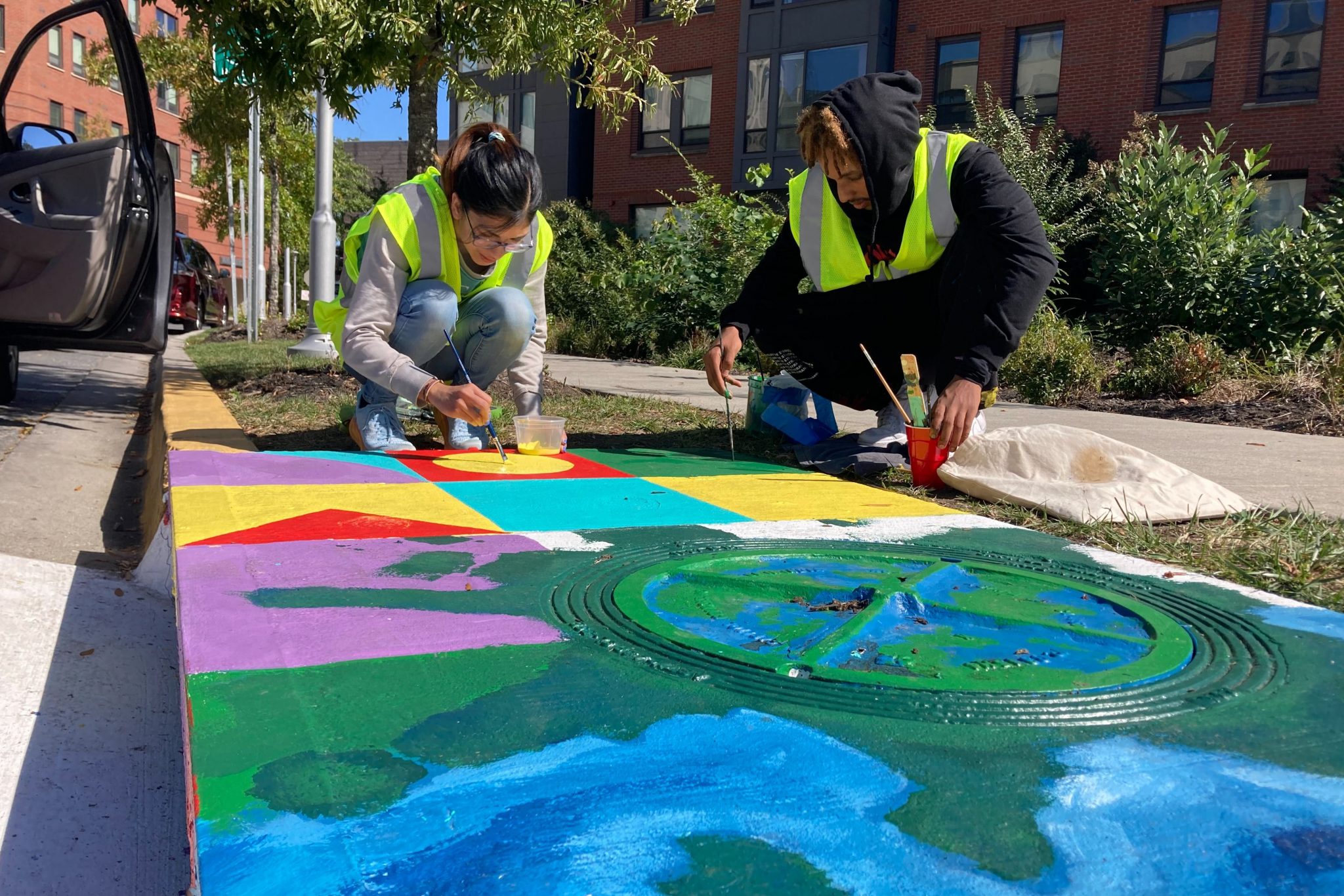 By Rachel McCrea
For the Diamondback

Draped in bright yellow vests near the clattering construction of Terrapin Row, the students could be mistaken for construction workers at first glance. But a closer look reveals they’re actually artists using their talents to build a healthier watershed.

Local artists, including students from the University of Maryland, are working with the city of College Park and the College Park Arts Exchange to paint storm drains around the city. Each mural will have the slogan “Only Rain Down the Drain” to remind residents to keep pollutants out of local waterways.

Duran is a student in professor Brandon Donahue’s art and community class, which is working with the city. Currently, 10 students are painting five drains at intersections near the apartment complex, while four murals in other parts of College Park have already been completed by independent artists.

The project is spearheaded by College Park’s better environment committee.

“We wanted to highlight not just chemicals that get dumped, but more so the trash that can get into the river,” said Caroline Wick, a College Park resident and committee member.

Though she could not speak on behalf of the committee, Wick said they were inspired by similar projects in Washington, D.C., and other local jurisdictions. They are hoping to paint more storm drains in the spring to continue raising awareness.

The nonprofit organization worked with the city to find artists and is supervising the project. They also hosted a critique session for Donahue’s students so they could get feedback on their planned murals.

“It does make a change in our total community consciousness,” Sites said. “When we see that people have taken the time and spent the energy and the resources on decorating the storm drains, that shows us that our friends and neighbors are dedicated to taking care of the environment.”

While water quality specialist Masaya Maeda approves of the city’s use of the “Only Rain Down the Drain” slogan, he believes they could be more specific. He suggested that stenciling instructions against trash, oil, and car washing on the drains could improve the effectiveness of the messaging.

Stormwater runoff is one of the largest concerns on the Anacostia watershed, said Maeda, who works at the Anacostia Watershed Society. Most drains are directly connected to local streams and waterways, so any chemicals on the streets get swept into the Anacostia when it rains.

Though the Anacostia’s health has improved during Maeda’s 20 years on the watershed, he described runoff as an “increasing concern” for the nonprofit.

Large buildings are required to have green infrastructure to manage runoff, but it’s hard to incorporate that on individual properties. Instead, AWS is focusing on educating residents about their watershed.

Senior art major Beniyam Berhanu is creating a mural that blends geometric shapes with images of flowing water. Berhanu and Duran plan to paint a QR code on the drain that links to more information about pollution on the Anacostia River.

Both Duran and Berhanu believe a concerted community push is needed for large-scale change. They view their art as an important component in a larger solution.

“Art is culture, art is community, art is integration. People can connect to it,” Berhanu said. “Even just being able to spread awareness, we are playing the part.”

The two are passionate about art as activism, especially as the consequences of climate change loom larger. Their work was interrupted last weekend by rain, the remnants of Hurricane Ian’s battering of Florida.

“I always hope … I can show people through painting on the floor, so simply, that we need to protect this life,” Duran said.