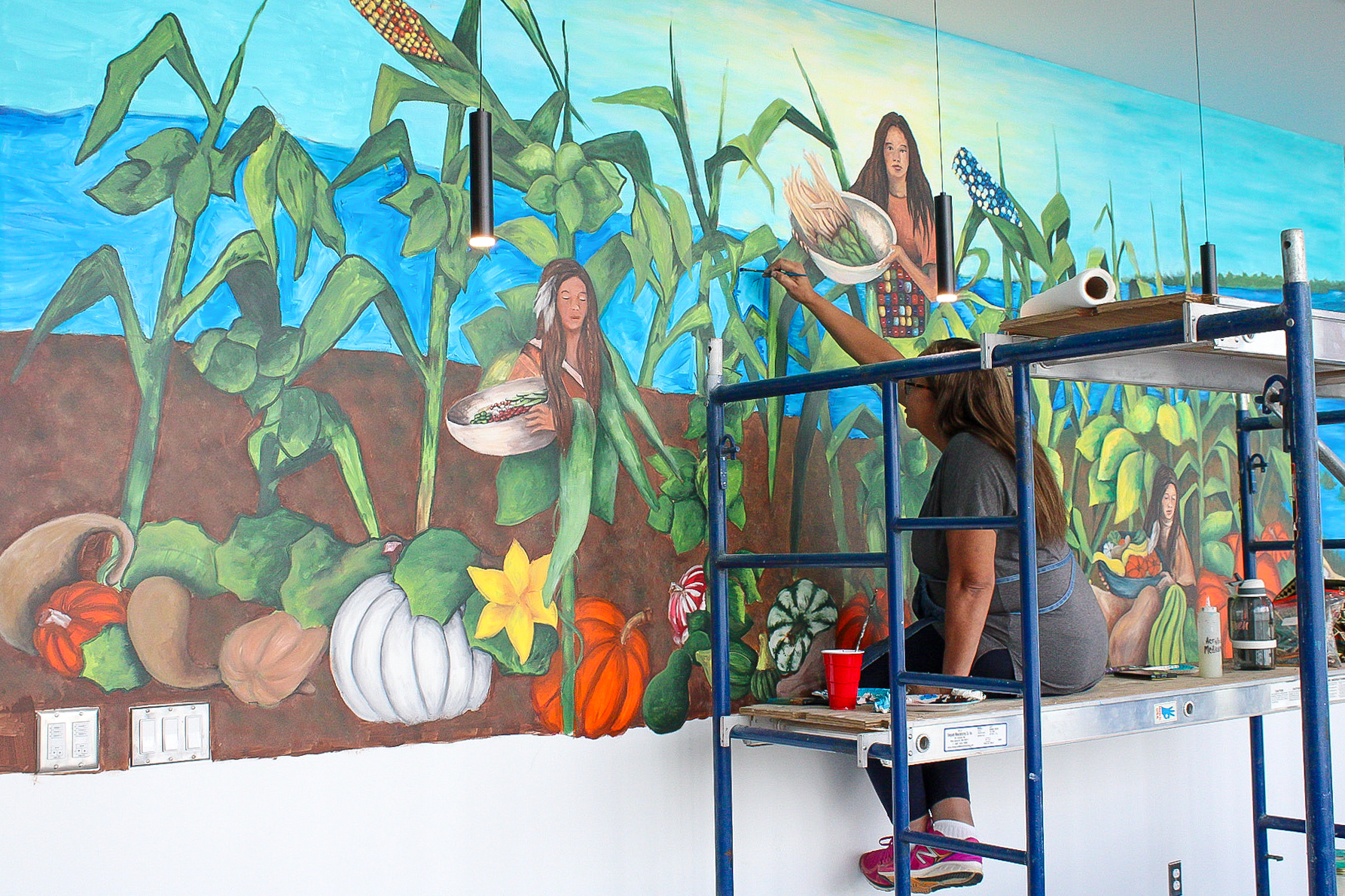 Students and dining hall employees have been sneaking glances of the greens, blues and yellows of a new mural at the University of Maryland’s Yahentamitsi dining hall last week.

After talking through ideas with the Piscataway Tribe, whose ancestral land this university was built on, Karen Lynch Harley, an artist from the Haliwa-Saponi Tribe in North Carolina, painted a mural of the three sisters: corn, beans and squash with a woman coming out of each crop.

Yahentamitsi translates to “a place to go eat.” The dining hall’s name aligns with traditional Piscataway values, which ensure food is shared equally and speaks to the process of a community gathering to eat, Lynch Harley said in a Facebook post.

“Corn, bean and squash were put on this Earth to sustain people … throughout the season,” Lynch Harley, an alum from this university, said.

The cornstalk is painted in the middle of the new mural with beans to the left and squash to the right. Vines of the beans will grow up the corn stalk, Lynch Harley said. Beans contain nitrogen, which helps feed the corn and the squash. The squash grows at the bottom around the beans and corn to keep the ground shaded.

“My favorite is the corn woman,” Lynch Harley said. “She’s the tallest and everything, but I just really enjoyed doing her, and she stands out the most to me. Not that she would have more meaning than the other two, but it’s the corn … [that] makes everything else work.”

Lynch Harley has painted parts of murals and the three sisters before, but this is the first time she has shown the whole garden. Although Lynch Harley began her professional artist career in 1989, she only started painting full-scale murals four years ago.

The art in Yahentamitsi dining hall tells the story of the Piscataway people through their voice and vision, Cara Fleck, strategic communications and marketing director at the university, said in an email.

Once the university decided what to name the dining hall, staff worked with Piscataway elders and the design team at Ayers Saint Gross, a design firm that creates places for shared knowledge and culture, to design it.

The Piscataway elders recommended Harley for some of the artwork, Fleck said.

Shad fish represent a food source for the Piscataway people, and the seven grandfathers are wisdom, respect, humility, love, bravery, honesty and reciprocity, according to Lynch Harley.

Having the Piscataway name on a building at a major university is a big step in the right direction, Lynch Harley said.

“I don’t want people just to come in and say, ‘Oh, that’s a pretty picture,’” Lynch Harley said. “I hope they come out with awareness about … the importance of the Native Americans in this state and all over, and maybe feel more happy and proud that they have Native people that were here and are still here.”