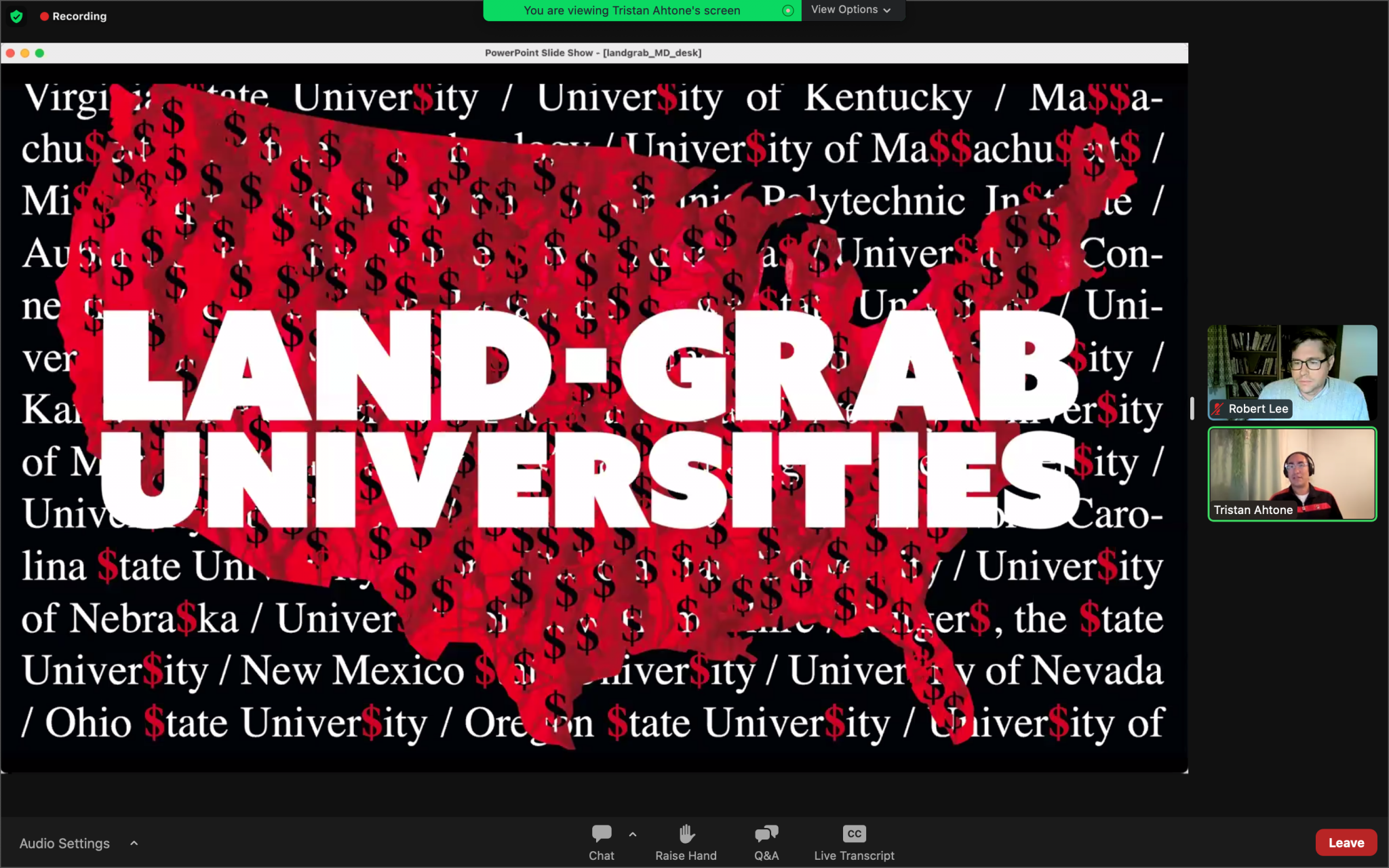 Tristan Ahtone and Robert Lee, colleagues in research work about Indigenous land and the colonial approach to claim this land and use it to found land-grant institutions, present their findings in a webinar on Sept. 28, 2022. (Jordyn Salow/The Diamondback)

The University of Maryland’s Office of Diversity and Inclusion and the entomology department hosted a webinar Wednesday exploring the relationship between colonialism and higher education.

The webinar was centered around “Land-Grab Universities” — a project detailing sections of indigenous tribal land the United States government had stolen to fund land-grant universities, including this university.

The project, led by Robert Lee, a University of Cambridge assistant history professor, and Tristan Ahtone, editor-at-large of environmental news nonprofit Grist, is published on LandGrabU.org.

“The project that we developed was really a disciplinary hybrid that tried to combine historical research, spatial analysis and investigative journalism, and to bundle them into a multimedia report,” Lee said.

Land-Grab Universities was designed to address the “living legacy of colonialism and genocide” foundational to establishing land grant universities.

Lee said government land acquisition policies have roots in Ireland. The practice was later adopted by colonists in Jamestown, Virginia, before spreading across the U.S.

The Morrill Act of 1862 created widespread land acquisition by turning tribal land into “seed money” for 52 universities, he said.

Ahtone and Lee also shared data specifically about this university.

In 1867, the university sold that land in blocks in exchange for an endowment totaling $112,504 — nearly nine times the amount originally paid to Indigenous tribes for the land.

The researchers found 10 percent of the “capital of land grant’s capital was illegally used to reimburse the state for covering university debts.” The state legislature restored the funding in 1872.

As part of a system where states bought and sold land among each other to try and get the best price, this university also received parcels from multiple other states, including Michigan and California.

This university is located on the land of the Piscataway people. The university released a land acknowledgment on Sept. 15 to recognize the history of the space it occupies.

“Every community owes its existence and strength to the generations before them, around the world, who contributed their hopes, dreams, and energy into making the history that led to this moment,” the statement read.

Another, more in-depth acknowledgment was shared at the start of the webinar.

Lee said the data compiled through Land-Grab Universities could go toward a more robust land acknowledgment.

Ahtone said making the project data publicly available was key for having the public hold the research team accountable and starting their own research.

“Making sure that this is open source for folks, we really hope that’s where a lot of that creative thinking comes in … applying ideas that we never thought about,” Ahtone said.