‘Nature will come back’: Jane Goodall speaks at UMD about environmental conservation 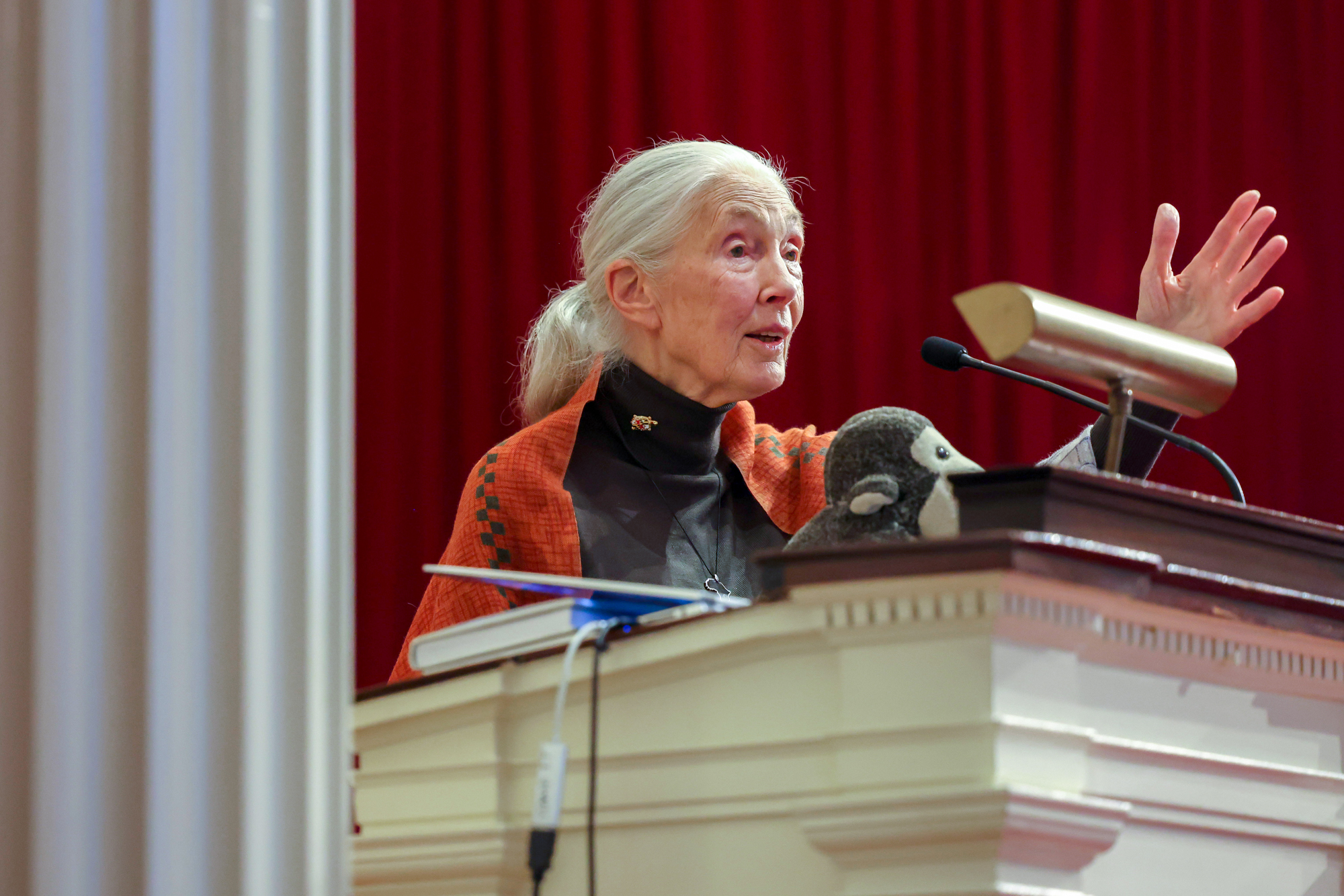 World-famous ethologist and activist Dr. Jane Goodall spoke at the University of Maryland on Wednesday about environmental conservation, her life story and hope for the future.

“Saving the environment isn’t just for wildlife,” she said. “But also for [our] own future.”

Goodall is one of the world’s leading expert on chimpanzees and is well known for her 60-year study in Gombe Stream National Park, Tanzania, where she made observations about chimpanzees’ human-like behavior, changing the way scientists viewed both humans and animals.

She is also an activist for fair treatment of animals and environmental conservation. She was named a UN Messenger of Peace in 2002 and is an honorary member of the World Future Council.

Goodall is currently touring the U.S. and has talked to hundreds of universities over the years.

“The world is a right mess and people in university are about to go out into the big wide world. Talking to them and helping them understand what they can do to make a difference is very important,” she said.

Goodall began her talk with her childhood, outlining a love of animals that existed for as long as she can remember. She described bringing earth worms into her bed, hiding out in chicken coops and a mother who wholeheartedly supported her passion.

Goodall, who couldn’t afford an undergraduate degree, learned through reading books, observing animals outside and listening to knowledgeable adults. Especially interested in the animals in Africa, Goodall moved back in with her parents as an adult to save up the money to go to Kenya.

While there, she was introduced to Kenyan archaeologist and paleontologist Louis Leakey. Having impressed him with her knowledge of African animals, he hired her to be his secretary.

After inviting her on several excursions, Leakey told Goodall she was the person he’d been looking for.

Goodall was then chosen to observe chimpanzees in Gombe Stream National Park, Tanzania, and the rest is history. It was there that she made observations that changed science forever and pushed her to notoriety.

“It’s sort of inspiring to hear how simple her story is,” said physics doctoral student Deniz Kurdak. “It … feels important for other people who want to make change happen, but don’t really believe that they have the opportunity to do so.”

Since changing the scientific world, Goodall has continued to make her impact. Her most recent book, Local Voices, Local Choices: The Tacare Approach to Community-Led Conservation showcases the TACARE approach Goodall and her team use.

Goodall believes change comes from working with people, not against them. So, Goodall launched the community-centered conservation and development program TACARE, or “Take Care,” in 1994.

“It’s about ensuring that people feel that they own and they drive decisions [in their community],” said Lilian Pintea, the conservation science vice president at the Jane Goodall Institute.

Pintea presented an example of the change this approach has been able to bring, showcasing a village in Tanzania. In 2005, the area was nearly completely eroded.

Today, the forest there has regrown significantly. Pintea said he and his team only achieved this by working with local communities.

In light of the change the Jane Goodall Institute has been able to create, Goodall ended her talk with reasons for hope.

The village in Tanzania exemplified several of her reasons to hold on to hope despite this.

Goodall highlighted both scientific and individual advancements and the resilience of nature as reasons for hope. More scientists are developing projects such as renewable energy while more people are considering things such as their environmental footprint.

“Give it time and some help; nature will come back,” she said.

Goodall’s hope for the future was also strengthened by the extraordinary minds of people. She stressed the huge potential of humanity, especially when their minds work in harmony with their hearts.

Alongside this, Goodall discussed the indomitable spirit of humans. Goodall cited immigrants, those with physical disabilities and people who have and are living through wars as examples.

“It is such a dark world,” said junior cell biology and genetics major Julia Streit. “What she sees in the world still at her age, and the hope she still has, brings me hope for our world.”

Goodall said that since 1991, young people have been coming up to her and expressing hopelessness for their future and that of the environment. It’s these young people that are Goodall’s biggest reason for hope.

In 1991, Goodall established Roots & Shoots. The youth action program gives young people the power and resources to enact positive change in their communities. This is often in the form of group projects that focus on helping the environment, animals and people.

Goodall hopes this university will establish its own chapter.

Goodall ended on the power everyone has to choose to make a difference. She listed a variety of things people can do to impact their environment, whether with a group such as Roots & Shoots or alone.

She said people can eat less meat, plant trees or pick up litter and stressed the variety of ways in which individuals can enact change and better the world.

“Every single day each one of us lives our lives, we can make an impact on the planet,” she said.