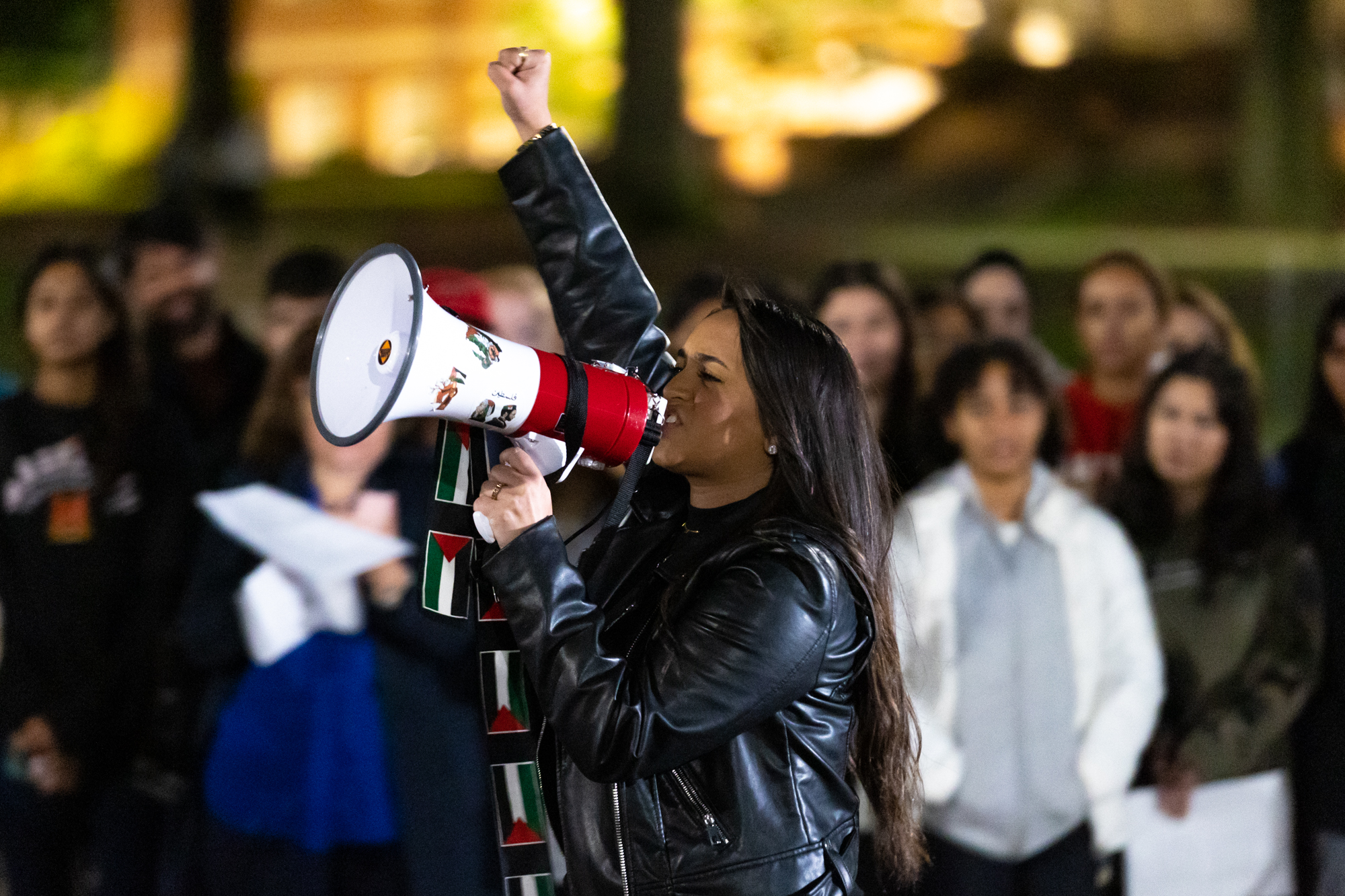 Dozens of University of Maryland students and community members gather at McKeldin Mall for a rally to protest actions taken by the Iranian government on Oct. 5, 2022 . (Cam Andrews/The Diamondback)

Dozens of University of Maryland students and community members gathered at McKeldin Mall Wednesday to protest the Iranian government’s actions.

“As the Iranian diaspora, we feel responsible to support them in any way possible,” she said.

The crowd gathered at the base of the fountain on McKeldin Mall to mourn the death of Amini and those in Iran who have died while protesting.

Multiple speakers addressed the protestors in Farsi, and the crowd sang protest songs in Farsi and English.

Siamak Aram, an associate professor at Harrisburg University, read an open letter written by his colleagues at the University of Michigan condemning the violence against university students protesting in Iran. Representatives from universities including the University of Southern California and the Massachusetts Institute of Technology signed the letter, Aram said.

Thousands of Iranians — many of whom are women and young adults — have protested in the streets since Amini’s death. Iranian police officers arrested and had allegedly beaten Amini in Tehran, Iran, for not wearing a hijab that conformed to government laws in public. She soon fell into a coma and died three days later in a hospital on Sept. 16.

Iran’s government restricted internet usage as the IRGC, a wing of Iran’s military, asked people to identify protestors, according to a report from Iranian news outlet Fars News.

The protests are the culmination of Iranian citizens seeking a democracy while living under an authoritarian government, Morvarid said.

“It’s about 43 years of agony and living under a regime that is so brutal,” she said.

Holding more protests and getting universities to support the mission has an impact, Aram said. The issue goes beyond Iran.

“This is not [just] about the Iranian students, attacking a university in one part of the world is like attacking all of us,” the professor said.

The crowd ended the protest with chants in Farsi and English including, “no justice, no peace,” and, “women, life, freedom.”

Activist Mariam Afshar, who led many of the chants, said she was happy with the turnout and disturbed by the actions of the Iranian government.

“When you have a government against the future of their own country, it’s a very sad and disturbing thing,” Afshar said. “It’s such a low act of inhumanity.”

Senior family science major Tara Nazari said the most important thing students can do after the protest is continue to spread awareness, especially to those who are not aware of the situation.

“This problem isn’t going away, this issue still persists,” Nazari said. “There’s people dying and killed, getting their rights taken every single day in Iran.”