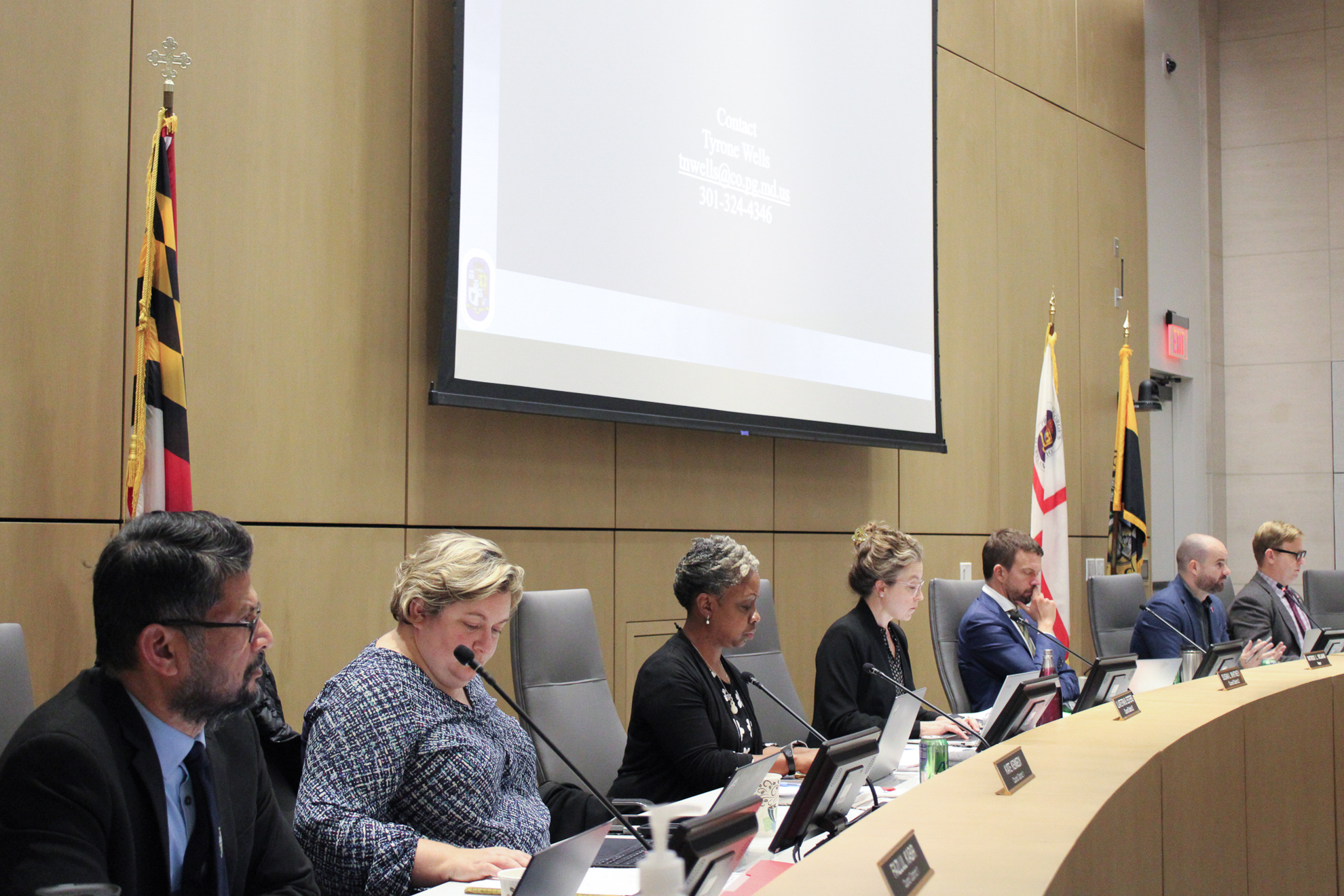 Members of the College Park City Council during a council meeting on Oct. 11, 2022. (Giuseppe LoPiccolo/The Diamondback)

The City of College Park’s redistricting commission reluctantly drafted three new redistricting maps, after the College Park City Council made it clear it wanted to maintain the current districts as much as possible.

The council voted to lower restrictions on the threshold of voter population between new districts Tuesday. Previously, district populations could vary by up to five percent. Now, they can vary by up to 7.5 percent.

The new maps add to a multitude of existing options for city redistricting, including six maps originally made by the commission, the three new maps from the commission and the maps made by a consulting firm. The council can vote to pass any of the maps presented so far in the redistricting process.

The modified maps are drawn using 2023 population estimates. This estimate is made from adding the 2020 census count and the population of new housing projects that will be ready by 2023.

The redistricting commission preferred the three original maps based off of the 2023 population data because the original maps were more equitable among districts and were closer to their original charge, according to assistant city manager Bill Gardiner.

“The commission even overwhelmingly did not prefer these maps to the ones that had been created previously,” said Valerie Graham, a redistricting commission member and the student liaison to the council.

Graham said the commission was focusing more on making the numbers equal across districts but after the council gave comments, the focus switched. The council prioritized keeping current districts together as much as possible.

D.W. Rowlands, who is a vice chair of the redistricting commission and is in charge of the commission’s geographic software, draws the maps the commission releases. To draw the maps in the way the council requested, Rowlands had to draw unconventional lines.

One map split an apartment building, the University View, into two separate districts, according to Rowlands. The second map attached District 4 together with a small strip of land behind The Nine apartments.
“One might reasonably question the reasonableness of using an essentially gerrymandering technique of a strip of land a couple feet wide to connect two parts of a district,” Rowlands said.

Another map switches the dorms on the campus between districts. Most of the maps have the student dorms split in some ways between Districts 4 and 3, but this map places North Campus dorms in District 2.

Rowlands thinks the council views areas with single-family homes as the core of districts, which are supposed to be kept together, and not areas with student apartments and other living situations.

District 3 council member John Rigg said the council needed to stay clear of picking its voters during an Oct. 5 work session, when the maps were discussed. Rigg referred to the recent Prince George’s County redistricting when the council sent a letter strictly against county officials making changes to county redistricting maps.

District 3 council member Stuart Adams argued the council needed to retain “the core” of the original districts as much as possible because many residents voiced their desire to stay in the same district.

“Keep neighborhoods as much as possible in their existing district unless they need to move because of other circumstances,” Adams said.

District 2 council member Llatetra Brown Esters also noted at the Oct. 5 work session that the city has changed since its last attempt at redistricting in 2012. Esters said the council should allow the commission to do their job based on numbers to avoid the risk of making decisions that aren’t beneficial in the long run.

“With growth, there’s going to be change. I know that change is difficult,” Esters said.

Once the independent redistricting commission presents their maps, the council has an opportunity to request changes to the maps. After these changes are made, the council votes on the final map.

Rowlands made it clear the redistricting commission will not make any new maps. If the council needs additional changes to the maps, she said, they can have city staff or a consultant draw additional options.

The council has to decide on the final redistricting map by the end of this year to leave enough time to prepare for the November 2023 city elections. The last council meeting of the year is Dec. 13.

“It’s been great in some ways and incredibly disheartening in others,” Graham said. “I feel like there’s a lot of passionate opinions on every side and definitely things got heated but I’m certainly glad that in the next few months, a map will be chosen and implemented.”