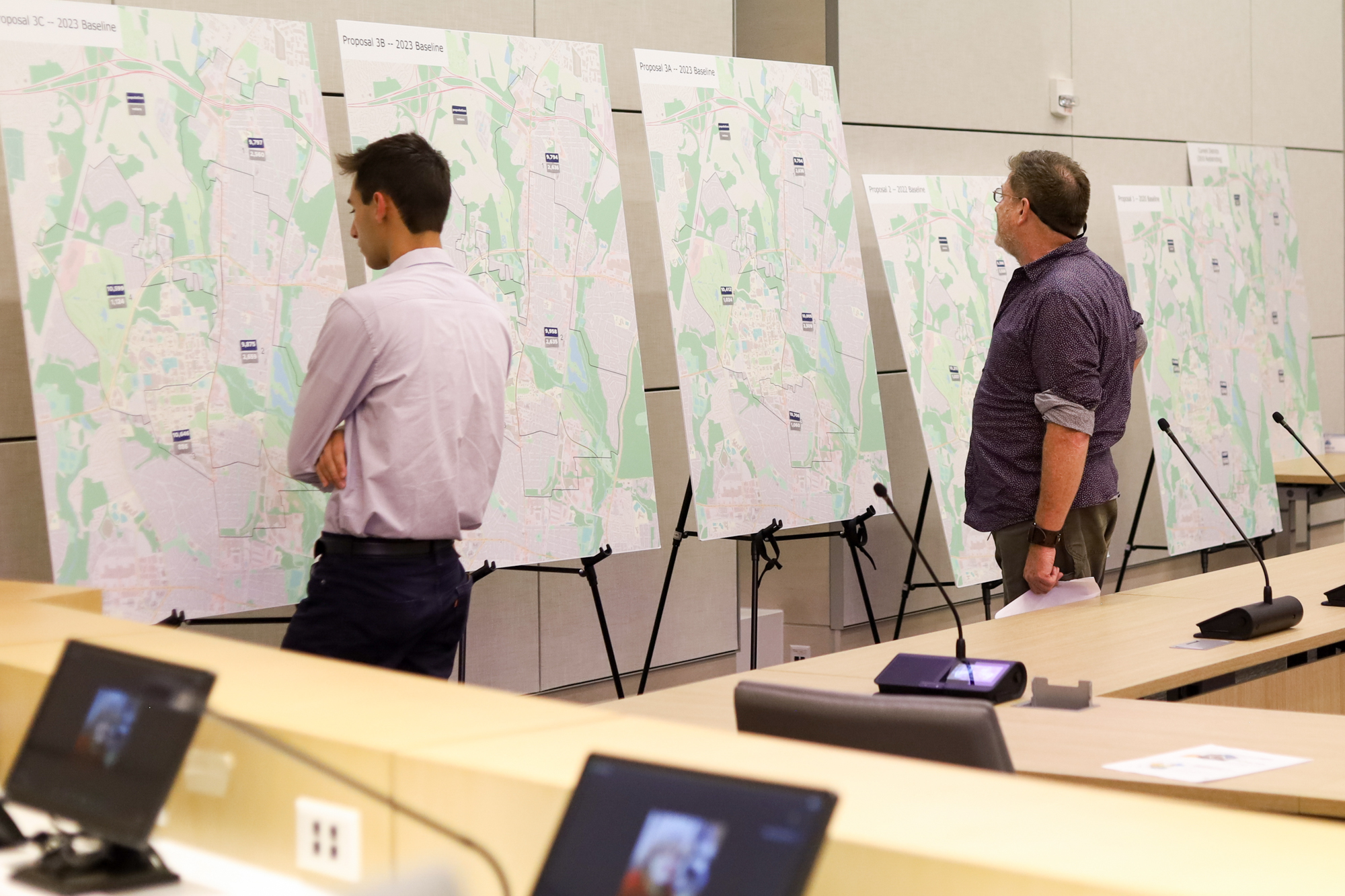 The Redistricting Commission holds a meeting to review several redistricting proposals for the city of College Park on Sept. 12, 2022. (Riley Sims/The Diamondback)

Some College Park residents are concerned their voices might lose power due to newly proposed redistricting maps that would keep the University of Maryland student population more concentrated in city districts.

The city’s redistricting commission presented the five redistricting maps at two public hearings, one on Sept. 1 and one on Monday. Major concerns brought up in the meetings include how students would be split up, how student populations would impact voting districts and the separation of neighborhoods in District 3.

The current districts in College Park split areas where mostly students live, such as on campus and in off-campus apartments, into three separate districts. In the new map proposals, students are kept more together, which could give students more voting power in city elections.

At Monday’s meeting, residents and students disagreed on how students should be represented. The two undergraduate student representatives on the city’s redistricting commission supported the proposed maps that mostly keep students in two districts.

[Prince George’s County Democrats focus on abortion access, combating crime ahead of midterms]
“Having a student district where students feel like they can elect a member of the council that is really focused on meeting their needs is important,” commission member and junior government and politics major Valerie Graham said.

Some residents said the students were over-represented by the maps due to their relatively low voter-turnout rates.

“The biggest criteria should be where the voters are,” said David Dorsch, a College Park resident.

Student-majority areas of the city tend to have voting averages of less than 10 percent, likely due to students being registered to vote in their hometowns, according to the commission’s presentation.

Student Government Association members said the student body should have political power even if they don’t vote in city elections.

Robert Day, the chair of the redistricting commission and a former District 3 council member, agrees that the neighborhoods should stay together. Day said the commission worked in multiple sessions to solve this split, but due to development in the southern part of the district, they were only able to pair the two neighborhoods partially together in three of the maps.

James Garnin, a resident of Old Town, said he feels the redistricting maps silence the permanent residents in the neighborhood. He said his little town doesn’t relate to the university.

Unlike many other jurisdictions, the city divides districts based on the sum of actual voters — people who voted in the most recent statewide or city election — as well as total population.

Day said this is done to even out the amount of voters in each district. District 1 currently has around two to three times the number of voters in another district, Day said.

New housing developments since the census and people who weren’t counted in the census can be included in the map estimates. Redistricting commission members can also look at local social and economic interests of an area. Gale Mamatova, the vice president of the North College Park Community Association, says the city has changed a lot since the last redistricting maps that were based on the 2010 census. Mamatova said the new developments in the city are changing the demographics of her neighborhood.

“That makes me really sad, the part of the Hollywood neighborhood I live in is mostly populated by diverse groups of people and older residents and their houses are on sale here all the time. So the demographic is changing,” Mamatova said.

The redistricting commission will present the maps and the public comment from these public hearings during the Sept. 27 council meeting. The council will have final say on the districts.