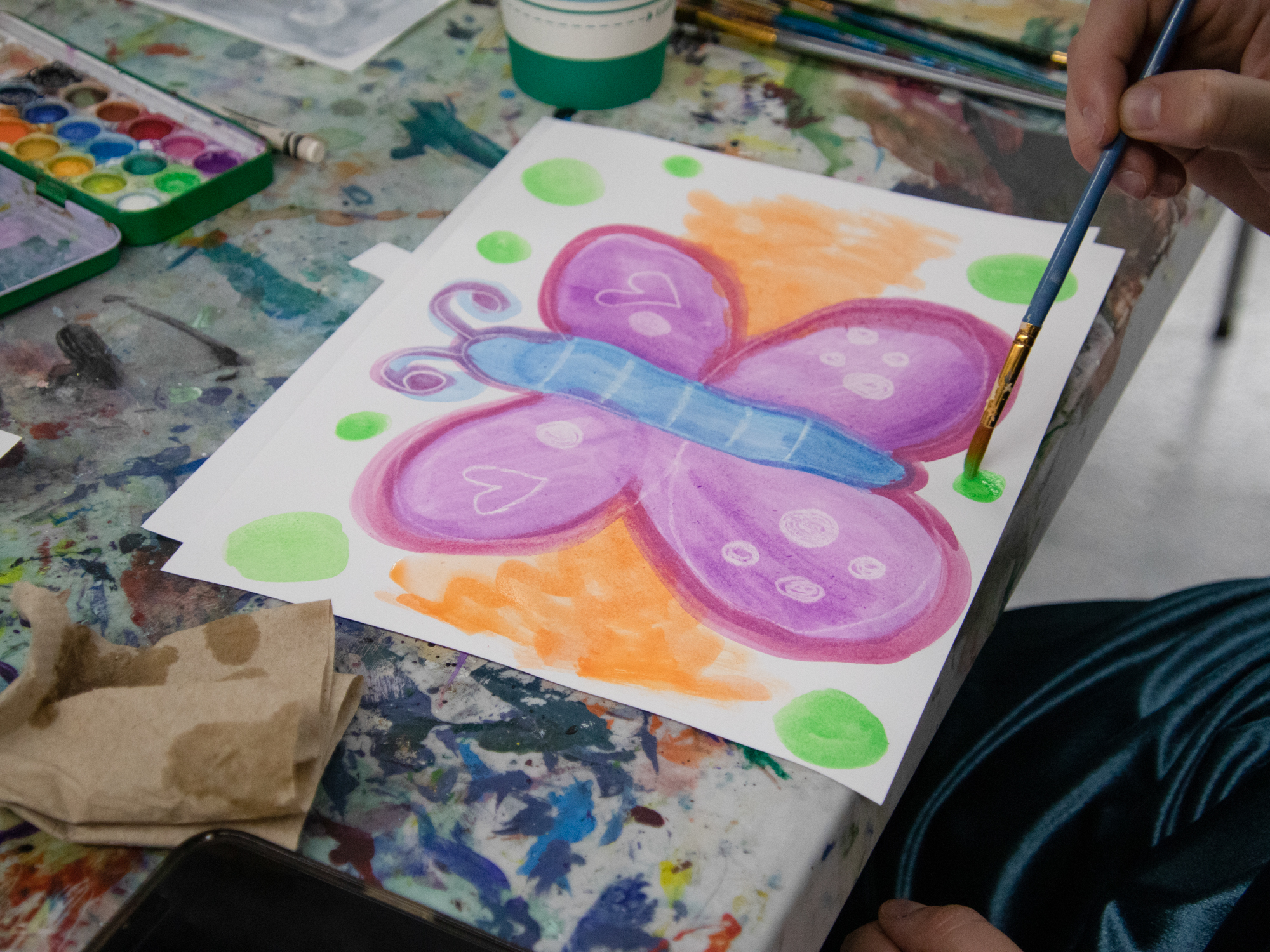 Noor Tofailli, a survivor of a 2020 explosion in Beirut that killed more than 200 people, decided to draw an image of that scene to leave behind in Studio A in Stamp Student Union Thursday.

Tofailli, a first-year graduate student, arrived from Lebanon a couple of months ago, leaving behind her family and friends.

“I don’t feel like I belong here. The culture is different. The people are different,” she said.

The University of Maryland’s Bias Incident Support Services coordinated, along with Studio A and other campus organizations, ‘Community Canvas: Painting to Heal From Injustice,’ as part of mental health awareness week at this university. It aimed to provide a space for marginalized students to create and cope together.

Tofailli doesn’t believe other people are marginalizing her but rather that she makes herself feel that way because of her knowledge of what is happening in her home country.

“Most people who come from different backgrounds read into things differently than an average person does because it’s as simple as you feel guilty sometimes when you’re having fun because you know back home, no one is having…,” Tofailli trailed off as her eyes teared up during the event.

Although she enjoys creating art, Tofailli feels she doesn’t know how to use it to express her emotions. Even though she had a paper to write for a class, she chose to attend the Community Canvas event instead because she needed an outlet for self-care more.

Similarly, Malhar Mandsaurwale, a freshman architecture student, felt the event would give him a creative break from the academic stress of midterms.

Each student who attended had a different story, but the event offered a space where they could all express their emotions and identity through a creative medium.

“Right now, we’re painting on creativity and expression. But if you paint with a purpose and with an end goal of what you want with it, I think that it may be used to strengthen marginalized communities,” Mandsaurwale said. “The fact that it’s targeted to a group means that you’ll meet like-minded people and you can discuss whatever thoughts and ideas you have.”

Brian Medina, one of the event’s planners, said ze hoped students would feel validated in their identities through this communal space. Ze added expressing creativity could be done in more ways than just painting.

“I would hope that they also feel like they can have liberty to share themselves in whatever form. It could be art, it could be writing, it could be dance,” Medina, a program manager of Bias Incident Support Services, said.

The event encouraged students to make two art pieces, one for themselves and one to share for a group collage. The collage helps to represent the many ways healing can be done in support settings and among communities, Medina said.

Tofailli decided to study public policy abroad so that she could utilize her education to improve her country. She was pulled into the event when she saw the word “injustice” in the title. She believes the explosion in Beirut and its aftermath was an example of injustice because people died yet nobody was held accountable.

“As much as I want to leave my emotions in here, I also came to the U.S. to educate people about Lebanon,” Tofailli said. “The mere fact that everyone is going to be leaving something here means that we’re all going through something … this is going to remind everyone that they’re not alone.”