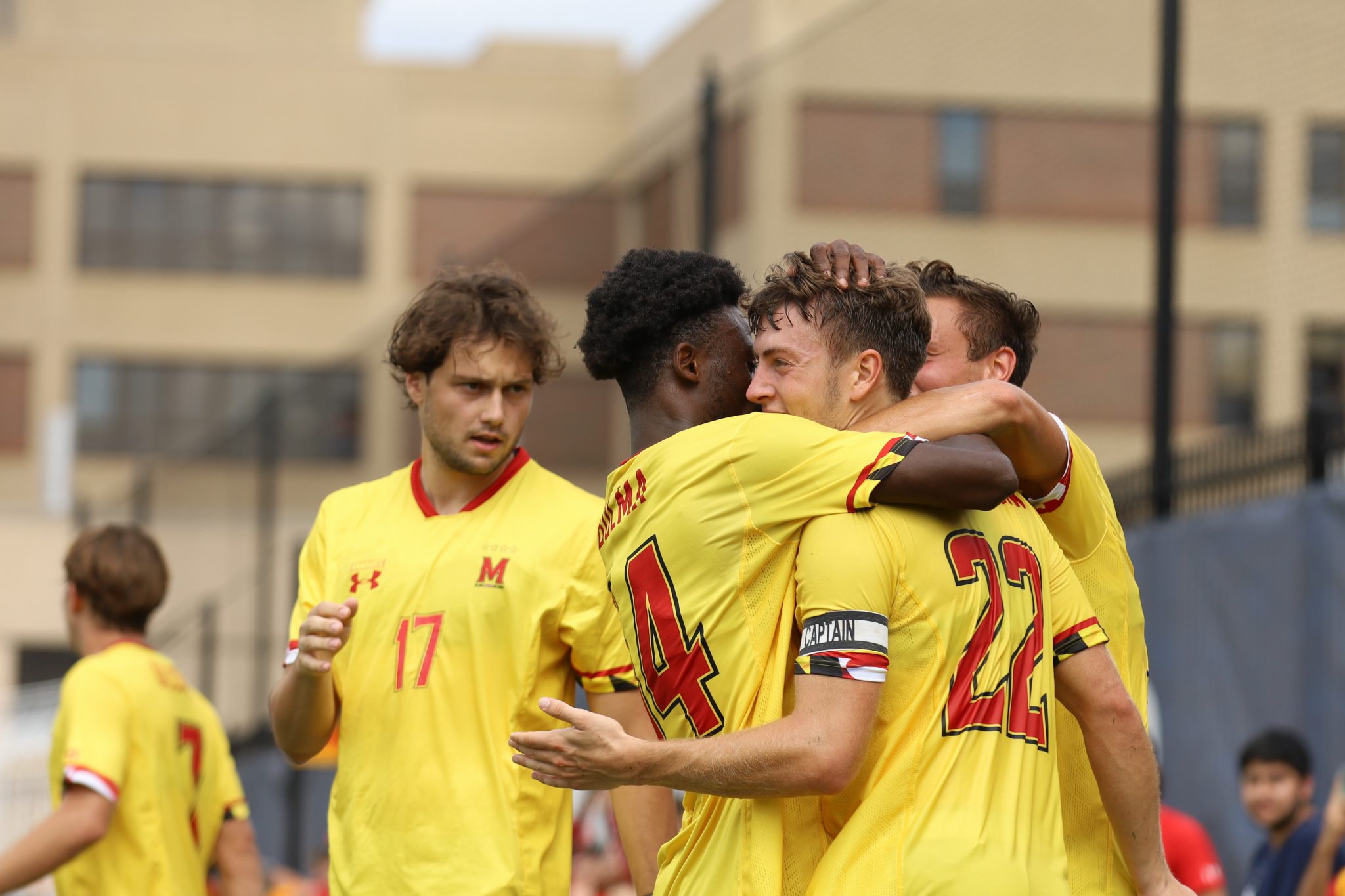 Maryland’s six-game unbeaten run was in danger early in its match against Rutgers after it fell behind by two goals in just 22 minutes.

The Terps huddled to regroup after conceding twice in two minutes. Just over an hour later, they walked off the field victorious.

“We knew it’s going to be tough from here,” Nick Richardson said of Maryland falling behind early. “If we really want to win and win big things we have to come back from this.”

The victory boosts the Terps to the top of the Big Ten table with 10 points, three points clear of the Scarlet Knights. Michigan State also has seven points, but has played one less game than Maryland.

The match was pushed forward to 3:45 p.m. from 7 p.m. due to incoming inclement weather, and moved from Yurcak Field to the Miller Family Soccer Complex.

“We didn’t know we’re going to be kicking off at 3:45 [p.m.] until about 11:45 [a.m.],” coach Sasho Cirovski said. “It was a challenge for both teams, trying to adjust pregame meal and rhythm of preparation, but I thought our guys rose to the challenge.”

Niklas Neumann returned to his role as the Terps’ starting goalkeeper after missing the last four games with a knee injury, making two saves in his first appearance since Sept. 10.

The senior made a crucial save in the 82nd minute to keep out a Pablo Avila shot from close range that maintained Maryland’s lead — one that the Terps looked unlikely to ever hold after falling behind early.

The Scarlet Nights took the lead in the 20th minute through their top scorer, MD Myers. The forward latched on to a through ball from Thomas DeVizio and slotted it into the top corner to notch his eighth goal of the season.

Myers quickly doubled the lead two minutes later after Avila’s strike deflected off the head of the High Point transfer and flew past Neumann.

Hunter George responded for Maryland in the 25th minute as his curling strike from outside the penalty box found the top left corner of the goal to cut Rutgers’ lead in half. The finish was his first since the Terps’ season-opener against New Hampshire on Aug. 25.

Neither team could find the back of the net for the last 20 minutes of the opening half, with the Terps holding a narrow 3-2 shots on target advantage over the Scarlet Knights after 45 minutes. However, Rutgers’ two strikes in just over a two-minute span gave it the advantage at halftime.

Malcolm Johnston equalized for Maryland in the 63rd minute with a bicycle kick. Nick Richardson popped the ball up before Stefan Copetti headed it on to Johnston. The midfielder leapt into the air and met the ball with an overhead kick, driving it into the ground and past Aurie Briscoe.

“[Johnston] has so much talent and sometimes I get frustrated he doesn’t showcase it,” Cirovski said. “I’ve challenged him to really kind of showcase more of his abilities, attacking abilities … he’s really picked up his overall influence in the game over the last four or five games.”

The strike was the midfielder’s first goal from open play this season and his fifth finish total, which leads the team.

Richardson scored himself 11 minutes later, slotting home his third goal in six matches from a Johnston back pass after Briscoe failed to control a George cross to complete the Terps’ turnaround.

“This was a fantastic win by any measure,” coach Sasho Cirovski said. “We played well in the first half and think they scored two goals on two chances … our guys stayed composed.”