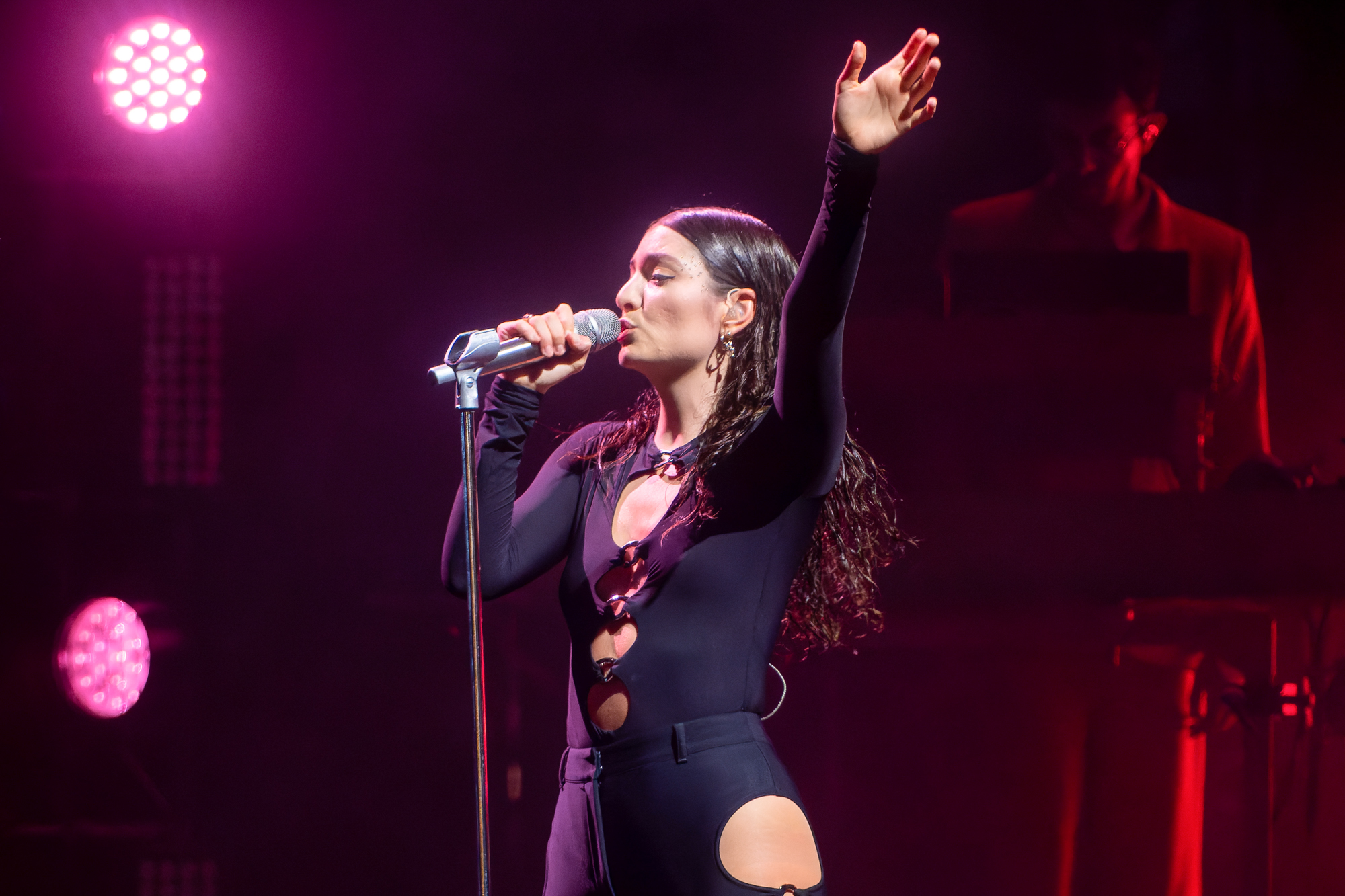 On a rainy, cold Saturday morning, I lined up with fellow attendees to the sold-out music festival All Things Go at the Merriweather Post Pavilion in Columbia, Maryland. With a great line-up from start to close, I was ready for a full day of watching music from some of my favorite artists.

The festival had two stages, the main stage with the overhang amphitheater with seating and a big lawn that extends outside of it. There was another stage behind this, called the Chrysalis stage, which was in a smaller wooded area and had a very unique green scaly overhang with holes in it so that audiences could see the woods behind the stage.

I started my day at the Chrysalis, where I saw Wallice perform. Wallice has a very unique voice that makes her songs — despite sounding edgy — have a soft feel to them. The electric guitar backing made me want to jump around already, and it was only the first set of the day.

It rained on and off all day, but festival goers used umbrellas or pulled blankets over their heads, barely fazed by the weather and continued to dance. Many of the artists I watched pointed this out and thanked the audience for sticking it out, even in the rain.

Later in the day, I stopped by the main stage to see Maude Latour perform. I missed Latour’s performance in August at the University of Maryland, so I was excited to see her live finally. She has an unimaginable amount of confidence, and runs around the stage like the pop star she knows she is. In fact, she moves so much while she sings that I have no idea how she maintains her voice without running out of breath. The crowd was really into it and sang back some of the lyrics of one of her songs.

[Review: Dodie’s ‘Hot Mess’ is everything but one]

After Latour’s set, I quickly headed back to the Chrysalis to see the band Peach Pit. By the time I got there, the smaller area was already packed, and I ended up with a view mostly of a tree. However, I didn’t need to see anything more. Listening to Peach Pit live sounded exactly like their tracks, to an impressive extent. They featured some impressive instrumentals throughout their set, with some pretty nice guitar riffing, and I loved how they head-banged to their music that always seems to emit a chill vibe despite having that rock feel.

I stuck around at this stage to watch Hippo Campus, and was not expecting such a hype set. I didn’t realize before seeing the band live that they have multiple vocalists. Both Jake Luppen and Nathan Stocker play guitar and sing, while Whistler Allen plays drums, Zach Sutton plays bass and DeCarlo Jackson plays trumpet. You can tell the group has a lot of chemistry together, because they rocked out seamlessly during the set and had me bouncing to every song.

The last three sets of the night were organized so I would be able to see them all, and the first up was Mitski. After listening to Mitski’s newest album, I immediately wanted to see her perform her new songs live. Mitski has created a character out of her music, and she emits this persona perfectly on stage. She has beautifully choreographed numbers that have her dramatically bounding across the stage, and she had me entranced at every turn. Mitski also has a powerhouse voice that matches her tracks.

After listening to Mitski’s set, I ran over to the other stage to watch Bleachers. As a fellow New Jerseyan, I love an artist who incorporates their state into their personality. By the end of the set, Jack Antonoff had pulled a fan’s sign up on stage that read “Fuck Yeah New Jersey” for everyone to see. With a big rock band on stage with him, the band jammed out the entire set and ended with two saxophonists playing each other off of the stage.

And to end the night on a perfect note, I fulfilled my life-long dream of seeing Lorde live. She performed music from all three of her albums, and I genuinely had forgotten what a large role her music played in my life growing up. Her calming and charismatic spirit at the end of a long day was exactly what I needed. Hearing her sing “Ribs” live is a moment I will truly never forget.

She even teased the crowd about her swim in the Potomac River she took when she visited Washington, D.C., in August before a concert at The Anthem, an incident that ended up trending on Twitter.

“But it’s kinda cool, I feel like I’m a radioactive creature now,” she told the crowd. “Nothing can kill me.”

The on and off rain and chilly weather didn’t stop me or other festival goers from attending the festival to the very end. All Things Go really lined up a great group of artists that brought fans together on a day not ideal for a music festival, but the rain delivered a new type of energy.

As my first music festival came to an end, I found myself looking up “All Things Go” to see if they had any information on next year’s event yet.