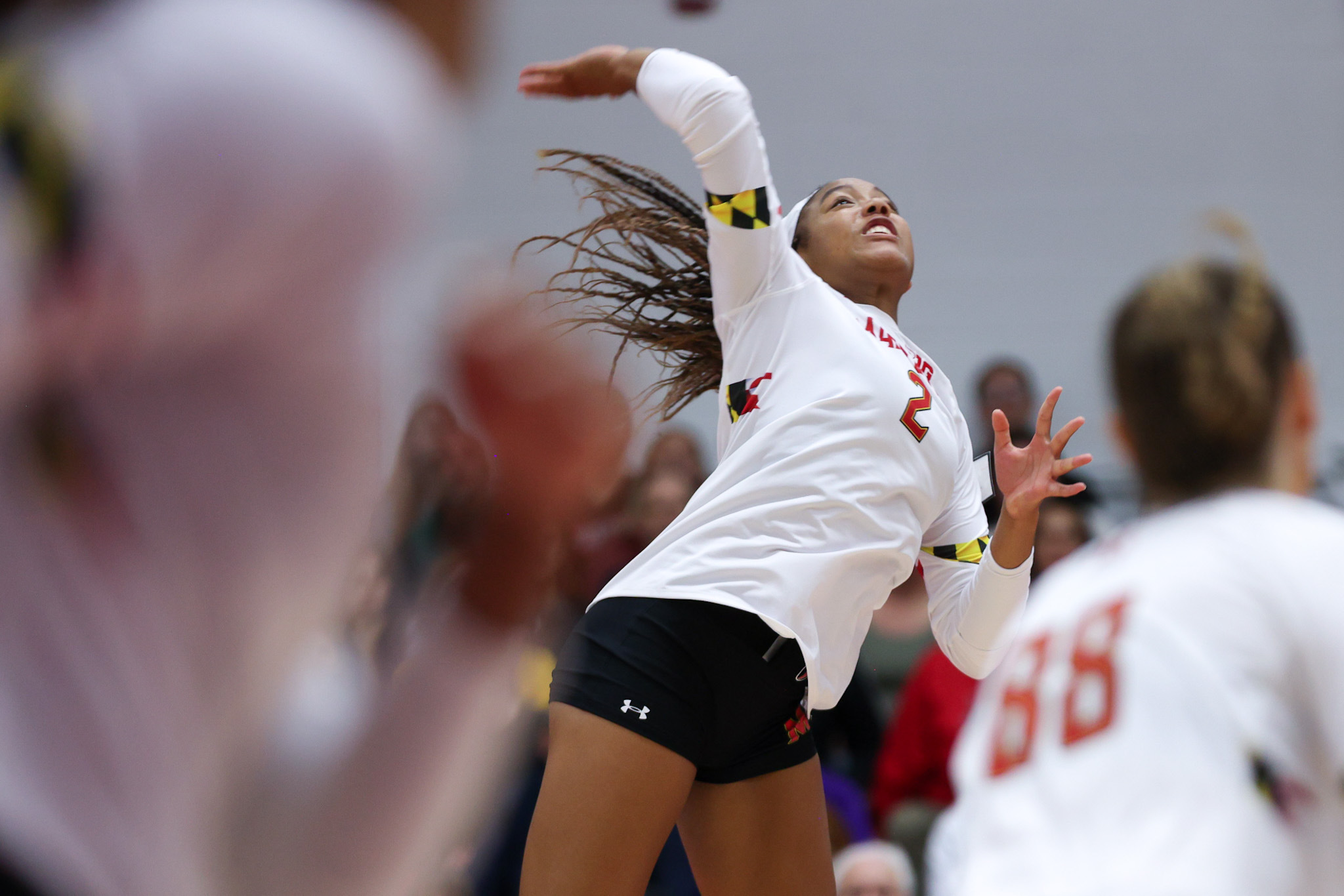 Seizing a match point opportunity, Nebraska’s Whitney Lauenstein and Kaitlyn Hord ascended and sent a Sam Csire attack crashing back onto the hardwood for the Cornhuskers’ 13th block of the match.

The cratering rejection sealed Nebraska’s 3-1 win over Maryland volleyball in front of a sold-out Xfinity Pavilion crowd of 2,113 fans, the second-largest in the arena’s history.

Now sitting at 9-7, the Terps have lost each of their first four games in Big Ten play.

“It was really unique,” coach Adam Hughes said of the crowd. “We knew this was going to be a sellout going into it…we were hoping we could find a signature win in a big environment and came up a little bit short.”

The Cornhuskers overwhelmed Maryland with their height and physicality, totaling four blocks to cruise to a 25-18 first-set decision.

Meanwhile, Maryland’s serving woes overshadowed their impressive defensive effort in the first, as the Terps limited Nebraska to a .160 hitting percentage.

“[Nebraska] had eight kills and they find a way to win, but realistically we were a little nervous…from the endline,” Hughes said. “We missed four serves and they had four aces…I think that’s more our concern is starting on time and washing those nerves to get going.”

Fueled by a Laila Ricks service ace, the Terps jumped on Nebraska initially in the first set to win seven of the first nine points. But the cheers from the Maryland faithful were quickly drowned out by the throng of Cornhusker fans that filed into the sold-out Pavilion.

After Ricks misfired from the end line, the Cornhuskers imposed their will with a 12-1 run that featured an emphatic block assist from Kennedi Orr and Bekka Allick that drew an ear-splitting roar from Nebraska’s supporters.

“I think there’s some things we need to clean up on…closing on those long runs” sophomore libero Milan Gomillion said. “But I think overall we really did battle, and we knew coming in we had to battle.”

Coming off a 12-dig performance in Maryland’s last match against Michigan State, Gomillion paced the Terps with 16 more, warding off a bevy of scorching Nebraska attacks to notch her 700th career dig in the process.

The Terps were also energized by their freshman outside hitter, as Laila Ivey broke through with 12 kills in just her fourth career Big Ten match, including six in a strong third-set performance.

Maryland used five block assists to keep a step ahead of the Cornhuskers midway through the second frame, but two kills apiece from Hord and Madi Kubik propelled Nebraska ahead as the set began to cave in on the Terps.

Maryland injected life back on its side by staving off five set points with four consecutive blocks as the crowd erupted with each crucial rejection. But a Csire error slammed the door on a furious Maryland rally as Nebraska eked out a 25-23 win.

In danger of being swept for the first time all season, the Terps once again controlled the opening stages of the stanza. Ivey began the frame on an offensive tear, pestering the Cornhuskers with a quartet of kills as Maryland jumped out to a 10-7 lead.

Ivey’s hot hand quickly cooled as the set closed, however, allowing Nebraska to pull to within a point. But the Huskers squandered an opportunity to tie when Kenzie Knuckles’ serve went wide.

Maryland scraped across the next two points to push the nation’s third-best team to a fourth set as the latest cascade of roars came from the Maryland faithful.

“They got a three-point run…and you can feel the pressure coming back,” Hughes said. “That’s important for us, that we can stay on top of that pressure and find a way to win that third set. That’s probably my biggest takeaway…we can close and we need to learn how to close.”

Despite missing out on what would have been its tenth sweep of the season, Nebraska subdued the raucous Terp crowd with a defensive clinic, racking up 14 more block assists to dispatch Maryland in the fourth frame.

Nebraska maintained the lead for most of the frame, but Maryland remained afloat thanks to three of Csire’s 14 kills. The Terps then relied on its defense to draw even with the Huskers at 22-22 after two of Anastasia Russ’ team-high 11 blocks.

But a Lexy Finnerty service error gave Nebraska a crucial lead, allowing the Huskers to take the next two points to send Maryland to their fourth consecutive loss.

“It was a kind of a field position set,” Hughes said. “Missed a serve in a tight situation. The next thing you know, a good team’s gonna be able to close on you.”

Despite their 0-4 start to the conference slate, the Terps had a handful of positives to take away when the dust settled.

They held the Cornhuskers to a season-low .112 hitting percentage and became just the fourth team this season to push Nebraska to a fourth set. Maryland’s 18.5 total blocks are the most a team has mustered against Nebraska this season.

“So, we knew, you know…[third-ranked] team in the nation, we just came together and I think we just believed. I think that’s what we lacked, like previous games,” Gomillion said. “We got to believe in ourselves to do it because that’s all it takes.”