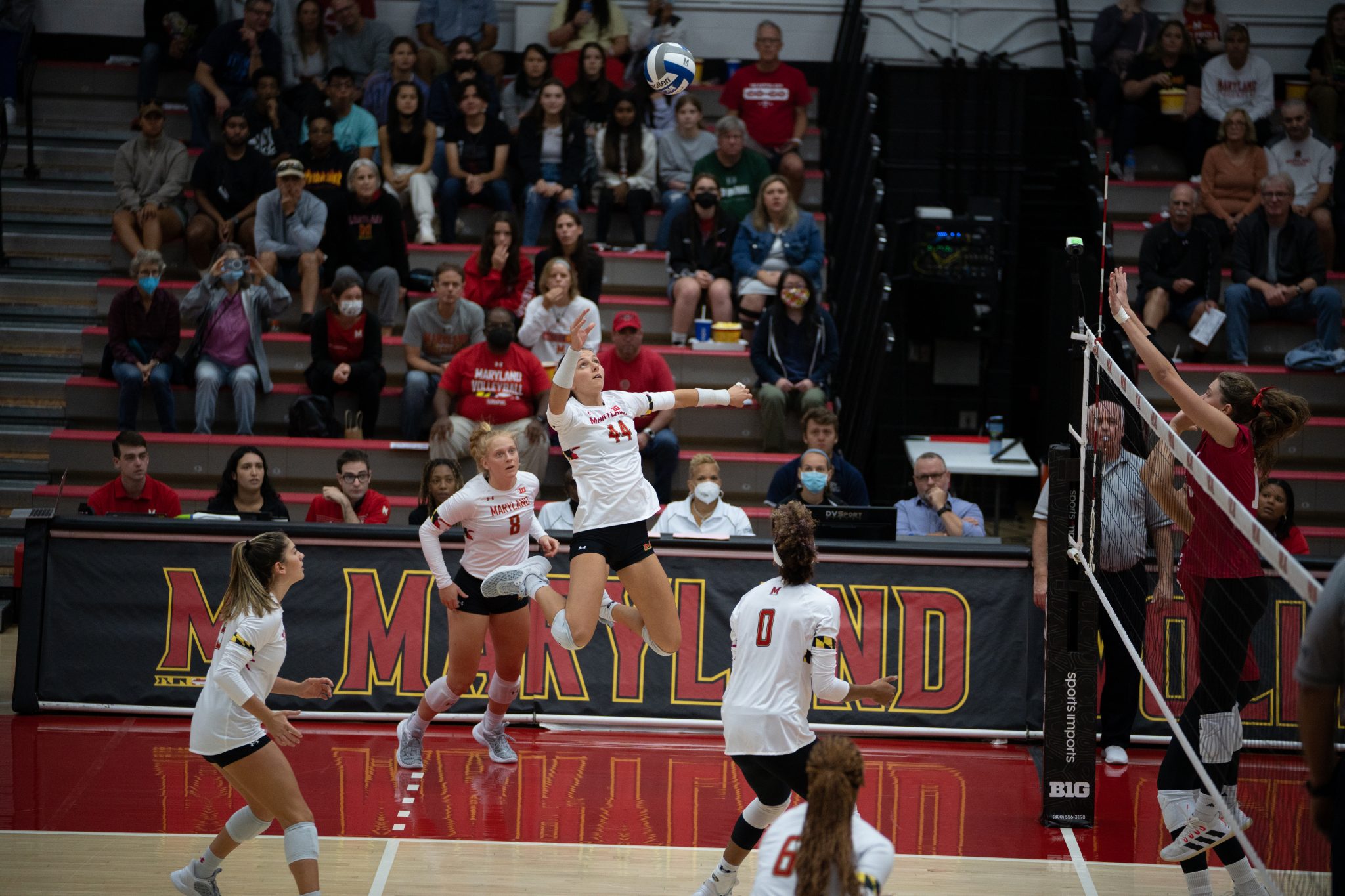 The final point of Friday night’s match hung in the air as both Maryland and Michigan State volleyball waited on the referee’s decision.

With Michigan State riding a 9-0 run, the Terps waited for the awarding of a point that would seal either their fifth-set collapse or give them a direly-needed point.

“I thought we got tight and that puts pressure on people to come up and make some big plays,” coach Adam Hughes said. “And we’re still looking and trying to find who that’s going to be.”

In the early stages of the fifth set, the Terps seemed to have found their answer in Anastasia Russ, who finished with a career-high 11 kills.

After Maryland and Michigan State traded wins throughout the first four frames, the Terps grabbed the opening points of the fifth set behind Russ’ career-best performance.

Spurred by Russ’s 10th kill and an emphatic block assist, Maryland toted an 8-5 lead against a backdrop of a packed Pavilion.

With the Terps seemingly in position to deliver the knockout blow, the Spartans instead administered the biggest gut punch of Maryland’s young season.

Maryland is now 0-4 in five-set matches.

“It’s definitely frustrating,” Russ said. “Unfortunately, still yet to finish [in the] fifth set, but I’m sure we’ll get it.”

For the third match in a row, the Terps spun their wheels to start, showing little offensive life.

The Terps struggled to find traction on the attack against a stingy Spartan defense that entered the match holding opponents to a Big-Ten low 10.14 kills per set.

Maryland hit a horrid -.095 in the first set, but kept pace with the Spartans courtesy of a litany of Michigan State attack errors.

The Terps’ first kill came when Laila Ivey finished off a Sydney Dowler lob with a vicious putaway, trimming the Spartan lead to 13-12.

The home squad continued to lurk as another kill from Ivey and a finish from Sam Csire pulled Maryland to within 16-15. But Doezema’s fifth finish of the stanza catalyzed a 6-0 Spartan run. Michigan State powered ahead to take the first set 25-18.

With the Terps on a 3-0 run, Csire belted a Dowler feed that deflected off of a Spartan defender and disappeared into a sea of raucous crimson-clad fans to give Maryland a 7-2 lead.

Csire continued her sizzling second set with consecutive aces that stretched the Maryland lead to 10-2 as the Terps began to seize control.

“I’m hard on Sam right now because she’s kind of our go-to player,” Hughes said. “I think she’s now realizing as she’s moved to an upperclassman [that] this is her role to kind of lead us.”

Maryland’s contributing cast broadened in the second frame, as the Terps used kills from Laila Ricks and Anastasia Russ to hit a sparkling .400 in the frame

The Spartans found little success in the second set against the best blocking team in the Big Ten, as the Terps didn’t allow Doezema a single kill as Michigan State sputtered to a meager .143 clip.

After Csire’s seventh of her team-high 15 kills pushed the Spartans to match point, Lexy Finnerty’s service ace polished off one of the Terps’ most complete sets of the early conference slate in a 25-15 victory.

After Csire’s seventh kill of the night pushed the Spartans to match point, Lexy Finnerty’s service ace polished off one of the Terps’ most complete sets of the early conference slate in a 25-15 victory.

While Maryland continued its offensive clinic in the third set, Michigan State turned to its leading scorer to match the Terps’ humming attack.

Her first three kills of the frame energized a 6-1 burst as Michigan State chugged to a 10-8 advantage. Both sides jostled through the middle stages as Ivey responded with three putaways of her own.

Moore’s first three kills of the frame energized a 6-1 burst as Michigan State chugged to a 10-8 advantage. Both sides jostled through the middle stages as Ivey responded with three putaways of her own.

In a sequel to the first set, it was a Terps’ serving error that provided the Spartans a timely boost.

Maryland parried with their own scoring spree that Rainelle Jones capped with a kill and a block assist that evened the score at 18. That set the stage for a thrilling finish between two teams starving for their first Big Ten win.

But a Ricks attack error gave the Spartans a critical point that helped them capture a pivotal swing set victory.

“[It was] a big difference-maker,” Hughes said. “I thought we were a little too high-error offensively…we did enough to give ourselves a chance to win… just missed the key points.”

But after Moore’s fifth and sixth kills gave the Spartans a late cushion, the Terps’ offense fizzled down the stretch. They committed three errors in a row as Michigan State ran away with a pivotal swing set victory.

Maryland stymied any semblance of Spartan momentum in the fourth frame by speeding out to a 14-4 lead, punctuated by Anastasia Russ’ cratering putaway in the face of a scrambling Spartan defense.

A flurry of Maryland errors gave Michigan State a pulse, but Dowler tucked a serve just inside the right sideline to send the match to a decisive fifth frame as the Pavilion crowd erupted.

Seeking their first five-set victory of the season, the Terps thrived on Russ’ two kills and a booming block assist to get an 8-5 lead.

But as the teams switched sides, so did the momentum — Michigan State roared back with their 10-0 run that won them the set and the game.