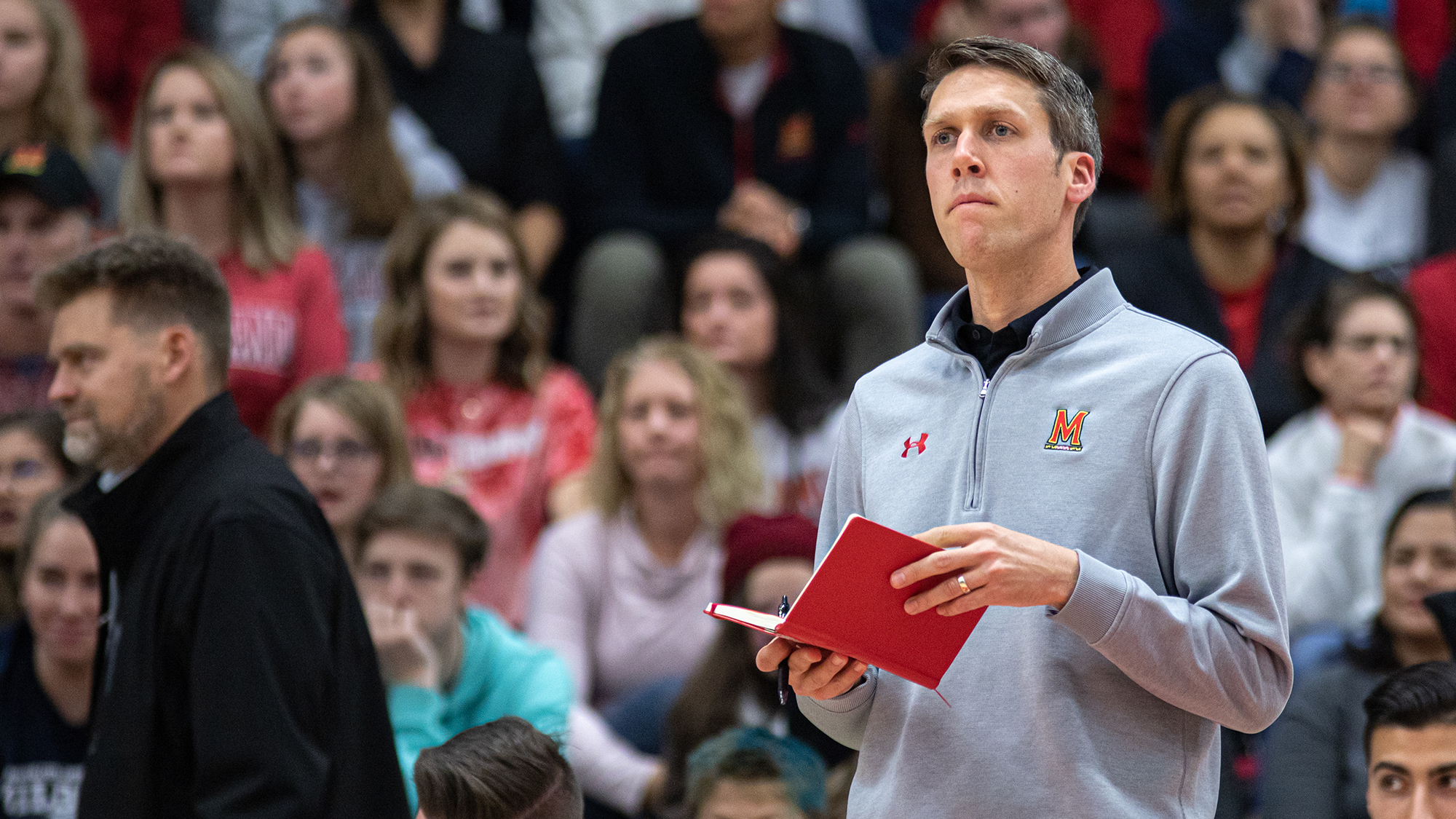 Adam Hughes watches from the sideline during Maryland volleyball's 3-0 loss to No. 4 Wisconsin on Nov. 9, 2019. (Julia Nikhinson/The Diamondback)

Maryland volleyball emerged from its first two Big Ten clashes empty-handed in the win column despite finishing its nonconference slate with a solid 9-3 record.

The Terps saw their 23-20 fourth set lead vanish against Illinois on Sept. 23 and returned to College Park with a 3-1 defeat. In Sunday’s bout against Indiana, Maryland couldn’t overcome a slow start in which it dropped the first two sets, falling to the Hoosiers 3-2.

“Coach [Adam Hughes] asked us what we need from him and what we need from each other,” junior outside hitter Sam Csire said. “And after that meeting, we had a really good practice … we’re working for what we want now.”

This weekend, the Terps have two stabs at cracking the Big Ten win column with a pair of home matches.

Maryland will take the floor Friday evening against Michigan State before a Sunday matinee against No. 3 Nebraska.

While it may be tempting to overlook the Spartans as a matchup against the highly ranked Cornhuskers looms, Hughes and his squad are taking things one match at a time.

“One of the things that we talked about is I don’t care who the opponent is, we got to give everyone our best shot, our best take,” Hughes said.

After committing 44 attack errors in their first two Big Ten matches, the Terps will have to minimize their mistakes against a stout Spartan defense that holds opponents to 10.14 kills per set — the best in the Big Ten.

“It’s gonna be a dogfight,” said Csire, who leads Maryland with 3.28 kills per set. “Both defenses are really good, but I think if we do the correct scouting and work on certain things in practice, then we should be hopefully ahead of the game and know what’s going to work and what’s not.”

The Terps return to their home court for a date with the Cornhuskers following their Friday night showdown against the Spartans. Maryland hasn’t beaten Nebraska since joining the Big Ten in 2014.

The Cornhuskers, who played in last season’s national championship, tout an intimidating lineup brimming with height across the net.

For Csire and the rest of the Maryland attack, going toe-to-toe with a taller opponent places extra emphasis on doing the little things right.

“Just realizing that height isn’t a determinant of if you’re gonna win or not versus a team,” Csire said. “It’s just more so like your IQ of the game and your view of the court and seeing what’s open and just be smart with it.”

Maryland will hope to start fast. The Terps are 9-0 when winning the first set in 2022 and 0-5 when losing it.

“If we just start from the beginning, kind of have that energy right away, I’m sure we’ll have help from our crowd, considering Sunday’s sold out already,” Csire said.

While the Terps will be tested against two of the Big Ten’s premier defenses, Maryland is determined to rally together after a tough weekend and secure what has been an elusive first conference win.

“We have this motto this year, it’s ‘humble and hungry,’” Csire said. “Remembering that we’re a team, and we’ve got to be hungry together. Not one person is gonna get it done. Everyone has to contribute.”