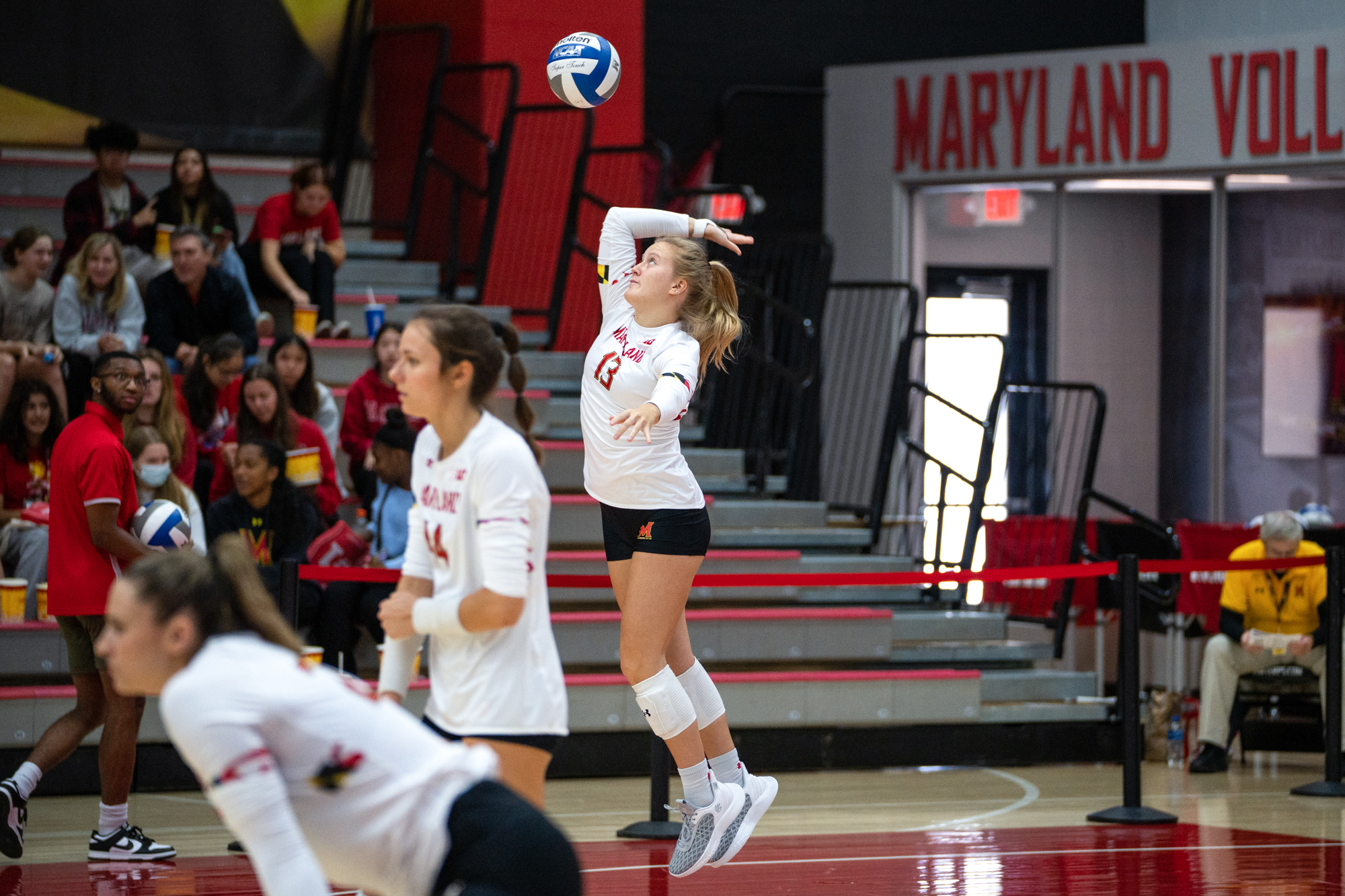 The junior right side hitter took four dribbles, propped the ball in her left hand and laced a line-drive serve toward the Hoosiers.

But Ricks’ serve never reached its target. Instead, the ball thwacked against the top of the net and ricocheted into the arms of an unsuspecting Sam Csire.

It was the apex of a weekend littered with serving woes for Maryland volleyball. The Terps committed 25 errors from beyond the endline en route to a pair of defeats against Illinois and Indiana, dropping Maryland to 0-2 in conference play.

“We were very high error today,” coach Adam Hughes said following the Indiana loss. “And when you do that in the Big Ten, it’s going to give people opportunities to get back in it.”

Ricks’ service error capped off a season-high 17 service error performance from the Terps against the Hoosiers, opening the door for a critical Indiana run. The Hoosiers scored the next three points to take a 10-8 lead, a cushion just large enough to outlast a valiant Maryland comeback attempt.

With the final set at a 15-15 deadlock, Indiana outside hitter Mady Saris’ 20th kill followed by Maryland’s 23rd attack error put an end to the Terps’ rally for good.

Maryland’s serving struggles were an unusual sight for a team that had seemingly established itself as one of the country’s most dangerous from the endline.

Entering Big Ten play leading the conference with 2.18 aces per set — good for eighth in the country — the Terps posted just 13 aces across their first two conference matches of 2022.

Maryland’s 25 service errors were its most over a two-game stretch since it committed 31 across a pair of matches against Indiana in March 2021.

It seemingly didn’t matter who stepped up to serve for Maryland, as six players finished the weekend with more errors than aces. Junior setter Sydney Dowler provided a semblance of relief, converting a team-high five aces to break even with her five service errors.

In their first Big Ten match against Illinois, it was less about how many service errors the Terps committed and more about how the Fighting Illini capitalized on them. Though the Terps finished Friday’s match with only eight service errors, three of those mistakes led to costly Illinois runs.

A pair of Maryland misfires from the endline ignited Illinois runs of 5-1 and 6-1, respectively, opening the floodgates for the Fighting Illini to run away with the first set.

In the fourth frame, a Maryland serving mistake broke an 8-8 tie, ultimately leading to a pivotal 7-1 Illinois run that helped seal the loss.

“It was a streaky game all along,” Hughes said. “It’s a challenge to get wins on the road. They’ve got the crowd at their back, which definitely helped.”

Even a return to its home confines couldn’t cure Maryland’s miscues, as the Terps committed four service errors in the opening set against Indiana.

“The energy was a little tense at first,” graduate middle blocker Rainelle Jones said. “It’s our first Big Ten home opener, so it was a big crowd that we were expecting.”

Fortunately for the Terps, the Hoosiers also struggled mightily from the endline. They committed 18 service errors to help Maryland creep back into the match.

Though Maryland only committed one service error in the fifth frame, it proved to be a gut punch, as the Hoosiers finally cashed in with their 4-0 jaunt.

What was a strength for Maryland throughout its nine-win nonconference schedule has suddenly turned into a place for improvement with the Terps still winless in Big Ten play.