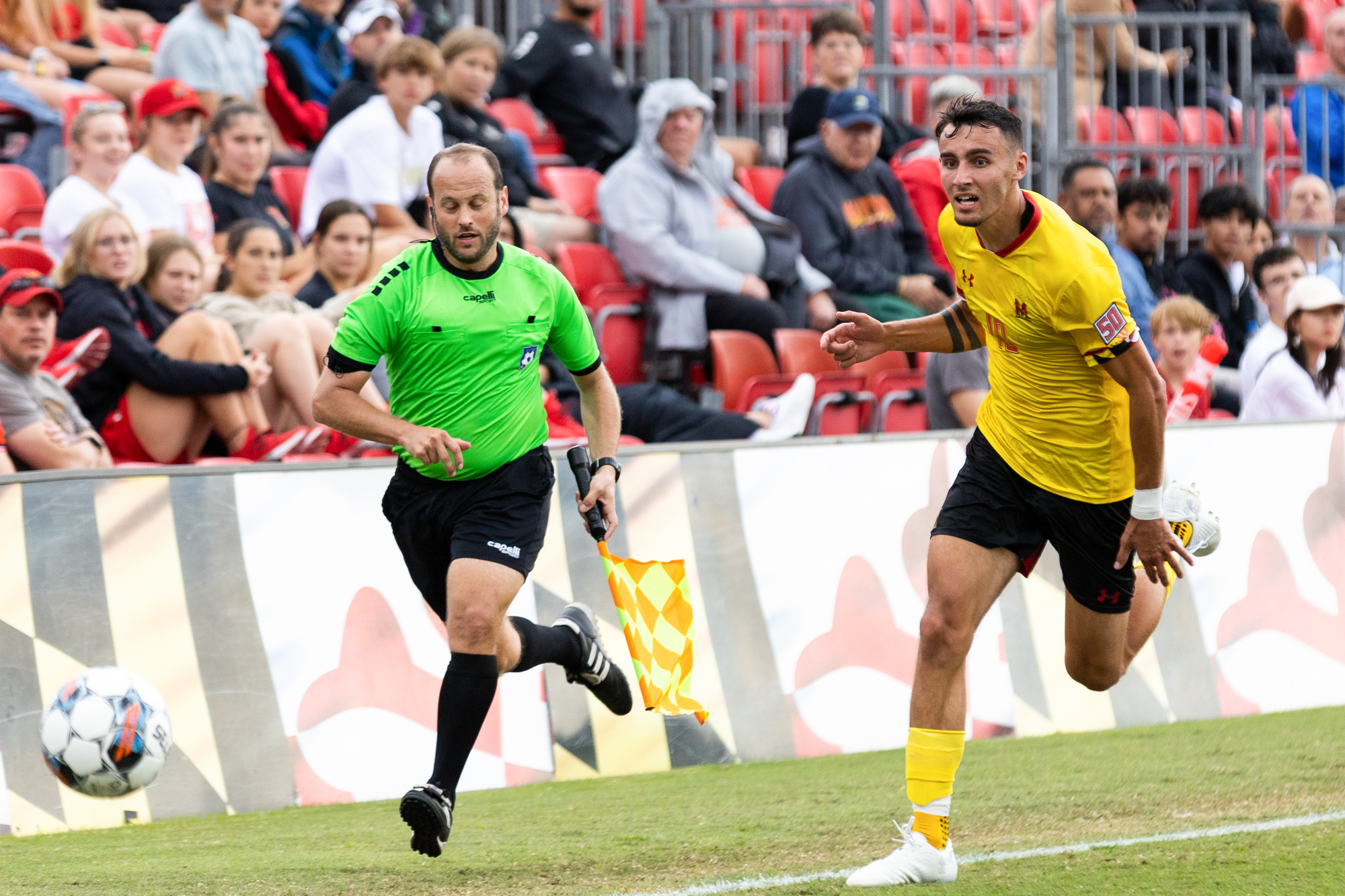 Stefan Copetti leapt up after he saw the ball hit the back of the net.

The Maryland men’s soccer forward sprinted toward the Terps’ substitutes on the sideline before sliding on his knees. A mob of teammates surrounded Copetti in celebration of his first career goal.

“Once I saw that ball go in the net, the emotions were high, for sure,” Copetti said. “Just seeing the bench run towards me and celebrate with me. It was an awesome feeling.”

Copetti brought his own cheering section to a sold-out U-M Soccer Stadium that jumped to their feet, screamed, shouted and hugged.

Copetti’s mother, father, grandmother and grandfather made the trip to Ann Arbor, Michigan, on Sept. 16 from Toronto and cheered together after his score. His parents, Emiliana and Jack, attended a few Maryland home games earlier in the season, but the shorter trip allowed his grandparents to be there for the occasion as well.

“It was like a storybook weekend for us. I got to bring my parents down to see Stefan, he scored his first goal as a Terp at the game with his grandparents there,” Jack Copetti said. “It was really heartwarming for my dad, I know, to see his grandson that he’s been watching since he was a little kid playing and supporting him.”

The striker threatened throughout his sixth game with the Terps, almost scoring twice from close range minutes before bagging his first Maryland goal. His finish, the game-winner, helped the Terps open Big Ten play with a victory.

“With my parents in the stands, it added a lot more emotion to it as well,” Copetti said. “It was a special night for me and my family.”

Copetti transferred to Maryland following two seasons at Marist where he scored 14 goals and provided nine assists in 41 appearances for the Red Foxes.

The forward ended last year with nine goals and three assists and was named first team All-MAAC and third team All-East region before deciding to enter the transfer portal.

Copetti said he wanted to challenge himself with his next move. Coach Sasho Cirovski told the Canadian playing time wouldn’t be guaranteed.

That risk was exactly what Copetti was looking for.

“Knowing that Maryland is just a top five school all-time in soccer it’s just, it was really hard to turn down,” Copetti said. “I had a lot of other options, but like I said, when I heard Maryland calling, I thought there was only one choice.”

His father, Jack Copetti, played for the Terps from 1985 to 1988 and earned three All-ACC first team selections. He also won the Talbot T. Speer Award in 1989, given to a male Maryland athlete who demonstrated excellence in leadership, scholarship and all-around ability.

“When I was in the transfer portal and I got a call and text message from Sasho [Cirovski], it was obviously really, really special knowing my dad came here and the amount of success he had,” Copetti said.

Jack Copetti said a few different programs approached Copetti and he didn’t want his past to influence his son, telling him to “make this choice based on what you want and what you feel is the best place for you.”

However, Copetti chose to join Maryland and wear the same colors his father donned more than 20 years ago.

“Inside, [it was] very, very heartwarming,” Jack Copetti said. “Really, really nice to see my son go to the school that I attended back in the ‘80s and to see him walk in the footsteps that I walked in.”