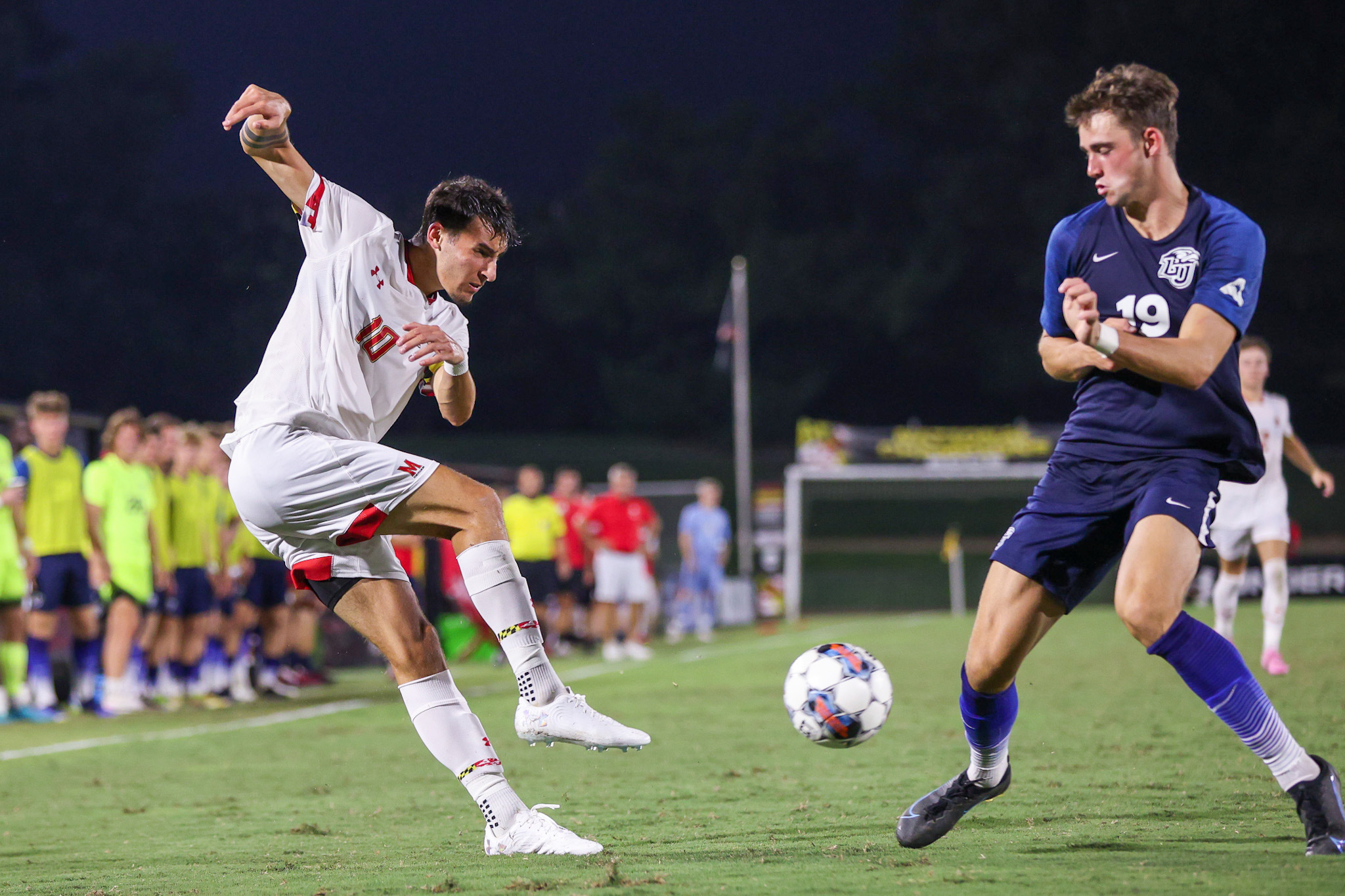 Stefan Copetti got behind Michigan’s defense twice in quick succession, flashing a shot past the near post before forcing a save in the 64th minute.

The Marist transfer was on the spot three minutes later when Wolverines goalkeeper Hayden Evans spilled a low and driven cross from Hunter George, finally tapping his first career goal for the Terps into the back of the net.

Copetti’s strike gave No. 8 Maryland men’s soccer a lead it wouldn’t surrender in a 2-1 victory over Michigan in the Terps’ first Big Ten game of the season.

“We’ve typically gotten off to slow starts in many of the years in the Big Ten and getting the win, especially on the road in a tough venue, I think is very good,” coach Sasho Cirovski said. “We have set some goals for the conference this year, and it’s a good start.”

Jamie Lowell started his second game of the season after starting goalkeeper Niklas Neumann picked up an injury in training, according to a team spokesperson.“[Neumann] is our starting keeper, Jamie is also a starter in my opinion,” Cirovski said after the Liberty match, which Lowell started in. “Any opportunities we can find to give Jamie to play, we’re very confident in his ability.”

Lowell made four saves in the first half and kept the match tied in the 43rd minute after Christian Pulselli got in behind Maryland’s defense. Lowell parried the forward’s shot away, one of five saves throughout the match.

The Terps failed to register a shot on target until the 30th minute, when they broke the deadlock with their first of the game.

Hunter George’s free kick found Chris Rindov’s head at the near post. Evans scurried out of his net and attempted to claim the ball but came second to Rindov, as the center back’s header looped into an empty net to give Maryland the lead.

Rindov quickly canceled out his goal with an error two minutes later, playing the ball straight to Michigan’s Iñaki Rodriguez. The senior latched onto the ball just outside the Terps’ penalty box and shifted it onto his right foot before curling a shot past Lowell to tie the game in the 32nd minute.

Maryland’s only shot on target of the opening half kept the game tied at halftime, while Michigan notched five shots on target in the frame.

“In the first half, Michigan made it difficult for us,” Cirovski said. “They really were very compact and we just were not very mobile and we played too much into their hands. We played too much lateral and backwards and then put ourselves in trouble.”

Copetti re-entered the game in the 61st minute and quickly showed his influence. The forward registered two shots before giving the Terps the lead in the 67th minute, pouncing on another mistake from Evans to score his first goal in a Maryland jersey.

The Wolverines ventured forward late into the game, notching five shots after Copetti gave the Terps the lead. Michigan won a corner with seconds left but failed to notch a shot on target.

Multiple Wolverines fell to the ground as Lowell claimed a lofted cross and the final buzzer sounded. Maryland ran out winners in its first conference game of the season despite Michigan notching more shots on target.

The Terps will return home to take on Penn State Tuesday. Cirovski hopes to see a more complete outing from his squad despite the victory.

“We have to learn from this match that we can’t allow a similar first half performance,” Cirovski said. “We have to make sure that we come out on the front foot and really put together a full 90 [minutes].”