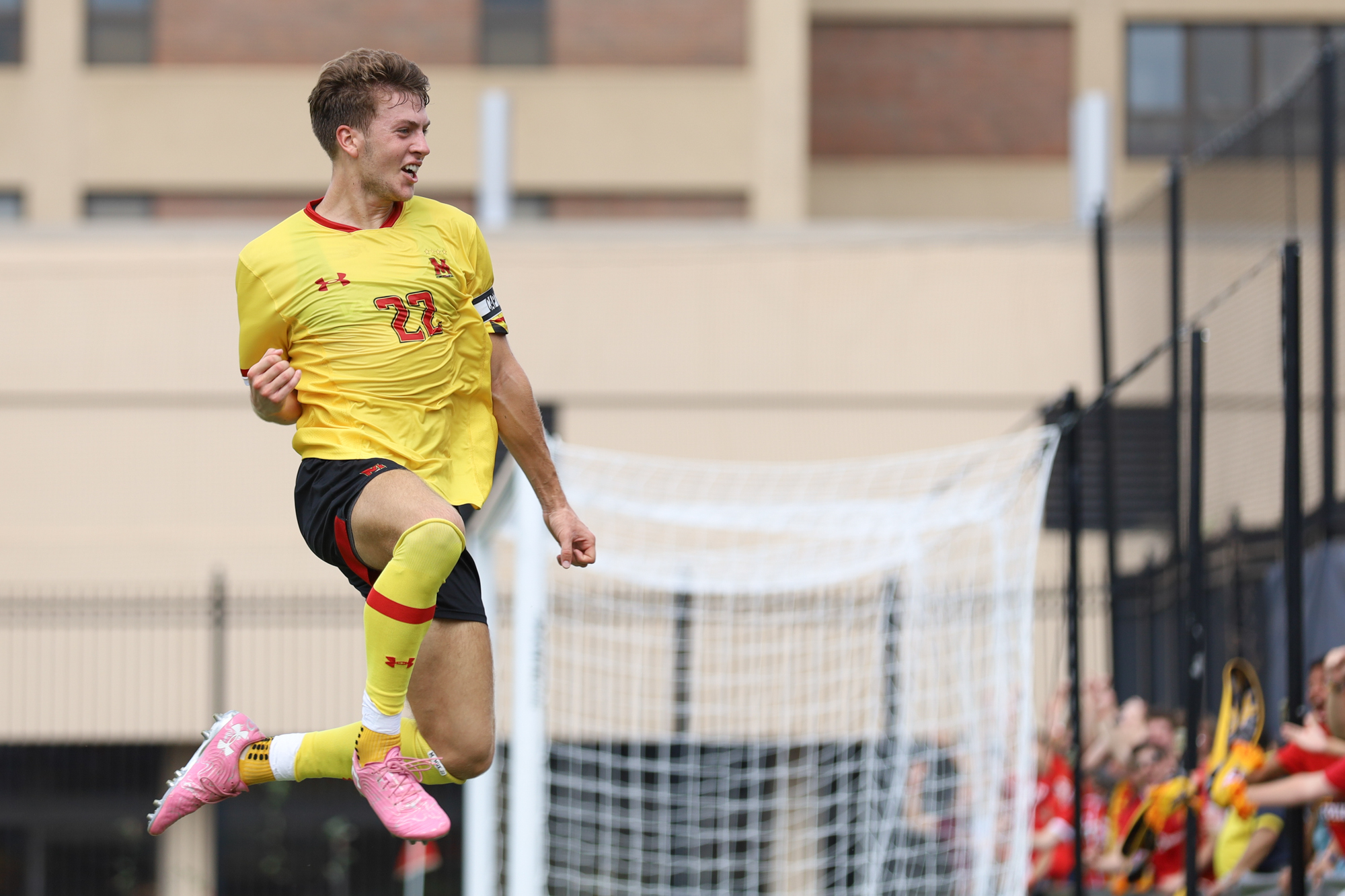 Nick Richardson chased after a Georgetown back pass to goalkeeper Luca Ulrich, who left his goal to retrieve the ball along the end line. The defender blocked Ulrich’s attempted first-time clearance before he shifted the ball onto his left foot and calmly found the back of the vacated net.

The redshirt senior leapt in the air and pumped his fist before he embraced his teammates to celebrate the first goal of his tenured collegiate career.

Richardson’s finish doubled Maryland men’s soccer’s lead over the Hoyas and ended up as the game winner in the Terps’ win over No. 21 Georgetown Saturday.

“It was awesome, I was put through with emotion, and I didn’t really know what to do in the end,” Richardson said. “That was the first time one’s really come my way in a while like that, so it was amazing just to put in the back of the net.”

Richardson’s already contributed to the Terps’ attack with two assists this year, a mark he’s hit in each of Maryland’s last two seasons since moving to right back. He sits third on the team this year in points with four and is tied for the fifth most shots.

He came close to finding the back of the net earlier this year after stinging New Hampshire goalkeeper Jassem Koleilat with a strong strike that was merely parried away in Maryland’s season opener.

However, the defender’s simple finish against the Hoyas marked his first career goal despite his 52 appearances and 21 shots with the Terps.

“I was a little bit shocked that this was [Richardson’s] first goal — I didn’t expect it to be,” Niklas Neumann said. “Obviously a very, very smart move to press the goalkeeper like that. It makes it tough on him and then just capitalizes on his mistake.”

Richardson credited his teammates’ support and said it made the goal and Maryland’s first victory over Georgetown since 2016 even sweeter. The Terps’ 2-1 win was their second in a row against a local rival after routing Virginia 6-1 on Sept. 5 at Audi Field in Washington, D.C.

“[He] absolutely deserves it and you know, he’s been putting an absolute shift in day in and day out over the last three years,” Neumann said. “He’s a great leader, great personality, so just super happy that he finally gets his first goal.”

[Maryland men’s soccer scored its most goals since 2012. Here’s how.]

The redshirt senior is one of four listed defenders to contribute to goals so far this season. Center backs Chris Rindov and William Kulvik bagged goals while Alex Nitzl — who has also operated in midfield — notched two assists.

Cirovski singled Richardson out as one of the Terps’ key players in their win over the Hoyas, hailing his ability on both sides of the ball that resulted in Maryland’s second victory over a ranked team this season.

“Defensively, [Richardson] did an incredible job on shutting down their left wingback Kieran Sargeant,” Cirovski said. “Then for him to get up there and win that ball and then finish off that play to give us a winner, it was just outstanding.”