No. 14 Maryland men’s soccer defeats No. 21 Georgetown, 2-1, for second-straight win 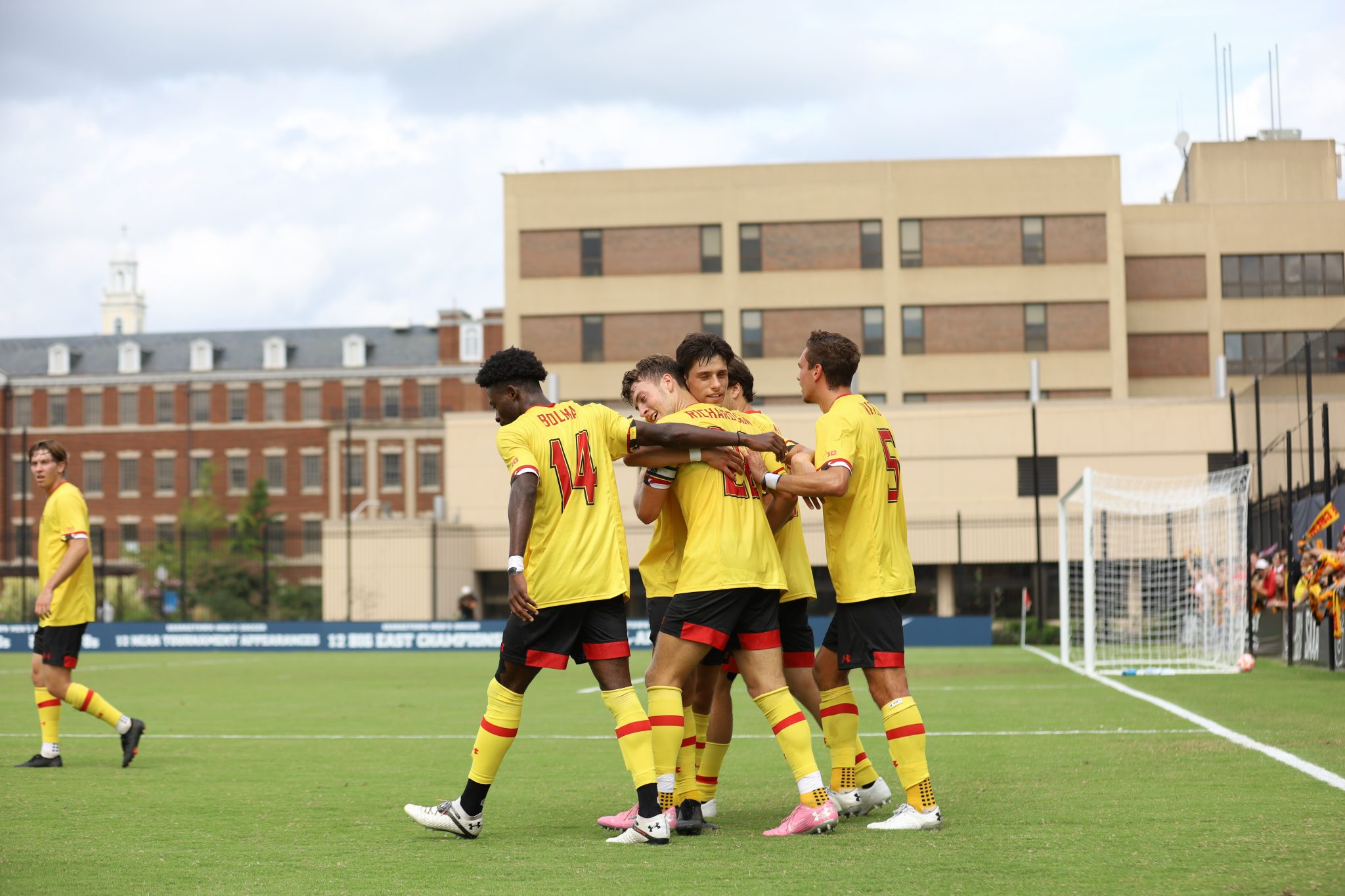 Malcolm Johnston stepped up to the penalty spot for the second-straight game. The midfielder slotted his shot into the bottom left corner — the opposite side of his strike against Virginia — sending Georgetown goalkeeper Luca Ulrich the wrong way to give the Terps an early lead.

No. 14 Maryland men’s soccer’s first-half offensive success powered it to a 2-1 win over No. 21 Georgetown in Washington, D.C. Saturday, its second-straight win in the nation’s capital after defeating Virginia at Audi Field Monday.

The Terps outscored their two local rivals 8-2, rebounding after their only loss of the season to Denver on Sept. 2. The victory is their first over the Hoyas since 2016, and first at Georgetown since 2009.

“We played our best half of the year [in the first half],” coach Sasho Cirovski said. “Our defensive pressure, our ability going forward, our chances we created was outstanding.”

Maryland took the lead in the seventh minute after Colin Griffith earned a penalty kick for the second-straight game. The forward twisted away from three defenders to get to the end line before being hauled down by Diego Letayf.

“[Griffith’s] a player that we knew when we recruited him that he can make something out of nothing,” Cirovski said. “He is very shifty, he has really good balance, he makes it very difficult on backs.”

Johnston’s penalty kick gave the Terps the lead for the second-straight match.

[Maryland men’s soccer scored its most goals since 2012. Here’s how.]

The Hoyas struggled to play the ball out of the back and gifted multiple chances to the Terps early on. Joshua Bolma intercepted two passes from Georgetown defenders, but the redshirt sophomore failed to take advantage of the Hoyas’ mistakes.

Richardson blocked Ulrich’s clearance while the goalkeeper vacated his net, and the redshirt senior slotted the ball into an open goal to notch his first career finish in the 30th minute.

Maryland’s defense limited Georgetown to just one shot on target in the first half and took its 2-0 lead into halftime.

Georgetown’s Jack Panayotou’s strike caromed off the crossbar in the 67th minute before the Hoyas created one of their best chances of the half. Marlon Taboya’s blocked shot fell to Aidan Rocha, who fired a strike from close range that Neumann parried away.

Neumann made another massive save in the 75th minute, sprinting across goal to deny Zach Zengue from close range after the midfielder latched onto a loose ball inside the penalty box.

However, the German couldn’t hold the Hoyas scoreless. Panayotou fired a shot into the roof of the net past Neumann to bring Georgetown within a goal of Maryland.

The Hoyas threw players forward in the waning minutes of the match, but failed to find the equalizer. The Terps withstood a late flurry of Georgetown chances to take down their second ranked opponent of the year.

“We won the battle of the DMV and today we were able to come in and finally get one over Georgetown,” Cirovski said. “I’m very proud of our guys. I think we’re making progress. We’re starting to understand what it takes.”