Maryland men’s soccer scored its most goals since 2012. Here’s how. 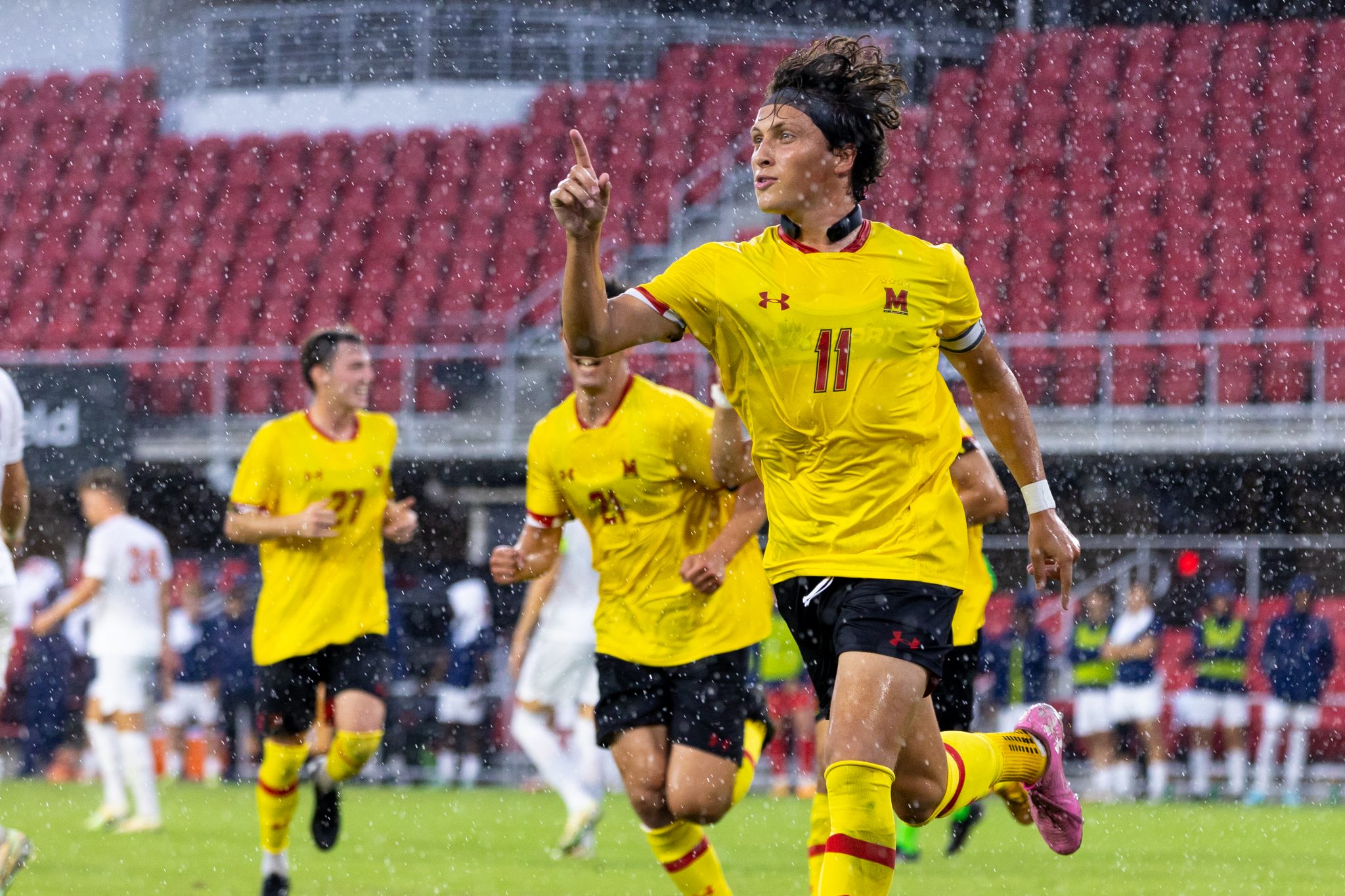 After three frustrating games in which Maryland men’s soccer struggled to finish its chances, its scoring erupted in Washington, D.C., at Audi Field against Virginia Monday.

Two first-half strikes and a quartet of finishes in the final 45 minutes secured the Terps’ largest victory over the Cavaliers in 47 years — by the same 6-1 scoreline Maryland beat Virginia with in 1975.

The attacking onslaught came as a welcome sight for the Terps, who registered just three goals in their first three matches. Maryland scored its most goals in a single game since a 6-0 victory over California in 2012.

After Denver held the Terps scoreless for the first time this year on Friday, coach Sasho Cirovski said he wanted his team to “introduce a few more direct ways to get forward.”

Two of Maryland’s first three goals of the season came from corner kicks, and the Terps’ only goal from open play started from their defensive half of the field — forcing them to complete eight passes before Hunter George found the back of the net.

Maryland scored five of its six goals with a buildup of four passes or fewer Monday, hitting Virginia on the counter-attack and converting on set pieces to quickly pick apart the Cavaliers’ defense.

“I think we were a little too predictable in our buildup [before], and you saw today that we took moments to build and change the point of attack, but we also moved the ball a little quicker,” Cirovski said. “There was times that we would skip a few lines, whether it was with passes on the ground, or passes in the air. We would … get the ball forward a little bit quicker.”

Justin Harris and Griffin Dillon notched the Terps’ first two counter-attacking goals of the year, showcasing Maryland’s direct play. Cirovski’s squad won the ball in its own half and quickly moved the ball forward in both cases, scoring 10 seconds and 12 seconds after regaining possession, respectively.

Maryland’s attackers took advantage of Virginia’s feeble defense. When the Cavaliers had possession, they pushed their fullbacks up the field but when the Terps won the ball back, they quickly transitioned and exploited Virginia’s three center backs.

“[Virginia] was playing a back three, which helped us in the attacking third because we could counter them and stuff like that when they’re spread out,” Joshua Bolma said. “The personnel up top was working in conjunction. We knew if this one goes, this one could step in, and everyone can kind of play the different roles up top.”

Cirovski’s squad finished the game with its lowest possession total of the year at 49 percent because of their “route one” approach. However, the coach liked his team’s defensive tenacity and willingness to play the ball up the pitch quickly.

The Terps’ direct play allowed them to register nine shots on goal, the most they’ve had this year.

Cirovski’s squad created and capitalized on chances. Maryland shot 40 percent, with six goals on 15 shots, the most clinical the Terps have been in front of goal in 121 matches.

The Terps’ offense found their form with a new approach just three days after their first loss of the season on a big stage, in one of college soccer’s most historic rivalries against Virginia.

The resounding victory will encourage Maryland as it approaches its third ranked matchup of the season Saturday at Georgetown.

“It’s surreal,” Bolma said. “[Cirovski] said after the game as well, that he’s never seen this kind of victory in the DMV battle. It’s really a great feeling and we’re buzzing … Coming off of a loss, this is what we needed.”