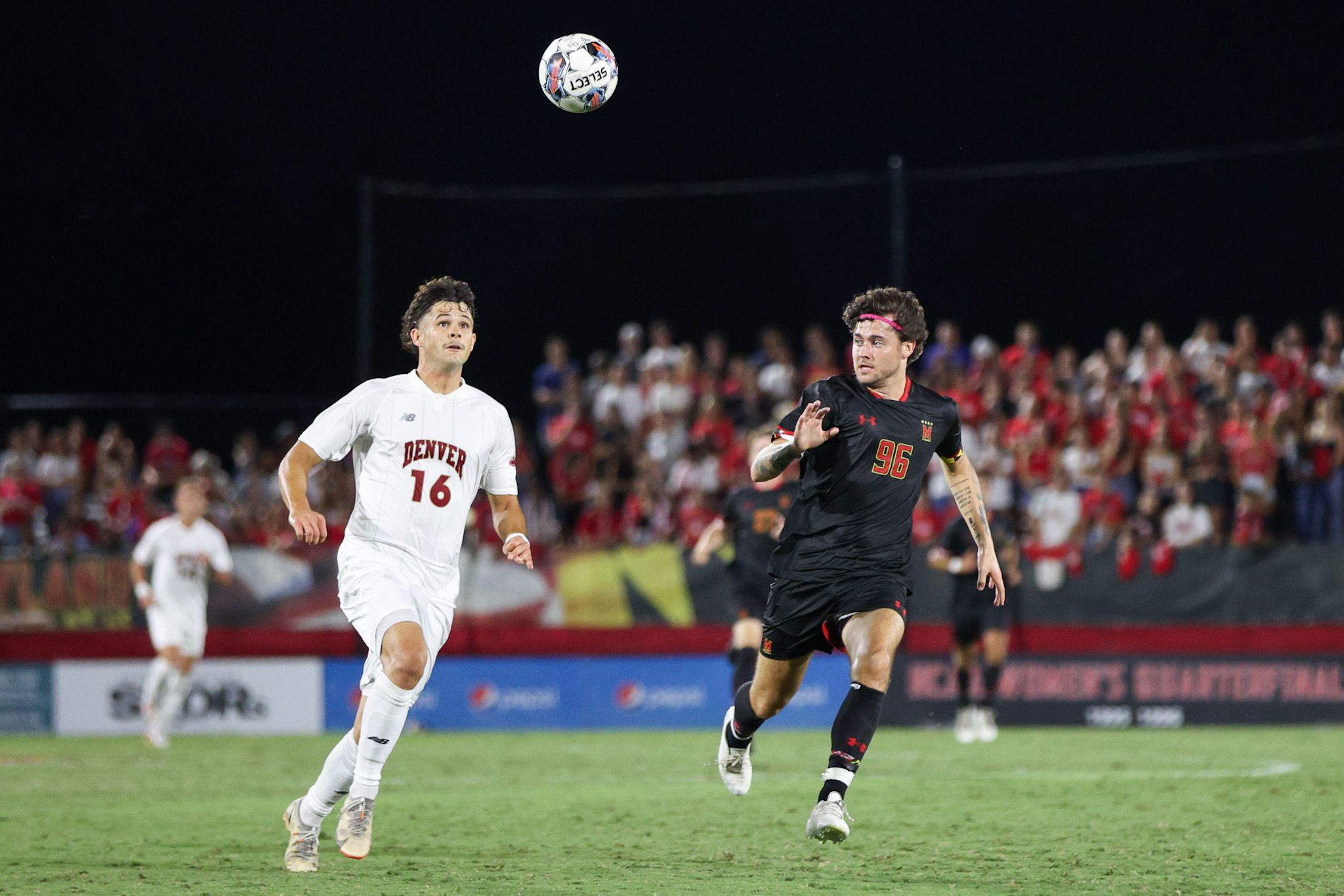 Maryland men’s soccer struggled to play through Denver’s press, losing possession time after time in the first half.

Chris Rindov’s feed was intercepted by Aidan O’Toole in the 29th minute, resulting in a shot by the midfielder that forced a save from Niklas Neumann. An errant Luca Costabile back pass with under a minute left in the opening period gave the Pioneers a chance to extend their lead, but Neumann stepped up again.

The defenders’ giveaways weren’t punished as the goalkeeper stopped both chances. However, their struggles portrayed the Terps’ inability to progress the ball forward after falling into an early deficit.

No. 9 Maryland struggled to overcome first half strikes from Ronan Wynne and Sam Bassett as it fell in a 2-0 loss to No. 20 Denver.

“We have to introduce a few more direct ways to get forward, we’re a bit predictable with our possession,” coach Sasho Cirovski said. “So we have to be a little more purposeful in our ability to get forward.”

[Maryland men’s soccer has thrived thanks to the versatility of Alex Nitzl, Joshua Bolma]

Denver only had 41 percent of possession in the first half, but 65 percent came in the attacking end. The Pioneers forced giveaway after giveaway as the Terps attempted to play out of the back.

“We were just a little slow, we’re a half step off and they were much faster, much more physical, much hungrier for the ball,” Nick Richardson said. “Credit to them again, they just were more dominant in their press and they kind of played how they wanted to play.”

The Pioneers were already riding high after Wynne met Bassett’s corner kick at the back post, heading the ball into the back of the net via a deflection to give Denver an early lead in the sixth minute.

The Terps’ problems were compounded after Joe Suchecki stuck out a leg as Jake Mecham glided into the penalty box, bringing down the defender. Bassett sent Neumann the wrong way on the ensuing penalty kick to quickly double the Pioneers’ lead in the 17th minute.

“That first goal changed the game, gave them certainly a lot more confidence and belief,” Cirovski said. “Then the second goal was a real killer, and I think that’s a big hole to dig out of.”

Maryland grew back into the game after Denver’s early strikes. Joshua Bolma hit the post after receiving a quick free kick from Hunter George in the 31st minute. The redshirt sophomore followed up with another attempt that ricocheted off a Denver defender. Maryland appealed for a penalty, claiming his strike hit the defender’s arm, but was only awarded a corner kick that was quickly cleared.

The Terps outshot the Pioneers 8-6 in the opening 45 minutes, but found themselves down 2-0 at halftime.

Maryland didn’t gift chances to Denver in the second half. The Pioneers only notched three shots in the final 45 minutes and were unable to build on their lead, but the Terps struggled going forward as well.

Bolma whipped a high cross that met the late run of Griffon Dillon in the 78th minute, but his first-time shot went harmlessly wide of goal. The attempt was only one of two Maryland made in the second half despite keeping possession for 61 percent of the match.

“It’s just being a little bit more cleaner in our attack, the final ball, the final finish, it just isn’t very good,” Richardson said. “But that takes training, it takes getting to know each other a little bit better and kind of develops over the year. It’s still very early in the year and hopefully it becomes better and better as we go.”