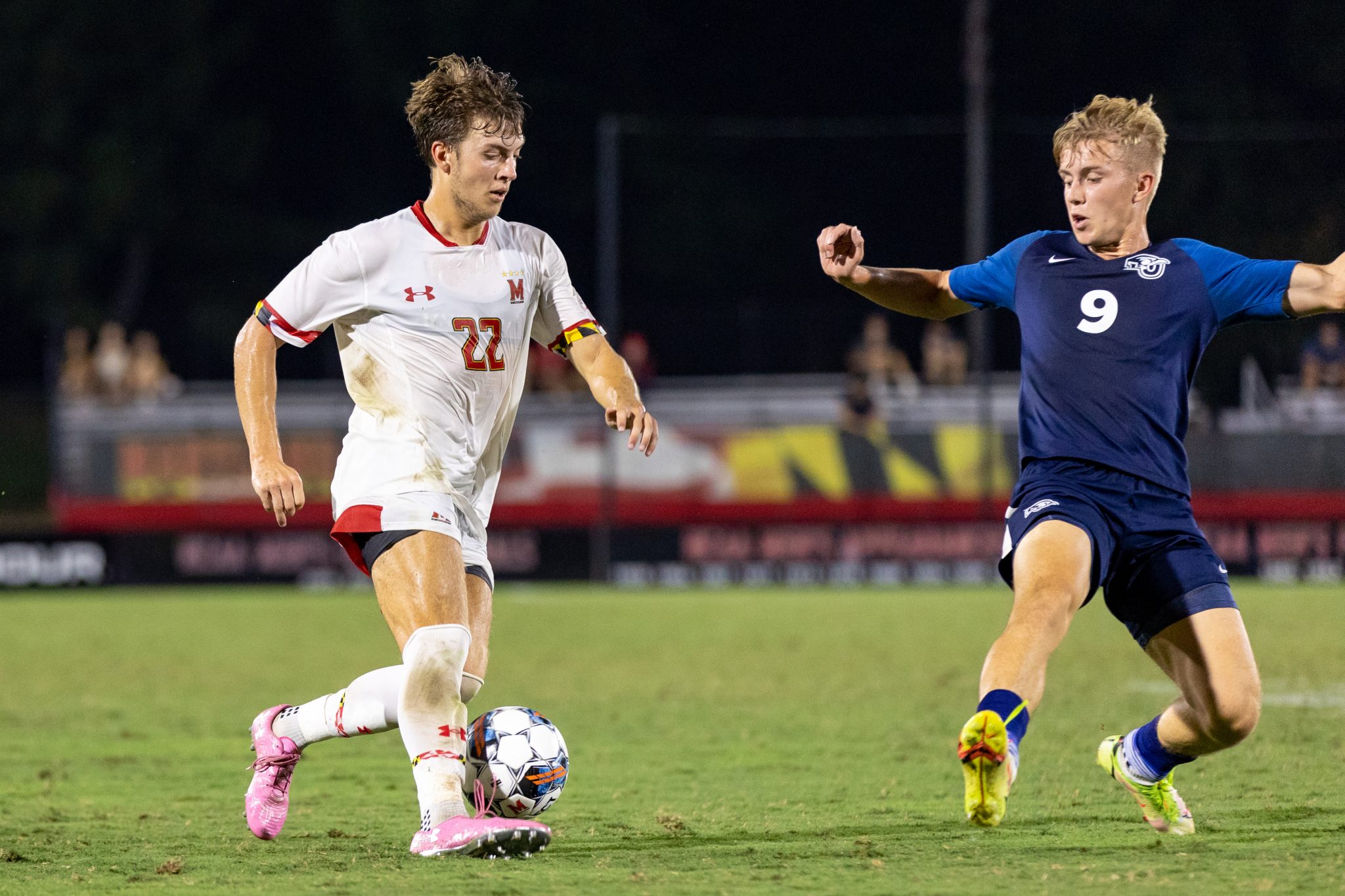 Marko Mitrevski stood over a free kick at the corner of the penalty box. Liberty had scored from a set piece earlier in the match but this time, the midfielder’s delivery went straight at Jamie Lowell, who made a comfortable stop.

Lowell’s simple catch was the only save a Maryland men’s soccer goalkeeper has made two games into the season. The Terps’ new-look back line — featuring Nick Richardson at right back, William Kulvik and Chris Rindov paired at center back and either Alex Nitzl or Luca Costabile at left back — has limited their first two opponents to just three total shots on target.

“We came in and just really connected well,” Rindov said. “I feel like coming in through preseason, the culture has been very [good] back there.”

The Terps’ more experienced options along the back line in Rindov and Richardson have combined to make 89 appearances for the Terps throughout their collegiate careers, while Kulvik and Costabile have made just 19 appearances between them.

In their first match starting together, the foursome held No. 9 New Hampshire to just one shot on target. The Wildcats ranked No. 12 nationally in scoring offense last season, averaging 2.24 goals per game.

While New Hampshire’s Bilal Kamal’s deflected strike did flash past goalkeeper Niklas Neumann and find the back of the net for a late consolation goal, coach Sasho Cirovski was pleased with his first glimpse of Maryland’s defense.

“You have to give tremendous credit to our whole team defending, but I thought our backline in particular was outstanding,” Cirovski said after the Terps’ win over the Wildcats on Thursday. “I thought [Rindov] and [Kulvik’s] partnership was great and the work that both [Costabile] and [Richardson] did on both the attack and defensive side was outstanding.”

Maryland’s defensive players have contributed to each of the Terps’ goals so far this season. Richardson’s cross was headed across goal and eventually scored by Hunter George, while Nitzl — who started at left back against Liberty and can play along the backline and in midfield for the Terps — assisted on Colin Griffith’s game-winning goal against the Wildcats.

Despite only allowing three shots on target in their opening two games, the Terps have conceded twice.

In addition to Kamal’s goal for New Hampshire, Bryce Swinehart opened the scoring for Liberty after latching onto a flick-on header off of a Mitrevski free kick, finding the bottom corner from close range.

Nitzl said that Maryland knew Liberty could be dangerous on set pieces during the match but the Terps still gave up 12 fouls and conceded both shots on target from free kick situations.

Cirovski has been pleased with his team’s defending so far this season, and he hopes the Terps can get back quicker in transition to decrease the amount of fouls they give up — which would in turn limit the amount of opportunities opponents have to score from set pieces.

“We unfortunately gave this team a couple of set pieces and that’s the only two shots they had on goal the whole day,” Cirovski said. “The fouls could have been avoided, so the lesson is we just need a little more humility in our defending and not give teams opportunities like set pieces.”