No. 20 Maryland men’s soccer takes down No. 9 New Hampshire in season-opener, 2-1 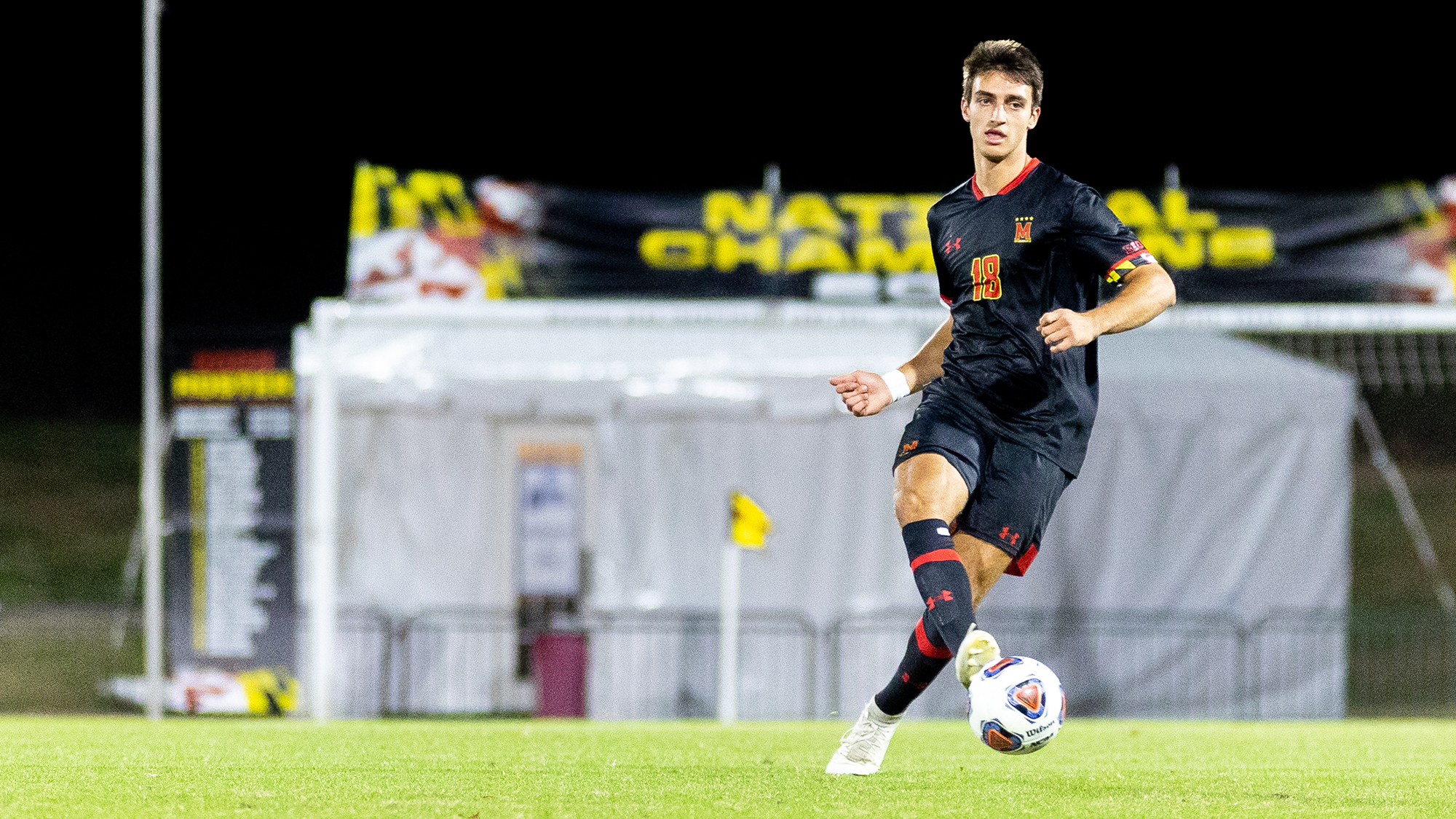 Chris Rindov passes the ball downfield during Maryland men's soccer's 1-0 loss to Long Island in the first round of the NCAA tournament on Nov. 18, 2021. (Julia Nikhinson/The Diamondback)

Colin Griffith reached his left foot out to tap in a low, driven cross from Joshua Bolma. Wildcats goalkeeper Jassem Koleilat could only raise his hands in anger as the ball hit the back of the net, doubling Maryland men’s soccer’s lead in the 75th minute.

The freshman’s first collegiate finish allowed the No. 20 Terps to hold on against No. 9 New Hampshire in a 2-1 victory. Maryland’s season-opening win handed the Wildcats their first regular-season loss since Nov. 1, 2019, when New Hampshire fell 1-0 to Albany.

“He’s been a talent from day one,” Malcolm Johnston said of Griffith. “I think he’ll score more difficult goals in his life, but you gotta give it to him. He’s right off the defender’s shoulder and in a perfect spot. So, first of many for him I think.”

Maryland took an early lead in the 14th minute after Bolma played the ball to Nick Richardson, whose first-time cross found the head of Griffin Dillon. Dillon squared his header across goal, bouncing once before Hunter George swept a half-volley just under the crossbar.

George’s finish was his third in three games after scoring in both of the Terps’ final two preseason friendlies.

“We’ve put a lot of work in this summer,” George said.  “Ever since the LIU game we’ve all been thinking about it. I’ve been here since early June, a lot of people have been here too, so it felt really good. I think it feels good for everyone to have a great first game.”

Bolma was influential for Maryland in possession and transition throughout the game after starting as the attacking midfielder. He played a role in the buildup to the first goal, assisted on the second and nearly scored himself.

Stefan Copetti found Bolma in the 39th minute just outside the penalty box. He cut the ball onto his right foot, but his low shot just curled wide of the post.

Just four minutes later Richardson drilled a low shot at Koleilat, who could only parry the ball to the center of the penalty box. However, Griffith’s off-balance follow up sailed over the bar.

Maryland was able to connect the ball well in the first half, retaining 54 percent of possession and winning three corners. The Wildcats ventured forward but failed to register a shot on target in the opening 45 minutes.

“I’m absolutely delighted with the performance and the result tonight,” coach Sasho Cirovski said. “That was a national contender in New Hampshire and basically, we came out and we were on the front foot from beginning to end.”

Maryland’s defense was able to repel an experienced New Hampshire attack until the 83rd minute. Bilal Kamal scored on the Wildcats’ first and only shot on target, but the finish ended up being only a consolation as the Terps held on in the final seven minutes to win.

“They’re very talented upfront,” Johnston said. “They were very tall and you know, you just got to outwork them in the air, outwork them on the ground and beat them to second balls and that’s what I think we displayed tonight.”