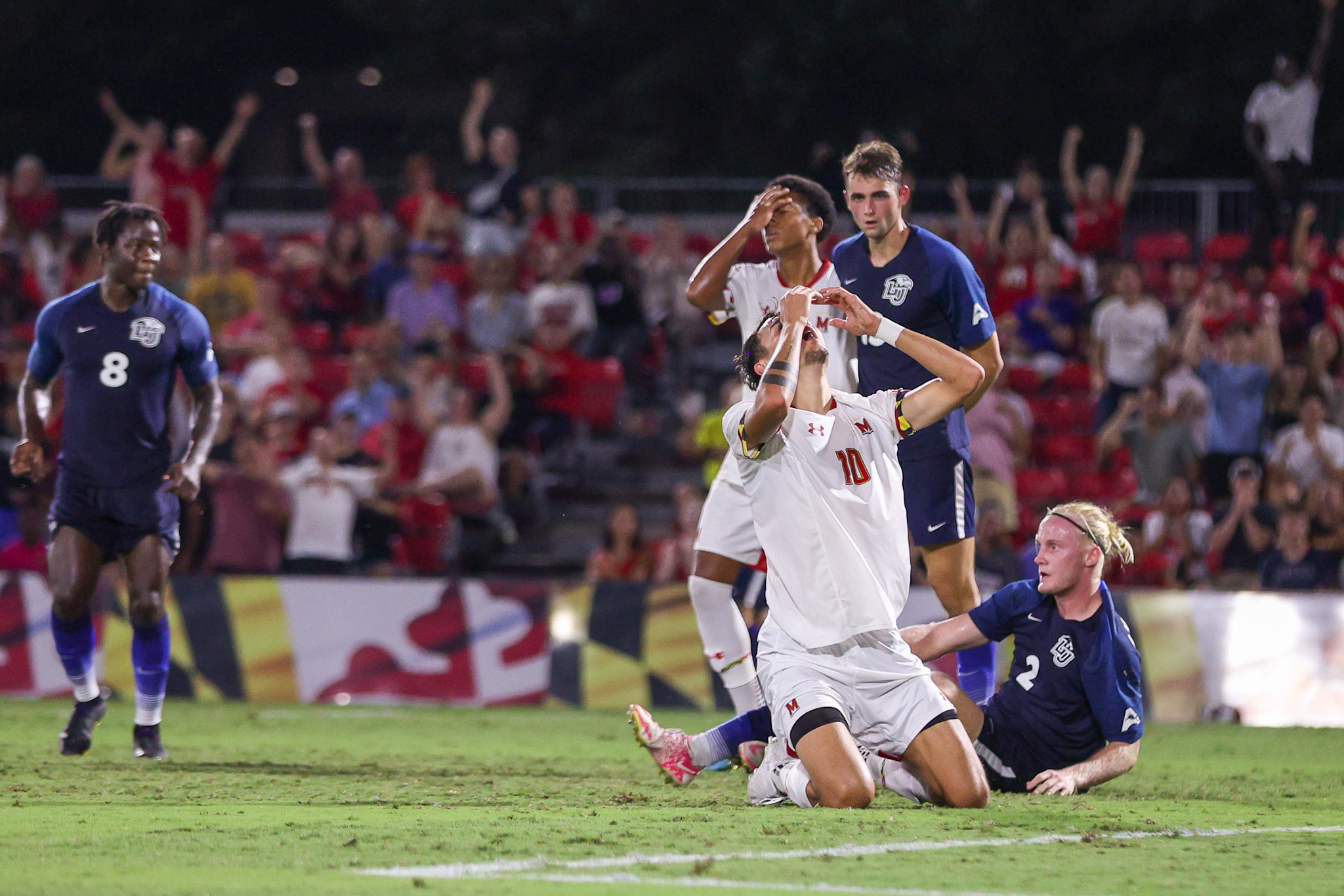 Joe Suchecki won a ball in midfield before turning and playing a curled pass over the top of Liberty’s defense. Joshua Bolma took down the perfectly-weighted ball well with his first touch but sent a late chance high over the goal.

The opportunity was one of a flurry of late looks No. 20 Maryland men’s soccer squandered as it succumbed to a 1-1 draw with Liberty. The Terps outshot the Flames 16-2 throughout the match, but couldn’t take advantage as they settled for a draw.

“We were in control of the game,” coach Sasho Cirovski said. “We had, I think somewhere around six high quality chances and we got one goal. They had zero quality chances in the flow of play, but had one on a set piece that they capitalized on.”

Bryce Swinehart scored the opening goal for the Flames in the 15th minute. The defender latched onto a flick-on header from Brandt Betts off of a Marko Mitriveski free kick and found the bottom corner to give Liberty an early lead.

The Terps pushed forward despite the early deficit as Hunter George cut inside and saw his low shot tipped past the far post. Maryland notched four shots after Liberty’s opener before finding an equalizer in the 31st minute.

George played a short corner kick to the top of the box to Nick Richardson, whose cross into the penalty box was met by Stefan Coppetti. The forward’s towering header was parried away by Flames goalkeeper Blake Franzen, but only as far as William Kulvik.

The defender deflected the ball over the line with his right thigh for his first career goal.

“I mean, it’s awesome,” Chris Rindov said of Kulvik’s finish. “I feel like from a defensive standpoint, it’s a big positive, but it was a great header back from Stefan [Copetti] … I think we just keep getting a few more of those and we’ll be good.”

The Norwegian’s equalizer canceled out Liberty’s goal, which came off its only shot of the first half, and sent the teams into halftime tied at one. The Terps kept 62 percent possession and outshot the Flames nine to one in the opening half but couldn’t find the lead.

Both sides struggled at the beginning of a choppy second half. Maryland notched just two shots in the first 22 minutes of the period before Liberty finally registered its second shot of the game, a tame free kick by Mitrevski caught by Jamie Lowell.

The Terps grew into the game and created multiple chances in the final 15 minutes. Bolma’s opportunity was quickly followed by a strong Copetti header that flew just past the back post in the 79th minute.

“We take it as pride that we want to win every game and unfortunately we started to press a little bit too late,” Alex Nitzl said. “Like we saw at the end, we had a lot of chances, that we have the quality to win games like this. We just gotta finish off our plays and we got to be a little bit more focused on the details, be a little bit more clinical.”

Luca Costabile brought the ball down with his chance and flicked a pass to an oncoming Bolma in the 82nd minute, but he shanked his shot well wide of goal as Maryland began to throw more players forward.

However, the Terps failed to find the winner in the final eight minutes. After starting the season with a victory over No. 9 New Hampshire Thursday, Maryland couldn’t overcome the pesky Liberty defense in its second match of the season.

“Bottom line, I don’t like tying,” Cirovski said. “I was not happy with the result, but it’s an opportunity to teach lessons to remind our players of our standards.”