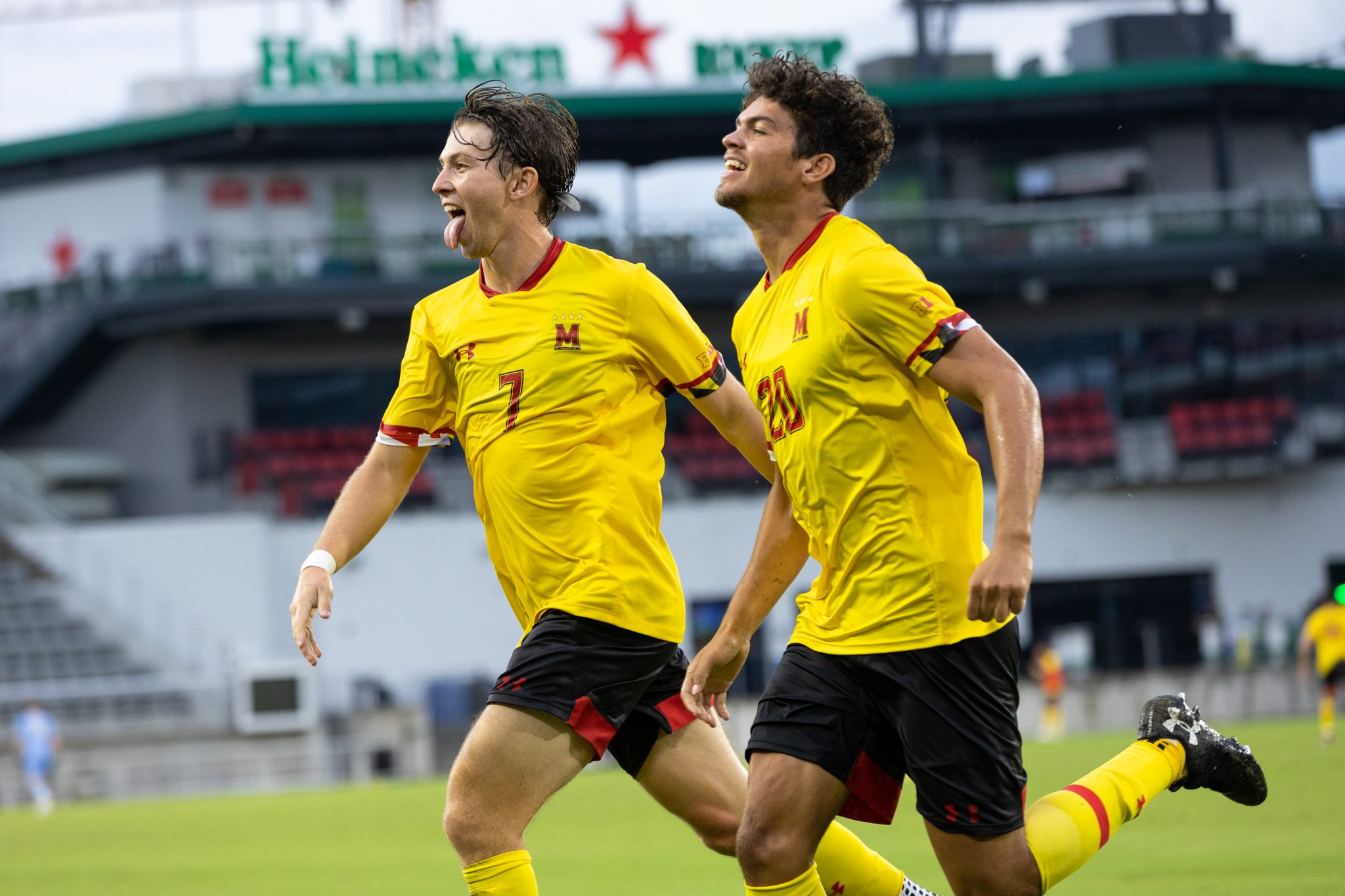 WASHINGTON, D.C. — Virginia goalkeeper Holden Brown went to hand Malcolm Johnston the ball before dropping it to the ground. Brown stared down the midfielder as he retreated to his goal line, preparing to face the Terps’ first penalty kick of the season.

Johnston stepped up and found the bottom right corner as Ben Bender did in the same fixture last season, sending Brown the wrong way once again. The Canadian brought his finger to his mouth to shush the opposing goalkeeper before blowing a kiss to the traveling Crew fans at Audi Field, celebrating the first of Maryland’s six goals on the night.

The No. 9 Terps created better chances and dominated throughout their 6-1 rout of the Cavaliers at the neutral site Monday. Maryland won its second straight edition of the local rivalry after defeating Virginia 2-1 last year.

“I’m really, really proud of the team performance tonight, it was an inspired response to a disappointing performance on Friday,” coach Sasho Cirovski said. “From the first whistle to the last whistle, I think our guys played with a tremendous amount of pride. Our defending was relentless, our attacking today was ruthless for the first time all year.”

The result was the Terps’ largest thrashing of the Cavaliers since 1975, when Maryland also won 6-1.

Freshman Colin Griffith won the penalty that gave the Terps their opening goal in the 21st minute. Hunter George’s pass met Griffith’s run behind the Cavaliers’ defense, forcing Will Citron to scythe the forward down. Johnston’s calm finish gave Maryland an early lead.

Alex Nitzl won the ball in midfield in the 42nd minute before lifting a pass with the outside of his right foot down the line to German Giammattei. The forward dribbled at his defender before finding the late run of Justin Harris, who slotted his second career goal under Brown to double Maryland’s lead at halftime.

“Coming off a disappointing loss last game, I think we had something to prove,” Johnston said. “The battle of the DMV, this is one of the bigger games that was marked on the calendar and as you can see, I think we had a lot of energy … We have the ability to score goals so it was very exciting that we were able to get six against Virginia.”

The Cavaliers earned a penalty of their own at the start of the second half, pushing further forward after failing to notch a shot on target in the opening 45 minutes. Leo Afonso fired a shot that Niklas Neumann got down to stop, denying Virginia’s top goalscorer a tally.

“To Virginia’s credit they got a penalty kick and to our credit, Niklas makes a huge save,” Cirovski said. “Big plays in soccer games can shift everything. And for us that was another energizer, and then we responded really well.”

[Maryland men’s soccer has thrived thanks to the versatility of Alex Nitzl, Joshua Bolma]

The Cavaliers quickly rued their missed opportunity. Just five minutes later, Chris Rindov leapt over a host of Virginia defenders to extend the Terps’ lead to three. The goal was assisted by Joshua Bolma, who stepped onto the field for the first time just a minute before Rindov’s goal.

Bolma assisted on Maryland’s fourth goal in the 65th minute, linking up with Griffith before finding Griffin Dillon with a low cross. Dillon fired his first-time shot into the back of the net for his first career finish.

The Ghanaian found the back of the net himself 11 minutes later, latching onto a loose ball and firing it past Brown to make it 5-0. He was substituted off 17 minutes after coming on, finishing with a goal and two assists.

“I’m playing Josh too many minutes,” Cirovski laughed. “I need to play him fewer minutes, that’s the outcome from tonight … I’m gonna tell him that in the locker room.”

Maryland and Virginia traded goals late, with Giammattei finding the back of the net for his first career goal for the Terps in the 83rd minute. After their first loss of the season on Friday, the Terps’ thrashing of the Cavaliers will give them momentum in another short trip to Washington, D.C. on Saturday for their matchup against No. 19 Georgetown.

“It was more like the kind of Maryland team that we should be,” Cirovski said. “Hopefully tonight was the sort of finding our identity a little bit, and finding the feel, how it should feel to play like that. I’m just really proud of the guys, I thought it was a total team effort from beginning to end.”