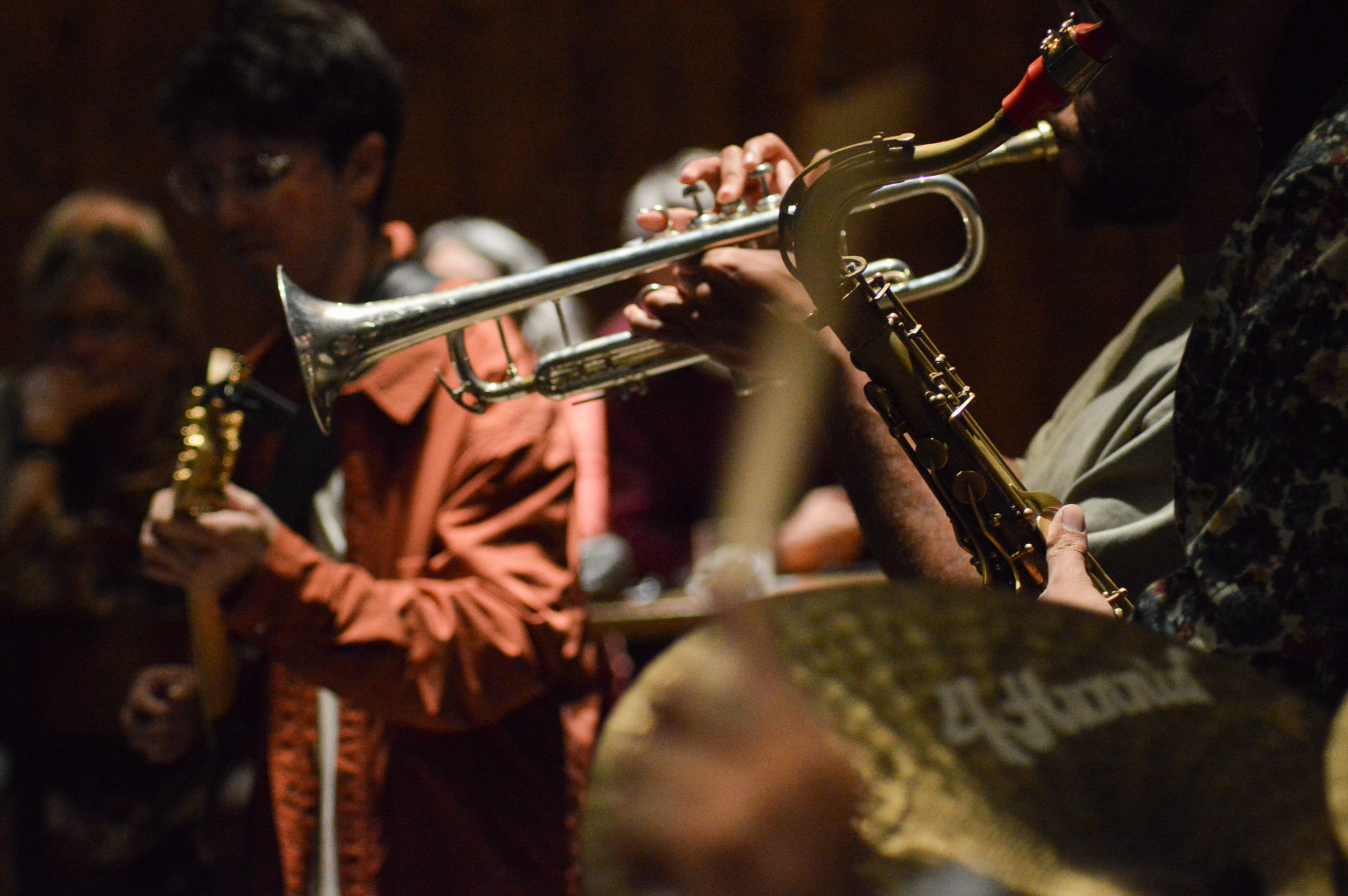 University of Maryland students and jazz lovers gathered at The Hall CP alongside professional musicians Wednesday night for a jazz jam session.

The new monthly series is presented by The Clarice and hosted by Washington, D.C.-based saxophonist and band founder Elijah Jamal Balbed. The event gives jazz students at this university an opportunity to hone their craft and learn from professional musicians.

“It’s the most fun you can have,” junior music education major and saxophonist Abby Jones said.

The Hall was crowded, with every table in the room full. The music lasted a full two and a half hours, with the musicians playing right up until the last minute.

The jam featured Brandon Woody, who lent his trumpet expertise to the house band and student musicians. As a Clarice visiting artist, Woody performed with his band UPENDO at The Clarice Thursday as well.

“[Woody] has been just killing it and sounds better and better every time I hear him,” Balbed said.

Balbed and the house band opened with their own set, then were joined by Woody. After, the session was opened to other musicians so students could play alongside Woody, Balbed and the band.

“It’s great to see the people who we know from school and classes and stuff just cut loose,” Henry Sheppard, a sophomore jazz guitar performance and economics major, said.

Students performed on a wide variety of instruments: trumpet, saxophone, drums, violin and guitar. Graduate student Gerson Lanza’s instrument was a portable wooden board and his tap shoes.

“Tap dancing is music,” the fine arts, dance and performance studies graduate student said. “And it’s definitely an instrument to spread the love and share.”

For the event organizers, jazz jams were a formative part of their own music education.

“A huge part of how I really learned how to play was going to jam sessions,” said Balbed, who grew up watching live jazz performances in the Washington metro area. He said being able to play with older, more experienced musicians was a part of what made jams so important to him.

“Just hearing those cats and feeding off of their energy from decades and decades of performing and living the music, there’s something that can’t be replaced,” he said.

Jams provide what Balbed calls a perfect combination, allowing students to practice what they’ve learned in school while also being exposed to the vibrant Washington, D.C., jazz scene. The city has had a thriving jazz community since the days of Black Broadway, a Black community on U Street where artists such as Duke Ellington, Cab Calloway and Louis Armstrong once played.

“Those who know, know that there’s a great scene here,” Balbed said.

Austin Sposato, the artistic planning coordinator of music at The Clarice, has wanted to start a jazz jam since he came into his current role.

“When I was in college, this was my favorite thing every week,” he said. “To be able to start one is a total joy.”

Jams will be held on the last Wednesday of every month school is in session. The next one will be on Oct. 26.

“I wish it was a bigger thing that we could do more often, but it’s really special,” Jones said.

Maximilian Jacobs, a first-year graduate student studying classical violin, joined in for the last song of the night.

“I’ll be back next month for sure,” Jacobs said.