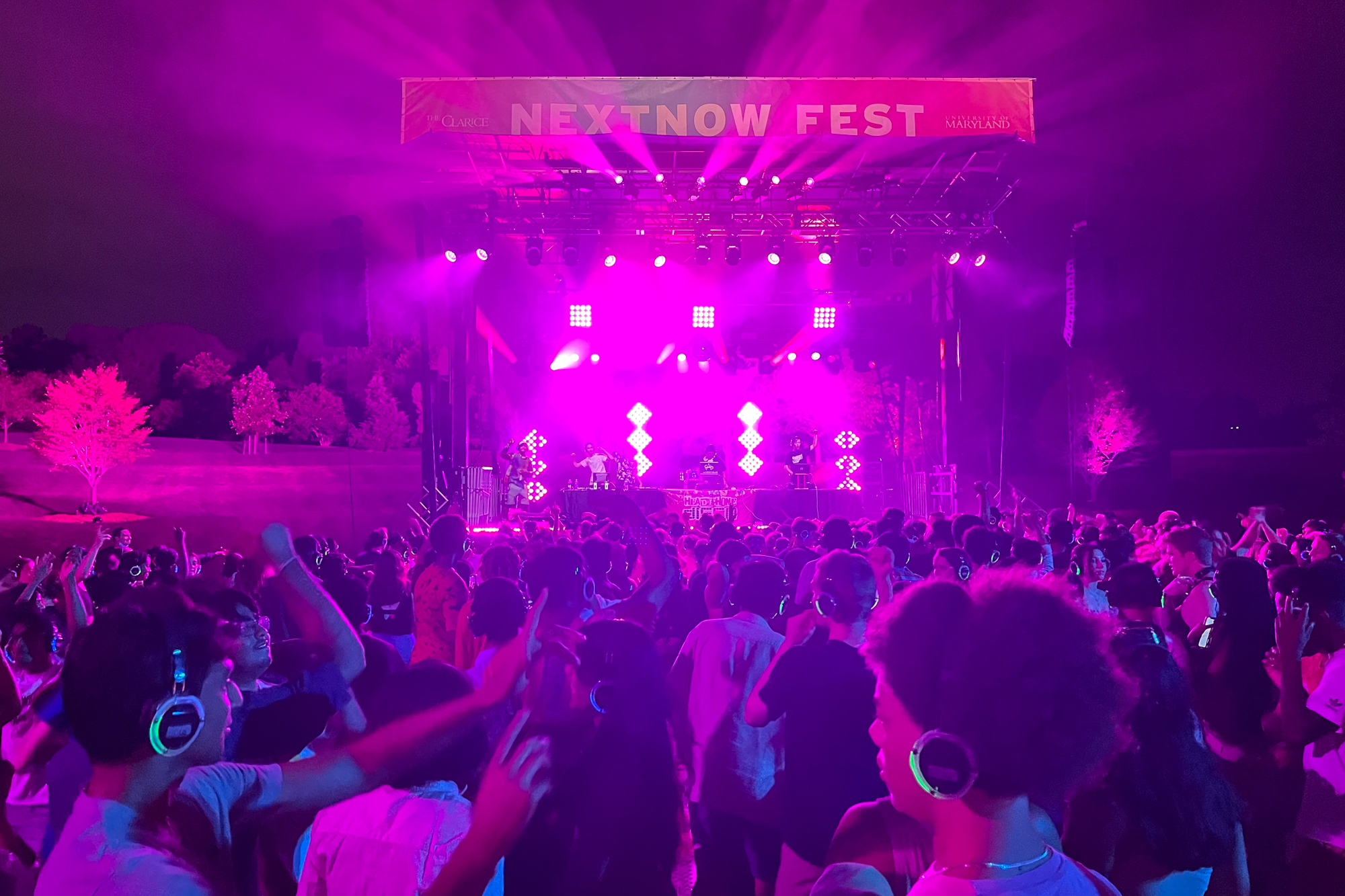 Purple lights lit up the rain falling in the outdoor courtyard of The Clarice Smith Performing Arts Center. Hundreds of people danced in the rain, headphones donned, as they jumped up and down to music only they could hear.

NextNOW Fest, in partnership with Student Entertainment Events, put on its sixth “Silent Disc-Glo” Sept. 10, going into the early hours of the following morning. The dance party closed out NextNOW Fest, a five-night annual event hosted by The Clarice.

According to the Silent Disco Company, this kind of event has existed since 1969, but started to gain popularity in 1990. Rather than having music blasting off of a stage, attendees wear wireless headphones to listen and dance, often with the option of several different types of music.

This year, for the first time, the Disc-Glo featured three channels: red, green and blue. Two of them, red and green, were operated by the company Headphone Disco and played different kinds of music. The Clarice’s artistic planning fellow, Maggie Letvin, suggested adding the third channel, blue, for students to DJ on.

[A beginner’s guide to the strange world of film festivals]

The channel was given to Terrapin Record Label, a music label run by students at this university for local artists, and featured three student DJs from the club, said Megan Pagado Wells, The Clarice’s artistic planning program director for festival arts.

“I thought [Letvin’s idea] was a really great way to increase the student involvement in NextNOW Fest,” Pagado Wells said. “It’s great to also be highlighting student creativity and student artists in this event.”

The event featured a second new addition: The Lucky Penny Bar. The bar was created by Selena Malott, a graphic designer who has run her own company for more than 20 years. Nestled in a small trailer, the bar served a variety of drinks.

Malott worked with Pagado Wells and Letvin to come up with mocktail drink ideas for the event. They ended up landing on three unique drinks for students.

“I think it adds a really great dynamic to the night and to the festival,” Pagado Wells said. “After a night of dancing, you want a refreshing beverage.”

Senior physiology and neurobiology major Narayan Spaur was the first student DJ to perform. Spaur said he loved the atmosphere and visuals of the event. He enjoyed being able to share his original house music and songs from an older generation of music.

“I wanted to end it with something unique that other people wouldn’t play, so I did disco and some older hits, like the Beatles,” Spaur said.

The second DJ, junior marketing major Pravas Dhakal, said he really appreciated the opportunity to perform beside professional DJs and interact with the student body.

Freshman biology major Maiya Kim came with her friends when they realized it was the last day of the NextNOW Fest. She said the music on the Terrapin Record Label channel was really interesting.

“I had never heard a lot of songs they played on the blue channel,” she said.

Amarachi Ugboh, who graduated from this university in 2021, said she thought the event would be a great opportunity to catch up with a friend. She had been to the event during her time as a student and really enjoyed it, but having the student DJs made the event even better, Ugboh said.

“It makes them more current,” she said. “They know what we like, and they can understand the crowd better.”

Cliff Ritch, who graduated from this university in May, said he really liked the music choices by the artists. He had been to a silent disco before on a cruise, where there were two channels — one for the older people and one for the younger people.

He loved that the Silent Disc-Glo had “classic” songs everyone in his generation would know.

Freshman biology major Walter Brown decided to attend the event because he was bored and always looking for new things to do, but said he felt disappointed with the music choices. Brown, who is a person of color, said there wasn’t enough music he would want to listen to, and there should have been more rap and hip-hop music.

This year’s event allowed the production team to push the boundaries of what could be done, Pagado Wells said. She is interested in doing more silent discos during the school year and involving more DJs.